“I Never Say ‘No, We Cannot Do It’ to My Director”: DP Sviatoslav Bulakovskyi on Klondike 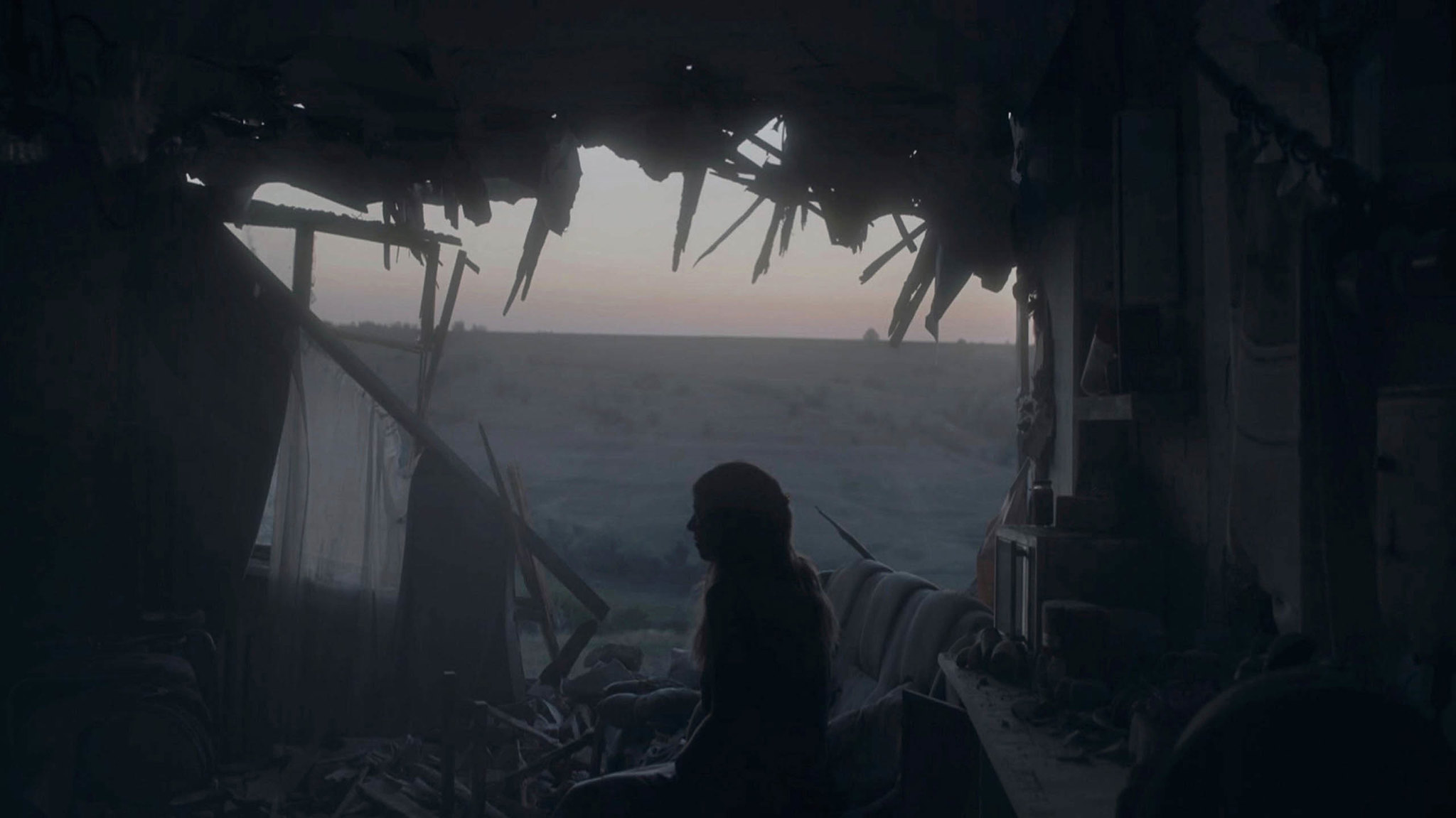 In July 2014, during the Donbas War, Malaysia Airlines Flight 17 was shot down over the Donetsk region of Ukraine, a pair of expectant parents living in the disputed Donetsk region of Ukraine by pro-Russian rebels. This is the backdrop for Maryna Er Gorbach’s Klondike, which follows a pair of expectant parents to find their hopes of raising a child in relative piece dashed by the differing loyalties of her brother and his friends. Cinematographer Sviatoslav Bulakovskyi explained how he scouted locations during a COVID lockdown and how his experience taught him to always prepare for the unexpected.

Bulakovskyi: Early on in this project I was supposed to be a producer only because director Maryna Er Gorbach and I decided to make a movie on our own without involving the big film companies. It was my first producing experience, and to combine movie producer functions with camerawork seemed to be impossible. A particular challenge was that the shooting needed to take place in an expedition, and this implied a number of additional issues which I, as a producer, had to resolve.

When we obtained funding, there was a lockdown announced throughout the whole world. Transport, hotels and cafes stopped working during the period. But, not to waste time and thus not to lose summer for shooting, I made a sleeping place in my car, got some canned food and went looking for locations. We couldn’t have the set in close proximity to hostilities that would risk our crew’s lives; that’s why I had to drive across Southern Ukraine, as that area was mostly similar in landscapes to the occupied Eastern territory where the events of the film take place. I slept in fields, on the seashore, in abandoned villages and finally found a perfect location not far from Odessa. I was impressed by how careful the director was in developing the general style of the film and also making the scenery as convincing as it’s possible.

It was a challenge to build a full-fledged brick house in order to make everything authentic in the dramaturgy.

The preparation was really difficult, and it became apparent that undertones and visual display of emotions and conditions which sometimes can’t even be put into words would be extremely important.

And for that matter, responsiveness and mutual understanding were integral. Given that Maryna and I have been friends since university and we have filmed some projects on 16mm and 35mm, [some] experimental films, and worked together abroad, we came to a conclusion that I should be the camera operator as well.

The most necessary qualities were commitment, the ability to rapidly react to new inputs and optimism. I never say “No, we cannot do it” to my director; I ask for time to understand and realize what she imagined.

Bulakovskyi: The main graphic task was not only to tell the story of certain characters but also to tell the story of the author’s feelings about the dramatic events. Klondike’s camera is Maryna’s point of view on her feelings, [which show] the exact same atmosphere where her characters turned out to be. We would like for the audience not only to watch the film but to experience everything the heroes feel as much as possible.

When a person is in the thick of it, they cannot objectively assess the situation because they do not see the full picture. And when the war begins, not everyone is able to properly comprehend the action. And if a house is hit by a shell—destroying not only walls but also a part of life—a person feels fear, pain, wrath, powerlessness. They see irreversible consequences not knowing who shot, where the shot came from, whether it was a coincidence or whether a sniper aimed at the certain house.

Real life is not a film where the events are shown in detail from different perspectives. This is the exact perception we would like to show in the film. The camera in our movie seems to be independent from the heroes—it is watching not them, but the atmosphere in general. For example, during a panoramic shot, the movement is even, without any acceleration and deceleration, regardless of the actors’ movements. The camera doesn’t adapt to them. The camera can get ahead of them or, on the other hand, be left behind by them or even leave the events outside the frame of the shot.

For some frames we established the camera and the actors on the same platform and moved so that the movement was barely seen but the world behind the actors’ back seemed to move. Thus, we tried to show that even when something horrible happens and sends a person into a tailspin, the world doesn’t stop. Whatever happens, life is going on. To remember that is necessary and important.

Bulakovskyi: Maryna Er Gorbach and I have been friends and working for a long time but when working on Klondike we learned to understand each other perfectly. We were in search continuously, not quite knowing how to convey to the audience what we feel and what we want to share. Of course, we were looking for references, but the most important was that we were creating non-stop and honestly shared our thoughts and feelings.

When working with Maryna on our term project at university, I understood the significance of the continuous creative search. Imagine that you have already found cool decisions, made a storyboard and started technical development of the task but suddenly in a few days a director tells you: “No, we do it another way.” You completely give up on the approved concept and start developing it all over again. And once you approach a completion point, suddenly a director says “no” again and offers an absolutely new idea. At a certain point after another such radical turn I started to think of these situations as mental exercises. The very search for variants of decisions became interesting for me, and I got curious: what other methods can help accomplish any given task? I stopped getting upset that I had to redo everything, and such a style of work turned into a challenge to my imagination and resourcefulness, awakening more interest and excitement.

Nowadays I can say with confidence that my approach to the on-set work, the ability to think of possible variants and, if needed, to quickly adapt to unexpected circumstances formed in my work with Maryna.

Bulakovskyi: Given that I combined two positions on the project, there was a constant struggle between operator and producer inside me. I had to balance the creative desires against the necessity to remain within budget. But it was great in its own way because weighing all pros and cons I could find myself making financial trade-offs in order to make a decision in favor of the artistic component.

Bulakovskyi: We decided to shoot with an Alexa Mini LF. Due to the full matrix we wanted to achieve more detailing and plasticity within the frame. As for optics, I used a Cooke S7/i. Due to their softness, these lenses were most suited for our task.

Actually I prefer working with Alexa cameras. They have, in my opinion, more flexible and cinematic image, as opposed to analogues.

Bulakovskyi: It was important to achieve light as natural as possible in this film. Along with this, we tried to ensure that [the] image and light were soft and not contrast[-y as a] counterpoint with the harsh events. Fulfilling this task became more difficult when one wall was destroyed in house scenery [that was] built in a real village. Set-ups were lined up so that actors in the same frame were both inside and outside the house. On bright sunny days, the difference between interior and exterior achieved 16 diaphragms and it was [necessary] to level this contrast.

For this, first we filmed such scenes while sun was [in] contrast and getting to [illuminate the] floor through a huge hole in the wall [that] gave additional filling. Second, to make light more natural, I set the main [fill light] inside the house to reflect from the floor, channeling big lighting apparatuses into a light piece of linen fabric spread on the floor. Since the scenery walls were not sliding, I also stretched out flat carpet light on the walls, which [was] allowed not to occupy space with additional generously proportioned devices. Third, seven meters from the house I put a huge black mesh frame over the entire hole in the wall which allowed [me] to take away 2 more diaphragms from the background and, due to the distance, [for that] to be imperceptible for the camera.

What about exterior scenes? Generally they were filmed in critical hours or while the sun is low. On several occasions the best takes that made it to the film were shot almost on the verge of illumination.

Bulakovskyi: There was not any easy scene, you will see. Technically, the hardest was the opening scene of the film. Maryna said “It will be dream, it will be life, it will be death, it will be morning ( 04:35 in the morning exactly, because we need exactly that color) it will be a single-framed one with a 360° panoramic view and it will have VFX because visual effects are not a miracle and we need a miracle on set.

What can you answer to that? My grandfather was an inventor, and I believe in the author’s image so deeply that we can invent the way to shoot it.

Bulakovskyi: I can share my impressions about Klondike when I watched it for the very first time. It impressed me how all those parts of scene puzzles worked out in one movie. I hope the viewers will be touched by our work.