“You Couldn’t Write This Story; No One Would Believe You if You Did”: Editor Berny McGurk on My Old School 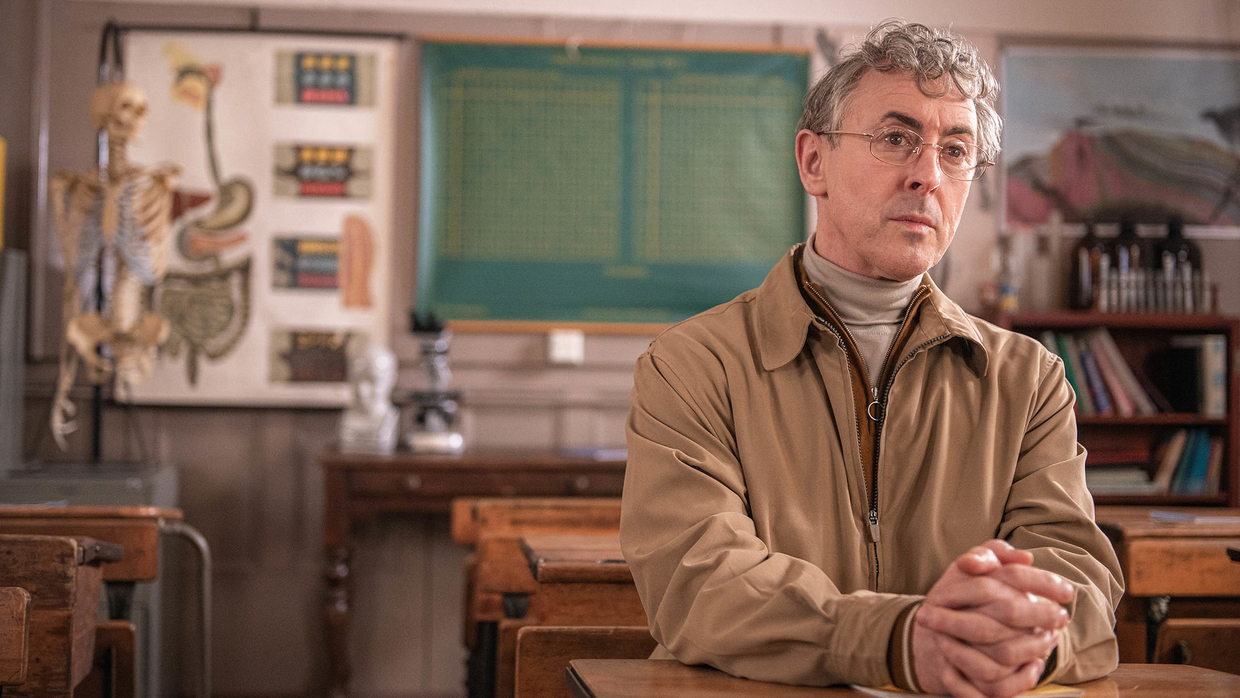 Brandon Lee, 16, moved from Canada to Glasgow and enrolled in Bearsden Academy after the death of his mother, where he impressed teachers with both his knowledge and his temperament: he protected bullied students and helped bullies reform. In My Old School, director Jono McLeod, a former classmate of Brandon, investigates his story. Below, editor Berny McGurk discusses his first experiences in the industry as a teenager and the importance of not overloading the audience and making sure every reveal lands when telling a true story with countless twists.

McGurk: I have done a lot of work with Hopscotch, the core production company, over the years. They are a really unique company who make feature films, dramas and TV documentaries. I cut both drama and documentary—I don’t specialize in one particular genre—and Hopscotch told me they had this film. I was living in London at the time when the story first broke, but I remembered it vaguely. I then met Jono McLeod, the director, at Film City. He showed me the trailer and, after I lifted my jaw off the floor, I said “definitely, I want to do this.”

McGurk: The main goal of the film is to tell this unique story and make sure that the jaw-dropping plot points happen in the right place. When the film picks up there is just one twist after another and there is so much information. There are so many nooks and crannies that are loaded with story points that we had to make sure there was enough space in the edit to digest them, otherwise they will wash over you. The film itself changed as we went along; for example, the lip syncing with Alan wasn’t a part of it originally, so the visual aspect of the film changed. We had to be very careful as we went along, as we go back and retell the story from another point of view, so we had to do that in a way that wasn’t confusing. One of the biggest challenges was to make a complex story quite simple.

McGurk: The process changed—the genre of storytelling changed as we went—so we had to take time. Good editing takes time. The two editing techniques were really drama and documentary. Even the animated scenes are drama. We had to work out parts of the story where we were lighter on evidential footage but that we knew were true. The film also featured characters who we could not interview. How did we illustrate them? We did not want to bend the truth, and the animations were borne of the interview and archives and we reflect them in an entertaining way. At first it was as much a period drama as a documentary, but those goals changed, and the form of the film changed as we progressed. I think my experience as a drama and documentary editor helped us shift the genres when we realized we had to go another way to tell the story.

McGurk: I didn’t come in via the traditional route of a film and media course. I grew up in two small towns in Scotland, Alva and Tillicoultry, in the mid-eighties and, when I was young, two filmmakers moved up from London to Alva and set up a film and video workshop. One of guys was Russell Fenton, a film editor, and the other Bill Borrows, who had worked for the Film and TV union. They came to my youth club for a project to get kids involved in making films, and we made a wee short film about a bank robbery. We got the local police involved, filmed wee car chases, and I loved it. The film was screened at the Ed Fil Fest and was the perfect example of great community engagement.

Russ was still editing feature films and docs and had been offered an eight part series about American architecture for PBS directed by a Scottish arts director, Murray Grigor. I was offered the job of trainee assistant editor. I was only 15 when we began work on the series and I was still at school, working in the evenings before eventually going full time. It was all shot on film, and I was working in old school cutting rooms, handling the film. It was amazing training, such a methodical approach and grounding of how you mechanically and creatively make a film and tell stories.

I made a few documentaries with Murray and then went on to work on a film with him called Play Me Something starring Tilda Swinton and John Berger and directed by Tim Neat. We edited it in Alva. That was my grounding in drama feature filmmaking, and I climbed my way up the ladder from there. I went on to work with Stuart Cosgrove and Don Coutts for their Big Star in a Wee Picture company, where they made me editor when I was still only 19. Later, I went on to a Film and Drama MA at Sheffield University and went straight to work for Muriel Gray’s company, Gallus Besum, picking up where I left off. I moved to London for seven years, working for MTV among others, and lived and worked in LA for a year before coming back to Scotland in 2001.

McGurk: I was using AVID Media Composer to edit the film, but there would be bits and bobs that would be filmed where Jono would step in and do additional editing. He was working on Final Cut Pro, so my assistant, Scott Bilsborough, was tasked with moving the project from Avid to Final Cut and back again, and we did that a few times over the years.

McGurk: This isn’t one scene, but the point in the film when the truth starts to emerge. It’s a section in the film when identities are revealed and when we start to unpack the truth. We bring in news archive footage, paper stories and the means of how we retell the story changes again. This is where you get a hundred plot twists a minute and we had to be careful about how we landed them, who revealed what and what media we used to tell it. A lot of this was new information that had never been told before, which Jono had uncovered while investigating the story, and we had to make sure we landed it properly.

McGurk: At the end of the film, it confirmed my long-held belief that the truth is always stranger than fiction. You couldn’t write this story; no one would believe you if you did. A lot of new information was discovered by Jono during the process of making the film, so it wasn’t so much a big reveal at the end for me, but how the story emerged as we went along. It was hugely exciting to see this unfold; however, I believe it’s a story that is told sensitively, that is not sensationalized, and that Jono believed he had a duty of care to everyone who took part. A massive part of the vision is Jono, who has fought for this film along the way. He is a very talented boy and a lovely human being with amazing empathy, which you need to be a good director. His vision for the film has been incredible.