A Restaurant’s Democratic Promise: Director Lisa Hurwitz and Her Doc, The Automat 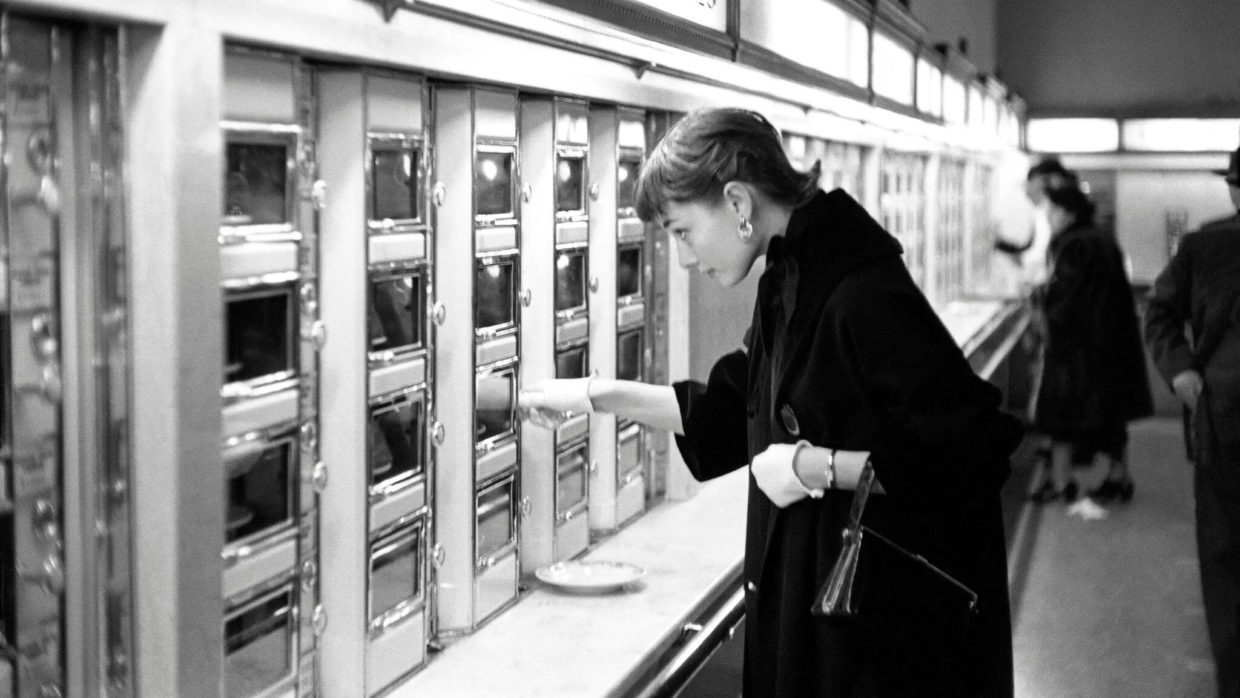 Audrey Hepburn ordering from an automat from The Automat (Photo: Lawrence Fried/Film Forum)

When The Automat director Lisa Hurwitz left her family’s home in Southern California to go to The Evergreen State College in Olympia, Washington, she found that the place where she was most comfortable was the school’s cafeteria, the Greenery. “I made new friends there every day and there was a different food every day,” she says. Hurwitz’s academic focus wasn’t film: “I took one documentary filmmaking  course, just before I graduated.” But she also had a job projecting 35mm movies at Olympia’s Capitol Theater, aka the Picture Palace, which was operated by the Olympia Film Society and was the venue for the Olympia Film Festival. Hurwitz started as the festival’s projectionist and ended up as its director. By then she also had what she at first thought of as a hobby. At Evergreen, she had started investigating the place of cafeterias – like the one she enjoyed so much — in American life, and she came across a Ph.D. dissertation titled “Trapped Behind the Automat: Technological Systems and the American Restaurant, 1902-1991.” The author, Alec Shuldiner, is credited as one of The Automat’s co-producers, and his on-camera descriptions and explanations are invaluable, especially for viewers who, like Hurwitz,  never set foot in a Horn and Hardart Automat.

I grew up in New York, and in the late 1940s and early ’50s, my father sometimes took me to one or another of the many Automats, usually the one at 33rd Street and Seventh Ave, where he could get a good cup of coffee and a slice of chocolate pudding pie before we went to a matinee performance at the Metropolitan Opera House, then on West 39th Street. My mother was with us too, but she wasn’t fond of the Automat, although she appreciated that it was very clean. I loved the room itself with its high ceilings and design elements that combined industrial and Art Deco. The tabletops and floors were marble, the fixtures were made of brass and the rows of small rectangular windows on the walls were also framed in brass. Those windows were what distinguished the Automat. Next to each of them was a coin slot. You put in the requisite number of nickels, the glass door opened, and you pulled out your chosen food. The coffee poured from a dolphin-shaped spout, hot and exactly the amount to fill a single cup, plus just a touch of cream. No menus, no wait staff, which, as I learned from Hurwitz’s movie, was one of the things that made the Automat appealing to immigrants. They didn’t have to speak or read English to get what they wanted. You could look through the glass windows and see creamed spinach (my favorite) or mac and cheese. The Automat, which was for decades the largest and most profitable restaurant chain in the US, only existed in two cities, New York and Philadelphia, both cosmopolitan in the sense of their diversity, and both home to a large working class striving to join an energetic, proud middle class. What’s best about Hurwitz’s film are the connections made between the rise and fall of the Automat and larger changes in 20th-century America — in its economy, social values and political power. But in trying a little too hard to accentuate the positive, Hurwitz turns the closing minutes of the film into nothing more than an exercise in nostalgia at the expense of the big idea she skillfully implies up to this point: that the Automat embodied the promise of American democracy and its loss presaged the failure of something greater than itself.

As The Automat’s archival researcher as well as its director and producer, Hurwitz accumulated  a marvelous trove of photographs and film clips over the roughly ten years that she was in production, but the real treasures are the people she convinced to share their memories of the food, the atmosphere, and how the Automat was part of the fabric of a largely vanished New York City and Philadelphia. One of those people was Mel Brooks, who not only provided some of the film’s best anecdotes about his family’s Automat experience, but also wrote the film’s theme song, “(There Was Nothing Like the Coffee) At the Automat, ” which he sings over the closing credits. The movie begins with Hurwitz chatting with Brooks, as she will do throughout the film. He peppers her with questions about how she’s going to shape the film  and where it could be shown. Their dialogue sets up the communal, hands-on aspect of Hurwitz’s documentary, which captures, through the process of its making, what was best about the Automat experience. In our phone interview, Hurwitz talked about her process, which has been different from the customary route of applying to the NEH, the Sundance Labs, and PBS for documentaries about American history. I’ve condensed her answers to my questions into the account below.

The Automat is currently screening at New York’s Film Forum.

Hurwitz: I began the film in 2013. It was something I did in my spare time, like a hobby. As the producer, director and archival researcher, I was immediately involved in a lot of licensing of archival photographs and film material, and also in getting access to big names.

Filmmaker: Two of the biggest names are Ruth Bader Ginsburg and Colin Powell. How did you get them to participate?

Filmmaker: They are both essential, not only because they talk about the food and the ambiance, but they both specify how democratic the Automat was. Powell talks specifically about his experience as an African American child in the Bronx, and that for his family, buying a pie on Sundays from the Horn and Hardart retail shop was a treat. RBG’s experience was so much like mine. She did her homework there before her piano lesson, and she too also loved the creamed spinach. But she also opens up the conversation to  talk about the democracy of the Automat by saying that when she moved to D.C., she didn’t go to the Automat anymore, but when she was asked to speak at certain clubs, that, unlike The Automat, had restricted membership policies, she refused.

Hurwitz: Most of the people we interviewed were generous with their time, but Ruth only gave us four-and-a-half minutes. We used every word she said. We had a great camera and sound team in DC, Steve Cocklin and Ann Cocklin .

Filmmaker: Even for a documentary that was nearly ten years in the making, the credits list and the thank you list are extremely long. John Ramos,  who was the head technician for Horn and Hardart Hardhart, is extremely important. He died in 2017 ,and the film is dedicated to his memory. And then there’s Alex Shuldiner, whose thesis was your original inspiration. He’s a co-producer.

Hurwitz: He helped me with the history and held me accountable. At first, I did the editing with a few friends, but at a certain point, we realized that we weren’t really editors, so I asked Michael Levine and Russell Greene, who had worked on documentaries I liked, to come on. They were extremely busy, so when they weren’t available, I kept working with the assistants.

Filmmaker: And now you are self-distributing.

Hurwitz: We have a strong Facebook group and we’ve screened at Telluride and other festivals. For the Film Forum run, I’ve been working with their community partners. We have a theatrical release in Canada. I want to keep the film in theaters for a year. It’s a grass roots project.