“We Knew We Had to be Nude to Participate in This Space of Mutual Trust”: Ivete Lucas and Patrick Bresnan on their Tribeca Festival-Debuting Doc Naked Gardens 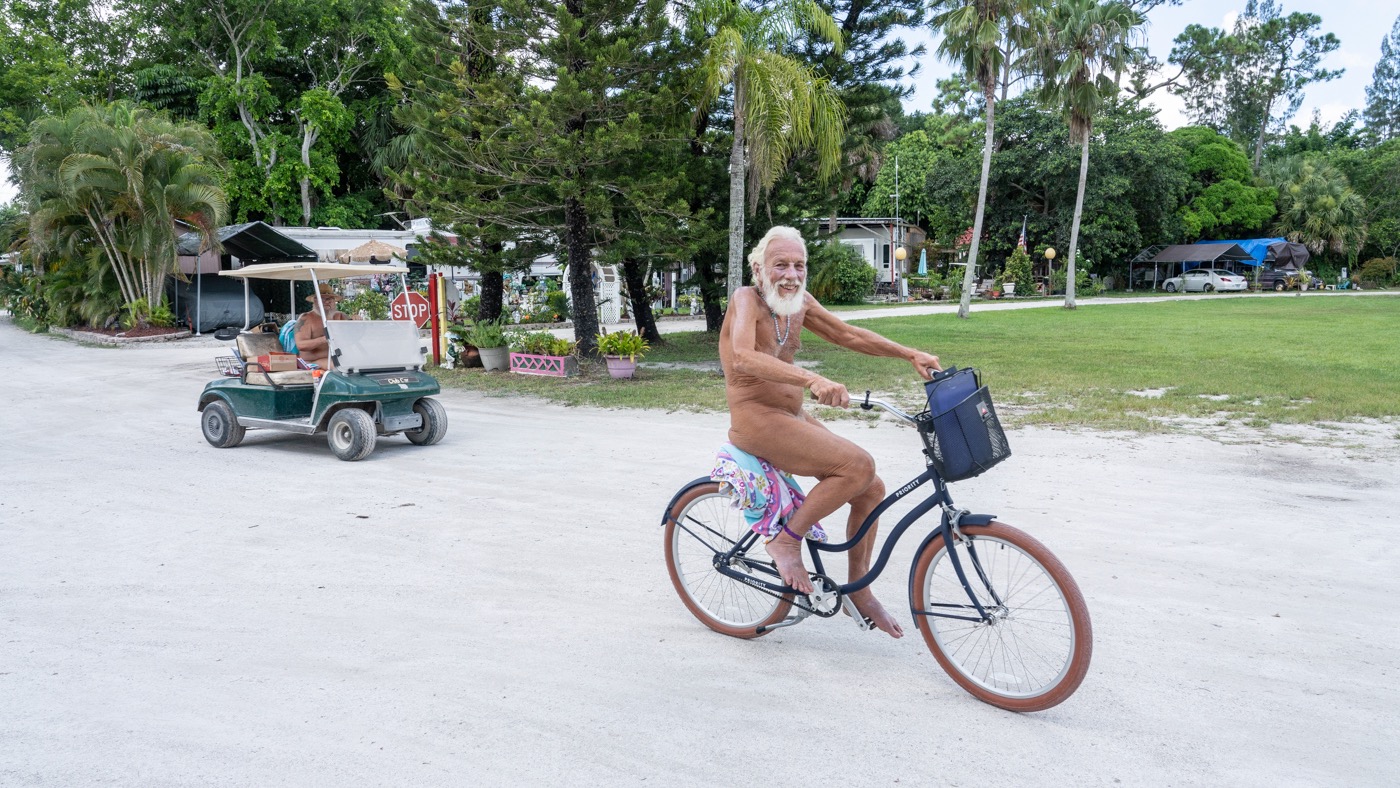 by Lauren Wissot
in Directors, Interviews
on Jun 10, 2022

The latest from husband-and-wife team – and 2016 25 New Face alums – Ivete Lucas and Patrick Bresnan (Pahokee), Naked Gardens is a nonsexual skin flick of sorts, a season-long vérité look at the residents of family nudist resort Sunsport Gardens. Tucked away in the Florida Everglades, and run by a hippieish, Gandalf-like owner named Morley, the paradisiacal enclave draws folks from around the country – those opposed to society’s strict clothing mandate, but also just gung-ho for the place’s cheap rent. A virtual melting pot of nonconformity, Sunsport Gardens is likewise a bipartisan haven where a family with kids from conservative Kentucky, a recently widowed lesbian, and an Afro-coiffed free spirit can together live their truest selves away from the world’s harsh judgment. And perhaps even escape from any personal demons. At least until reality sneaks up like sunburn.

Fortunately for Filmmaker, the duo behind this beautifully crafted cinematic portrait found time just prior to their Tribeca Festival Documentary Competition premiere (June 10) to give us the scoop over email on everything from guaranteeing uncensored onscreen nudity (a prerequisite for characters to even consent to participate in the doc) to agreeing to shoot in the nude.

Filmmaker: So how did this film originate? How did you even learn about Morley and his Sunsport Gardens nudist resort?

Lucas and Bresnan: We were recording our film Pahokee about 30 miles west of the nudist resort; we were at a Costco when a woman came up to Patrick in the parking lot and invited him to a bonfire drumming circle at the resort. (Based on his long hair Patrick was targeted as a potential recruit.) The resort really struggles to get young people to visit, so they have a drum circle on the first Friday of the month with no entrance fee. We actually had been reading about the resort periodically for years in the Palm Beach Post. The owner loves any kind of publicity, and the Post loves a good nudist story. So the resort was always on our radar as a place we wanted to learn more about.

The films we make are highly immersive, experiential pieces of direct cinema, and they take months of spending every day in an environment to make. We have to really want to have this experience in our own lives. We were very interested in nudism, in confronting our perceptions about our own bodies and the act of being nude in a social context. We thought this journey captured in a work of cinema would be a great way to challenge the portrayal of nude bodies on the big screen. The invitation in the Costco parking lot was really just a sign to us that we needed to get serious. So we wrote to Morley and set up a tour in which we inquired about his openness to allowing us to make a film.

Filmmaker: How exactly did you go about selecting and then building trust with your characters? I’m guessing your willingness to film nude might have played a big role.

Lucas and Bresnan: We usually start with a core protagonist that can serve as an entry point to the world. In this case, Morley, the owner, was very open to being recorded; so we began recording with him and also socializing with other members of the community without the camera.

Social nudity requires accepting to be vulnerable in front of others. It only works when you trust the people around you. So of course we knew we had to be nude to participate in this space of mutual trust. We spent a good deal of time naked, talking with people about how and why we make films, and in the process overcoming a great deal of fear we had about being naked around other people.

The majority of people who were open to filming felt that a film could be educational and counter stereotypes and falsehoods about nudists. After spending about a month researching we broadened our focus from Morley and retirees to families who were living there full time. Some were living below the poverty level and adapting to nudism to have a place to live. We wanted to show a variety of experiences because it is such a unique place, where nudism intersects with the housing crisis of South Florida.

Filmmaker: Though the great Diane Arbus was your inspiration for Naked Gardens, the film also made me think of Sally Mann, who took a lot of flack for photographing — some said sexualizing — her children naked. So how did this cautionary tale inform your approach to the kids? What were your discussions with the parents even like?

Lucas and Bresnan: We in no way want to build on the family images of Sally Mann with our work. Our goal with the film is to present desexualized images of the human body in cinema, and capture fleeting revelatory moments of a community that is on the verge of disappearing. Sally is the creator and designer of the deeply personal worlds she photographed, which renders some of her imagery unsettling to us. Especially as parents.

The imagery we recorded was very much influenced by Dorothea Lange in addition to Arbus. Some families at Sunsport were living in a form of poverty rarely seen in the US, and assimilating to a nudist worldview to survive. For us, what vastly differentiates this work from that of Sally’s — whose images are highly posed — is that we are documenting an existing community and allowing it as much as possible to be rendered free of our direction.

Families living in the resort were not new to the conversation of whether or not their children could be photographed. Everyone has a phone with a camera nowadays, and you obviously want to document birthday parties and big events. But, of course, making a film is very different. The discussions about filming with parents unfolded over several months. We would film with Morley and other adults, while also talking with the individual parents in social settings without the cameras to help them to get to know us. These conversations laid a foundation from which people could then decide if they wanted to be in the film.

We’re married, and Ivete was pregnant at the time, so that created a natural kinship. We were a family making a film about other families. In every conversation with the parents we reiterated our pledge of no frontal nudity of minors in the film and our belief that a film would help people outside of the community to better understand their lifestyle and practices. There are three families in the film and each had different motivations for being there. Only one family (on our poster) were true nudists, and we focused more on their motivations. We went to great lengths to be respectful of their lifestyle while filming with them and were equally respectful of their privacy when they did not want to be filmed.

Filmmaker: How involved do you get with your characters? Honestly, the only scene I found truly disturbing had nothing to do with nakedness. It was the one in which 11-year-old homeschooled Serenity is unable to count backwards from 20. Where is the line for you between filming people’s lives and intervening further in those lives?

Lucas and Bresnan: You’re not alone in feeling this way. The scene with Serenity is something that we thought about for a long time. When you document real life you will undoubtedly capture difficult moments, and you really have to think about what they mean and what your responsibilities are.

We are filmmakers and are not trained to deal with many of the things that we end up living through and sometimes capturing on film. We realized this while making Naked Gardens. So we partnered with a mental health consultant, a social welfare organization and a Florida law consultant, who worked with us from production through post production and the finalizing of the film.

For us it is very important to depict life as is, without oversimplifying things or telling the audience what to think. Life is complex. There are both positive and difficult aspects of the human existence, and no community is perfect. We feel this scene correctly depicts Serenity’s experience; and it also alerts the audience of a reality that children all over the United States who live below the poverty line are facing, which is falling behind on education. As filmmakers we felt this was important to show.

We always say that we are not just filmmakers, though. We are people who make films that emerge from a real bond and friendship with the people that we film. We become deeply involved in the lives of our protagonists. We are very conscious of the fact that we are not trained to help people at the level that they might need, yet we might have access to resources that they might not currently have. In the case of Serenity and her mother we offered to put them in touch with Adopt-A-Family of the Palm Beaches, an organization that helps families with housing and services. This organization has social workers that specialize in working with single mothers and teenage girls. They are currently working with them to find ways to better their situation.

Filmmaker: I found it interesting that the participants only agreed to be in the film if their naked bodies, including private parts, would not be censored in any way. I can’t imagine this would be an issue with festivals, but do you anticipate any problems with potential distributors or the streamers?

Lucas and Bresnan: To be very honest, we really hope to challenge the status quo with this movie. It is a very exciting time for doing this as there are many media outlets and streamers that are making their own rules regarding nudity, showing full male nudity and some variety of body types.

But although we quite often come across articles about Hollywood embracing nudity, it is still nudity that does not further notions of self-acceptance or explore a variety of non-celebrity non-manicured bodies. We want to go further with our film by portraying everyday people from different age groups with very diverse bodies that are not sexualized by our camera angles and lighting.

We have been very fortunate to have a sales agent, Amanda Lebow, who’s been onboard since the inception of the film, strategizing who to partner with. And we also have senior producers Roberto Minervini, Tabs Breese, Julia Nottingham and Matthew Perniciaro, who have garnered a great deal of respect from distributors. This is the first contemporary film to be made about a nudist community where everyone is naked, including the directors while filming. Nudists have never had a film made about them that cracks the surface of their nakedness, to go deeper into their lives. This film needs to reach a wider audience while also reaching nudist communities through grassroots screenings. We want to have naked screenings at upcoming festivals and reach nudist communities across the US, Europe, Asia and Latin America. We want to partner with distributors that are excited about this challenge, and who also want to push the boundaries on how we accept and view human bodies onscreen.