RODDY BOGAWA ON “TAKEN BY STORM” 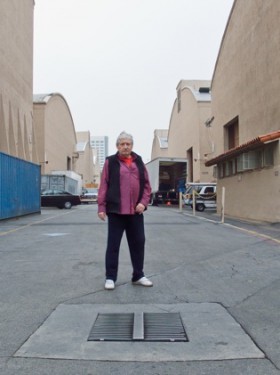 Excuse the inconsistent audio levels, a few bad edits, and the boom-y sound of some of this, but I decided to simply take the recording of my interview with Roddy Bogawa about his new doc, Taken by Storm, and run it as an audio podcast. I may try and do some more, and if they get smooth enough, start uploading them to iTunes.

Taken by Storm is a portrait of artist Storm Thorgerson, who is best known for his work with the graphic design company Hipnosis designing album covers for bands like Pink Floyd and Led Zeppelin. His sometimes surreal images, often the products of giant, theatrical photo shoots, are instantly recognizable as the covers of such albums as Dark Side of the Moon, Animals, Wish you Were Here, Houses of the Holy, and the solo albums of Peter Gabriel.

When I heard that Bogawa, whose own work includes experimental features like Some Divine Wind; the “lo-fi science-fiction film” Junk; and an autobiographical underground punk documentary, I Was Born, But, made a movie about the guy who did Pink Floyd’s album covers, I assumed, frankly, that it was a commercial job and that the film was intended to be a bonus item on some ’70s rock box set. Once I started watching the film, however, I knew otherwise. This isn’t your standard rock-and-roll hagiography. It’s an insightful and often moving portrait of an artist later in life, a man who has found a space for his visions within the world of commercial album cover design instead of the high-art market. But while Bogawa’s film contains interview material from Pink Floyd’s David Gilmour and Nick Mason, and Led Zeppelin’s Robert Plant, and plenty of footage of Thorgerson on location mounting his giant shoots, it also has thoughts and testimonials from art critics and fans like fellow artist Damian Hirst. And, in the film’s final notes, it muses on the relationship of art to music, what we lost when we went from twelve-inch album covers to tiny CD cases, and what will be nearly obliterated as package-less digital music reduces the role of graphic design even further.

I spoke to Bogawa for 20 minutes, and began by asking him what made him decide to do this project.