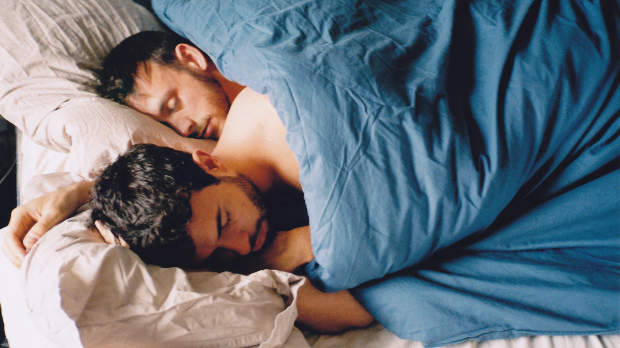 A wistful Friday to Sunday romance unfolds in British newcomer Andrew Haigh’s Weekend, a drama involving a pair of men who meet at a gay dance club and spend a poignant weekend together, one which will change them both forever.

Filmmaker: How did you first conceive of Weekend?

Haigh: I really just wanted to tell a story about two guys and the start of a possible relationship in all its insecure, messy, drunken glory. I wanted to tell it with honesty and authenticity while exploring some of the more subtle aspects of the gay experience. But this was never meant to be an issue-led film but rather a character-led one and watching the start of a relationship has always seemed to me a good way to understand a person. It is in those early stages of getting to know someone that you leak out all of the information that you feel defines you as a person, your past, your present, your ambitions for the future. You put across who you want to be as much as who you are. I wanted the film to be about this struggle to define yourself and the complications of trying to find your place in the world. Obviously this is especially pertinent if you are gay, but these are issues that affect everyone regardless of sexuality and I always hoped that this film would have resonance outside the obvious demographic.

Filmmaker: Who was most instrumental in getting the film financed and produced after you’d written it?

Haigh: It was my producer, Tristan Goligher. He took the reigns of the production early in the writing process and helped with script development as well as searching for the money — which of course was not easy. Gay themed films seem to make backers very uncomfortable. Luckily, we got some incredible support from a regional funding body in the UK called EM Media who never had such qualms and were fantastic throughout. Also it is worth saying that I think a good producer helps create a tone for a production and Tristan is a firm believer in this. It is very important that you find the right collaborators from the d.p. down to the runners and have an environment in which everyone is respected and treated properly. The personality of a film set is so important. If you can create the right atmosphere on set then I think this continues once the camera is turned on and ultimately ends up on screen. Plus people should enjoy making a film otherwise what is the point?

Haigh: Our theme for the film was ‘authenticity’ and this extended to how we approached the shooting and editing. We adopted a near documentary approach with each scene being one shot and with no coverage at all. It allowed the actors enormous freedom to try different things (and meant we could shoot the film within our schedule) but of course the effects of this approach are felt in editing. You have limited choice and limited ability to alter the pace within a scene. Also of course, the scene has to work in its entirety. Luckily the actors were so consistent that we rarely had problems and I think the style certainly adds to the feeling of realism in the film. Also of course, the dilemma of editing is what you decide to loose and what you decide to keep. Sometimes a scene can work beautifully by itself but less well when played in a sequence. You can’t be too precious when you are editing. You have to get out those scissors.

Haigh: I was in Soho in London buying a really overpriced sandwich and I was irritated that it had cost me so much –- that is when I got the call from my producer.  I was incredibly happy, so happy I forgot all about the sandwich. I have been influenced by a lot of films that have come out of the festival and when I was writing the project I had always hoped that it would be where the film would premiere – so it was really good news.

Haigh: It is so hard with a low budget film like this to get it out there to the audience. We have adopted all the usual channels of Facebook, Twitter and Tumblr and tried to get as many people interested in the film as we can and will continue to do so. The Film Collaborative are helping us with distribution and sales and we are really excited about that. They do not take the rights of your project and more of the money comes back to you than it would with a standard sales agent. It is great working with them because they really seem to understand the limitations we face in terms of distributing the film and the best way to get the film out there.

Haigh: I have two features I am trying to get off the ground. One is a very loose remake of a French New Wave classic that I am keen to make in the US and the second follows the collapse of a long-term marriage following the discovery of a long lost lover found perfectly preserved in the ice.