LIFE IS FUNNY, BUT NOT REALLY: FX’S LOUIE 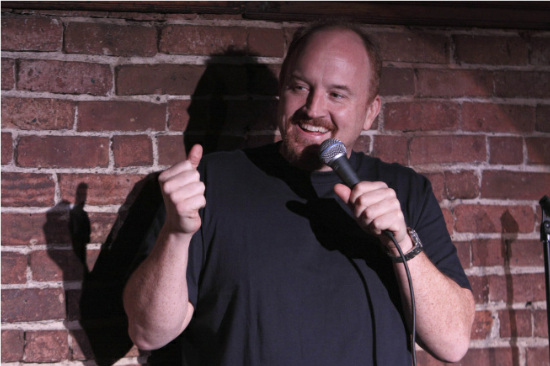 by Jane Schoenbrun
in Filmmaking
on Dec 5, 2011 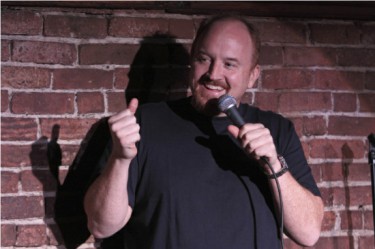 Welcome to part one of a series in which I’ll be highlighting some of 2011’s boldest, most inventive television. Each of the shows that I’ll be writing about are helping to redefine the artistic possibilities of television as a medium. And where better to start than with FX’s Louie, the most consistently surprising half-hour on TV.

Twenty years ago Seinfeld built a reputation on the claim that it was a “show about nothing.” Whereas other sitcoms of the era defined themselves through high-concept premises, outrageous characters, and cheap, saccharine “will-they-or-won’t-they” tactics, Seinfeld followed four unlikable, unremarkable friends through the tiresome travails of everyday life.

But despite this unromantic stance, the show was still, at heart, an NBC sitcom. Even when Jerry, George, Kramer, and Elaine spent 22 minutes waiting to be seated at a Chinese restaurant, or wandering through a parking lot looking for their car, the show didn’t exactly strive for realism. The exaggerated other-worldliness of situational comedy prevailed. Catchphrases were established. Double-entendre ran rampant. Laugh-track quotas were more than reached.

Louie, a half-hour comedy that wrapped its second season on FX this past September, doesn’t fall into any such patterns. Almost exclusively the brainchild of writer/director/editor/star Louis CK, the loosely autobiographical show presents the world through the eyes of CK, a depressive standup comedian and single-father attempting to raise two daughters in New York City. Louie shares Seinfeld’s “comedy about nothing” ambitions, and even its structure — just as in Seinfeld, episodes of Louie are book-ended by actual stand-up segments, filmed on location at West Village club The Comedy Cellar.

Where the two shows diverge is in the fact that Louie can in no way be mistaken for a sitcom. Really, it’d be a stretch to even call the show a comedy. Episodes are decidedly low-concept, jokes are few and far between, and conventional three-act structure is thrown to the wolves.  Instead, the show favors a boldly non-narrative format. Episodes amble along at a relaxed pace, with extended diversions set up to mimic the meandering ennui of everyday life. Unlike Seinfeld, the execution matches the ambition. 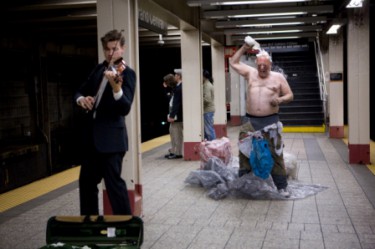 A scene from Louis' second season

Just watch the first seven minutes of second season episode “Subway/Pamela,” to see what I mean. The episode begins with Louis waiting for the subway. A violin player performs nearby, unaware that behind him a homeless man is in the process of undressing and bathing himself with a bottle of water. Later, Louis boards the train and notices some gnarly, indistinguishable brown liquid on an unoccupied seat in front of him. In response to this discovery, he fantasizes (in high-contrast black and white) about cleaning up the mess with his sweatshirt. And that’s it.  That’s literally the entire first act. When the show returns for act two, it’s with a different plotline, on a different day, with no reference to what came before.

CK, well respected on the standup circuit for several decades, has one previous television endeavor under his belt, the short-lived 2006 HBO series Life with Louie. But while that show fell into some more conventional sitcom trappings, CK has made a conscious effort to try something different with his sophomore effort. As part of his initial deal with FX, he agreed to take budget cuts in exchange for complete creative control. Each week, he delivers an episode to the network. Before that, they don’t see a thing.  Freed from the burden of network notes, CK has been able to leisurely explore some refreshingly experimental territory.

The second season, a clear improvement over the first, takes full advantage of this freedom. In “Country Drive,” Louis sits behind the wheel of his car, his daughters restless in the backseat. When The Who’s “Who Are You?” comes on the radio, Louis rocks out, using the steering wheel as a drum kit, singing in embarrassing falsetto, motioning for his preteen daughters, who look back with terrified confusion, to join in. Where most comedies would push through this gag quickly to get to a sassy one-liner from one of the kids about how unhip their dad is, CK lets the segment unravel over the song’s entire five-minute length. It’s uncomfortable, claustrophobic, and oddly realistic. A digression well worth the time spent (nearly a quarter of the episode.)

The show has also become adept at integrating surrealism into the mix. In “Moving,” an episode that finds Louis hunting for a new apartment, he at one point stares out a window and watches as two suited men abduct a bum off a street corner in broad daylight. The suited men then replace the bum with a nearly identical homeless man from the backseat of their car. Once the deed is done, they drive off. The show provides no explanation for this surreal diversion, just Louis’ trademark stare of bewildered confusion. 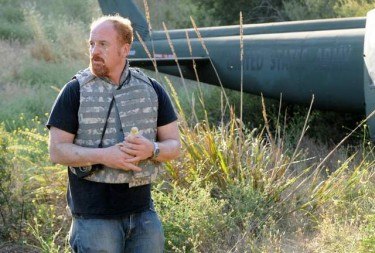 And then there’s “Duckling,” an hour-long episode dedicated to war photographer and Restrepo filmmaker Tim Hetherington, in which Louie flies to the Middle East for a series of USO shows. Also along for the tour are a patriotic country singer and a high-school cheerleader. While most shows would use this opportunity to mock some easy stereotypes, Louie instead focuses on fleshing both characters out. Under a makeshift tent, performing for a few dozen war-weary soldiers, the country singer proves a more fitting, compelling performer than Louis could ever hope to be in such a situation. Later, the camera lingers for several minutes on a start-up soccer game. As the tired, overworked troops kick the ball around the desert, Louis silently joins in. As this vérité scene draws on, there are no high stakes. No cutting one-liners. No dialogue even.

Louie is a collection of short stories. Viewers aren’t asked to tune in each week to follow a developing plotline, or to see just how many jokes can be rattled off. The draw is CK’s unique worldview, his increasingly precise, awed perspective on everything happening around him.  In “Eddie,” an especially gripping episode from late in the second season, Louis summarizes this perspective during an argument with an old acquaintance who has just admitted that he is contemplating suicide. Louis argues:

“Life isn’t something that you possess. It’s something you take part in. And you witness.”

This is the philosophy with which CK has started to build something quite remarkable. Like Seinfeld, he has created a show about a comedian. But the types of situations that Louie revels in, the strange people he crosses paths with week after week — CK is not trying to laugh at them. He’s trying to understand them.