Data Will Be the Death of Us

by Michael Murie
in Cinematography, Filmmaking
on Nov 4, 2011

The death of film, the evolution of technology, and the days of shrinking budgets have put into question the existence of the 2nd AC. Who needs someone to load and manage film when there is no film?

Ironically, the position may be more critical than ever. Whether you’re a sole cameraman, or working on a large production, managing the data coming from the camera remains critical, and is becoming more difficult. Increasing resolution and higher data rates mean that more disk space and more time is being taken up wrangling the data.

And if your capture media needs to be recycled during the shoot, you expose yourself to the risk of accidental data loss.

Having a Plan
The most vital part of the process is having a plan. Ideally, when data is copied from the card or solid-state recorder, a second copy should be made on a separate drive before the original source is erased. It’s also important that this process doesn’t happen while you’re under the gun. If you don’t have someone who has the time to manage copying data during the shoot, you should have enough storage to shoot for the entire day. That way copying the data can happen at the end of the day, when some of the pressure is off. Mistakes – and data loss – happen when you’re rushing to copy a card so that you can erase it and continue shooting.

Small flash cards, SD and Compact Flash, are easy to lose and confuse. Many people label them based on the camera (camera A, B, etc.), and store them in separate card holders that denote whether the card is blank or has been used. Even so, if your camera has the option for outputting to an external recorder, making two copies during recording (one to the card, one to an external recorder) decreases the chance that a mistake will lose everything. 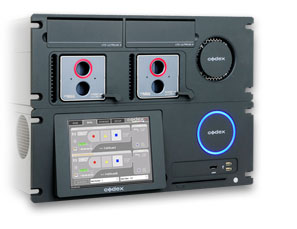 At the high-end, companies are recognizing the problem and offering solutions for on-set backup and data distribution. Codex Digital offers the Digital Lab, a device that digests the content and will spit out files in different formats that can be used by the editing department or for review by clients. These systems seem like the perfect solution, but as with all new technology, allow time to debug and test the process before going out on a shoot. Walter Murch recently spoke about completing a shoot with the Arri Alexa and the Codex Digital Lab, and though things eventually worked out, they had a lot of problems with the device at first: “Things are never as simple as they are supposed to be,” said Murch. “This required a lot of babysitting at the beginning. We learned a lot about the process.”

Plan, have redundant systems, and avoid erasing data under high-pressure situations. And remember that more data is lost due to human error than due to hardware failures.