A futuristic buddy film focused on the relationship between an elderly ex-jewel thief and his caretaker robot, Robot & Frank’s premise might sound high-concept, silly even. But director Jake Schreier ‘s focus is on keeping the  action emotionally grounded. Anchored by the dexterous, empathetic, and ever-dependable Frank Langella (Frost/Nixon, Superman Returns) as well as a strong ensemble that includes Susan Sarandon, James Marsden, and Liv Tyler, director Schreir’s feature debut is a small-scale character piece with some very large ambitions. 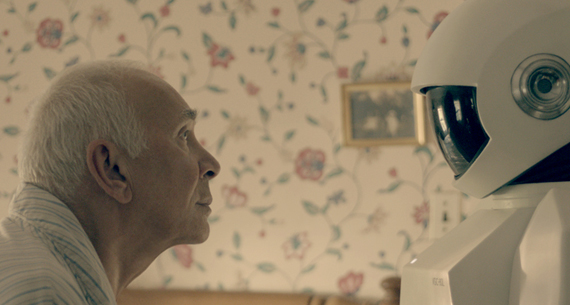 Filmmaker: Robot & Frank started out as a short film in 2003, so the feature version has obviously been gestating for quite awhile. How did the project develop and what changed over the years?

Schreier: Robot & Frank was a short film that Christopher Ford wrote and directed when we were at NYU. I helped produce it for him. A few years ago, when he and I were trying to think of ideas that would make for a feature that was achievable but also had a hook, we returned to it and decided to develop it into a full-length. It took a lot of hard work on Ford’s part to flesh it out and expand the idea, the heist element was a new addition, and most of the family relationships are new as well. So it’s not as though we’ve been working on it since college, but it’s nice to think back on the core concepts that remain from the short.

Filmmaker: You were able to attract some very high profile acting talent, especially considering this is your feature debut. Can you talk a bit about the casting process?

Schreier: Our cast was incredible, not only in stature, but also in their commitment to taking on what must have seemed like quite an odd project with a first-time director. One of my producers, Galt Niederhoffer, has a long track record of getting great talent in indie films, and it’s really to her credit that we were able to attract this kind of cast. It can’t have hurt that Ford wrote such an alluring screenplay.

I think probably the most fun part of the process was getting to meet each actor and hearing their take on the script. There comes a point when you’re trying to get the mechanics of the whole story to work, but an actor is reading it from the perspective of their character. So with each person that came on board we got excellent feedback that helped us keep each role feeling true.

Filmmaker: Was it tough to coach Frank Langella through acting opposite such an atypical costar?

Schreier: Frank Langella certainly doesn’t need any coaching from me. Watching him act every day was an absolute treat. I suppose it’s possible that some actors might have had trouble working against a robot, but to some degree all those ideas are built into the script. We purposefully designed the robot to be faceless, so that it could appear either creepy or cute, depending on what point we were at in the film. Any discomfort Frank might have felt could only help that early awkward part of their relationship. Getting the emotional connection that develops to feel honest is probably a lot harder, and something that very few other actors could pull off. If audiences feel we achieved it, they can thank Frank, not me

Filmmaker: The film really tows the line between numerous genres (drama, comedy, sci-fi). What kind of audience do you hope it attracts?

Schreier: My friend Francis (of the band Francis and the Lights, who also composed our score) has a philosophy of trying very hard to not consider the audience, but rather to consider what he himself would think of the work if he were in the position of an audience member. “An audience of me’s,” he used to say. I’ve always liked that way of looking at things. I just tried to make a movie that I felt I would enjoy. I tend to have relatively mainstream tastes, so hopefully that means there are enough other people that will enjoy it too.

I agree it’s probably hard to pin down the genre of the film, but I like that because it makes it much harder to see where it’s headed. If you take a step back once you’ve seen the movie, the structure is actually relatively conventional, but the details are not.

Filmmaker: Are there specific science fiction films or filmmakers who you feel this movie is especially indebted to?

Schreier: I hope I’m not getting myself in trouble here, but I’ve actually never really looked at this as a science fiction film. That isn’t to say you can’t call it that, but once you get beyond the conceit of the Robot, it’s far more concerned with telling a story about characters than with making observations about the future. Or maybe I’m just more focused on that side of it because the sci-fi details came earlier and since then I’ve just been trying to make the emotional arcs work. As silly as it sounds, we probably owe more to Ronin than anything else, since I had absolutely no idea how to do a ‘glass-catch’ and Matt Lloyd, my cinematographer, had the wherewithal to remember the one between Robert De Niro and Stellan Skarsgaard. We downloaded it off iTunes the night before we filmed that scene and copied it almost shot for shot.