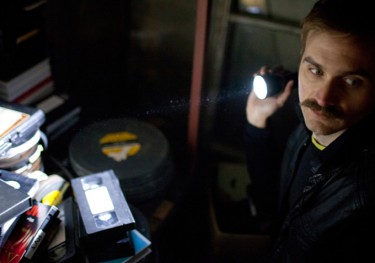 “When we started Bloody Disgusting back in 2002, we were the only ones doing it daily,” says Bradley Miska about the origins of his all-horror site. Sites like Ain’t It Cool News, Dark Horizons and Jo Blo were around too, but as its name would suggest, Bloody Disgusting hammered a wooden stake in the burgeoning field of online horror coverage and now, 10 years later, it is reaping the rewards. Management company The Collective “bought into” Bloody Disgusting five years ago, says Miska, and today the co-owned website is just one part of a gory mini-empire that also includes a releasing label, Bloody Disgusting Selects; a TV series, Black Friday, on the new YouTube channel Black Box TV; and, here at Sundance, a film, V/H/S.

Remembering the site’s origins, Miska says, “It was when horror was starting to come back strong after the ‘90s Scream thing. Jeepers Creepers, Cabin Fever, The Ring — all those movies catapulted horror back into the spotlight. And while everyone always complains that it’s been ‘a bad year for horror,’ it’s been remarkably consistent. Each year there are a few films that move the genre along.”

But what has changed a lot in the last decade, says Miska, is less horror itself than the coverage of horror on the ‘net. “Now non-genre sites cover horror regularly. We have lots of competition. And publicists understand the power of the internet. They’ll send press releases at 6:00 PM on a Friday night because, you know, none of us sleep. So the site takes up a lot more time. I used to work two hours a day. Now it’s 24/7.” Along with Miska and co-founder Tom Owen, out of Chicago, Bloody Disgusting has one other major staffer and a dozen or so freelance contributors.

V/H/S had its origins when Miska had a conversation one day with The Collective. “We were talking about different ways of expanding the brand, and I wanted to do a TV series,” he says. “And then it evolved into an experimental film project.”

V/H/S is a horror anthology film — “video horror segments” is one of the title’s meanings — based on the idea of a collector who hires a group of kids to break into a house and retrieve a specific VHS tape hidden there. Of course, they find many tapes, and some of what’s on them appears in this film.

“The film it most closely resembles is The Signal, in that it is streamlined and singular in a sense, but there are different stories within it,” says Miska. Of the production, he continues, “We did it in reverse — we did the wraparound first.” With the bridging segments already shot by Adam Wingard and [writer and segment producer] Simon Barrett, “we went to other directors [David Bruckner, Glenn McQuaid, Radio Silence, Nicholas Tecosky and Ti West] we had relationships and asked them if they’d like to shoot 20 minutes of footage. The directors came back to us with treatments and pitched their ideas. Then each director did his own thing, and eventually we stepped back and assembled the movie. The only thing we got heavily involved with was time. It originally ended up being over two hours long, and we had to work with the filmmakers to whittle it down. In the end, it’s a weird, experimental project — a leap-of-faith film — that came together shockingly well.”

Given its title, was any of the film shot on VHS? “I don’t think any of them were shot on VHS,” admits Miska. “But every segment has a different look or quality. Some of them were shot on HD, projected, and then recorded again off the screen. And a lot of the footage was sourced from analog. There’s a bit more of a backstory to all of this, but it’s part of the story that I can’t reveal.”

While Bloody Disgusting has been involved with the distribution of films like The Woman and Rambok, Miska says that VHS will be an acquisitions title in Park City. “Having seen the movie, I think this will be the next ‘found footage’ craze. I’ve been running this site for 11 years, and I think we might have the next Paranormal Activity or Devil Inside.” And while the film has competition at Sundance, Miska is looking at these other titles from his journalist/fan perspective. “I’m really looking forward to seeing John Dies at the End,” he says, “and Red Lights looks incredible. I’m also pretty excited to see Excision and The Pact, and Grabbers looks cool.”

Mostly, though, Miska says he’s just proud to be at the festival with the film. “All of the directors are people who the site respects a lot and trusts a lot, and I hope it changes the perception of how you make a movie. It’s what I like to call ‘living filmmaking.’ Instead of going with a structured plan, you go with the flow and see what’s working and what inot. That’s the beauty of independent film. We made this movie for us. We made what we thought was cool. Not like the studios.”