JOHN COOPER ANNOUNCED AS DIRECTOR OF THE SUNDANCE FILM FESTIVAL 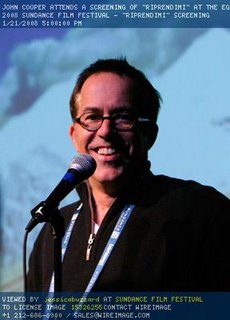 Tonight the Sundance Institute announced the appointment of John Cooper as the new director of the Sundance Film Festival. Cooper has been with Sundance for 20 years and now, following Geoff Gilmore’s departure to Tribeca Enterprises, steps into the leadership position. When Holly Willis interviewed him for this magazine three years ago she wrote, “Funny, self-deprecating and entirely approachable, Cooper is known to thousands of American filmmakers as the guy who calls with really excellent news. For the festival, he’s integral, the armature that supports everything.” We congratulate Cooper on the appointment and look forward to talking with him in the weeks ahead about his plans for the festival.

Highly respected by the film community and known for his innovative style, Mr. Cooper joined Sundance Institute in 1989 and has played a pivotal role in both the evolution of Sundance Film Festival and the development of the Sundance Institute’s new initiatives. Long committed to diversity and building audiences for independent film, he has pioneered the Institute’s expansion of cinematic storytelling by fostering the development of New Frontier on Main, the intersection of contemporary artists with technology and the moving image; boosted the Festival’s now content-rich website, enabling a virtual Festival experience for film lovers all over the world; and led the distribution of short films through strategic relationships with iTunes, Netflix and Xbox 360 platforms. Last year Mr. Cooper was instrumental in engaging Blue State Digital, architects of President Obama’s groundbreaking online campaign, to connect with the Institute’s film and theater alumni, enhancing donor communication, and the recruitment of new Institute and Festival supporters. In addition to programming the popular Sundance Institute at BAM series, since 2005 Mr. Cooper has spearheaded The Sundance Institute Art House Project, a national initiative of 18 art houses from across the country designed to connect regional audiences to the Sundance’s films and filmmakers.

Robert Redford, Sundance Institute President and Founder said, “When we established the Festival, it was always with two goals in mind: supporting new artists and inspiring new audiences. Cooper has never lost sight of these goals. He brings to the position an infectious enthusiasm as well as a deep understanding of the Sundance brand and culture. Forward thinking, he is a natural choice of succession to lead the Festival into the 21st century.”

Added Ken Brecher, Executive Director of the Sundance Institute, “The Trustees and I are very pleased that Cooper has agreed to serve as the Festival’s new director. To have such an innovative leader who is very much in tune with the needs and interests of today’s filmmakers is invaluable.”

“This is a tremendous opportunity not just for me but for the entire programming team,” Mr. Cooper said. “Our industry is at a crossroads: innovative technology and global accessibility are making filmmaking wildly creative while, at the same time, traditional funding and distribution models are being challenged. Never has our Festival been more relevant. I am honored to accept this position and ready to get to work on shaping the Festival of the future.”