by Scott Macaulay
in Distribution, Filmmaking, Interviews
on Mar 9, 2012

“Tipping.” “Pulling.” “Gathring.” Yes, a new tech start-up has entered the independent film space, and with it a nomenclature that speaks to its ambition to “democratize” the business of theatrical distribution. Launched by a filmmaker, Scott Glosserman (Behind the Mask), Gathr offers “TOD,” or theatrical-on-demand, an audience-driven process by which fans request (or “pull”) films to local venues by aggregating their interest and pledging their funds in advance via credit card. When enough fans support a screening on a particular day, the film “tips,” and credit cards are charged. Fans get to see films that might never come to their towns, and theaters get a guaranteed audience for a low-traffic night.

Positioning itself both as a resource for DIY filmmakers and a sub-distributor for established players in the theatrical space, Gathr launched this week with titles ranging from indies (Behind the Mask, Truth in Numbers) to repertory (Alien, Blazing Saddles) to second-run arthouse (Fox Searchlight titles Another Earth, Martha Marcy May Marlene, Shame). (Tugg is another player in this space.) I spoke to Glosserman about Gathr’s business model, its predecessors, and all that tipping, pulling and gathring.

Filmmaker: So how do you describe Gathr?

Glosserman: We have coined a new term: TOD, or theatrical-on-demand. We allow people to pull movies to places those movies wouldn’t have a prayer of screening. We’re creating theatrical distribution from the bottom up and democratizing [this part of the business.] I like to say it’s kind of like Kickstarter met Netflix and had a love child. We are consolidating and creating critical masses online, who preauthorize their credit cards for the cost of the ticket, promote the film and gather around the endeavor to screen the movie. When we achieve our internal thresholds and tip, that’s when we charge credit cards. We don’t have to be a traditional distributor who needs a home run to cover our losses. We can outlay our costs and then react when people tip the movie.

This becomes a wonderful opportunity for exhibitors, especially arthouse theaters, who are outlaying risk whenever they book an event. Exhibitors can tell us what nights they are dark, and when they would gladly receive a critical mass of an audience. Gathr gives local exhibitors an opportunity to gather screenings of alternative content and see what sticks. They can reach out to their community in a proactive way. And we give both distributors and content owners a found revenue stream. Filmmakers now have Gathr as a tool to marry films with audiences. Filmmakers can install a custom Facebook tab that drives people who want to see a movie to its page on Gather.

Filmmaker: How are you planning to work with existing distributors?

Glosserman: Both content owners and distributors can tell us where they are distributing a film and where they are not. We can then take on secondary and tertiary markets. Say a small distributor opens New York, Los Angeles and a few other cities. We can augment that by telling our theaters they can stream the movie day-and-date if they gather an audience. All of a sudden it makes Augusta, Maine and Santa Barbara, California relevant.

Filmmaker: I believe you attended the Sundance Arthouse Convergence, where you met many small exhibitors. What did you take away from that event?

Glosserman: We attended the Sundance Arthouse Convergence to meet as many delegates as we could and to learn what their needs are. Right now we are in the most tumultuous year for indie theater owners. And a time when theater owners have to retrofit for digital, many of them are looking for cost effective, risk-free ways [to increase revenue], and Gathr is coming at the exact right moment.

Filmmaker: Others have explored this space before. I’m thinking of OpenIndie, which also allows audience members to request theatrical screenings of independent films. I’m sure there have been even more who have experimented with this model as well. What’s different about your approach?

Glosserman: Those guys were trailblazers. There’s also the Paranormal Activity method that Paramount played with, and Eventful did some of this with their “demand it” button. Lots of people have tried to do it. So yes, the components of this have been known as business methods in this industry. But all put together it is somewhat new. The missing link has to with the conversion ratio. You look at a retail website, like Target, and typically that’s under 5%. So, when a company is aggregating interest and relaying that info to a booker, the booker has no idea whether those people will actually put their money down. By pre-charging credit cards when a movie tips, we guarantee the theater an audience. And also, technology has caught up and allowed us a cost-effective way to market online using targeted keywords and social communities. That lets content owners get to their fans.

With our technology, [we can ask], are there 50 people in every town of 25,000 who would see the movie one time in a theater? And those numbers can then add up. That becomes a real, no-kidding, ancillary-revenue stream. There are 343 towns in this country of 100,000 people or more. Margin Call, at its height, was playing on only 155 screens. 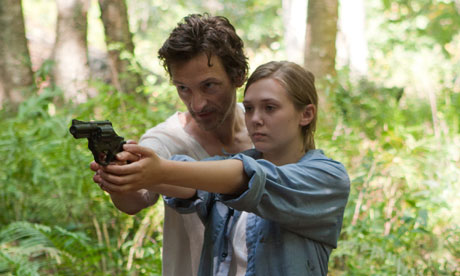 Filmmaker:With so many independent films going day-and-date right now, premiering simultaneously on VOD and in theaters (or even pre-premiering on VOD), why wouldn’t audiences rather watch a film instantly than request it without knowing if their request will ultimately be granted?

Glosserman: I will submit to you that our competition is not VOD. There are people who will watch a film on VOD and that’s fine, but we’re looking at everybody in the theatrical space. At the end of the day, people want to see a wide variety of movies in a theater and with a crowd. The VOD audience is not the pool from which I’m drawing. Look at the exponential growth of film festivals in the last decade. If you take a non-buyers fest like Cleveland, they’ve grown over 200 percent in last ten years. They are now running 80,000 people through an 11-day event. There are still tons of people who are not serviced by Hollywood and who are clamoring to see a wide variety of films in a crowd. I use film festivals as my outlier. Someone much smarter than me, Dan Feldman from Warner Brothers, said something that he probably lifted from someone earlier than him. He said, “Everybody has a kitchen, but it’s impossible to get a restaurant reservation on a Friday night.” If we continue to create events around movies, people will go.

Filmmaker: Okay, so say someone makes plans for a hot date on a Friday night and decides to use Gathr to request a film. When will that person know that their movie date is confirmed, and that they won’t just be spending the evening at Applebee’s?

Glosserman: Every theater will be different. Calendar houses plan far in advance, while forward-thinking chains like the Alamo can react quickly. We find out from the theaters what their situations are. Do they list in newspapers, so there will need to be more lead time, or are they just changing their schedules online? We can deliver content to movie theaters in only one or two days, whether it’s via DCP or Blu Ray or 35mm print. But, [a successful “gather”] will typically average at least four or five days advance notice. A movie will need to tip about a week ahead of time. We hope that’s enough time for most people to react and make plans if a movie doesn’t tip. One-night-only and special events we hope will sell out as quickly as a concert will sell out. For events like these, that opportunity can be presented months in advance.

Glosserman: It’s a simple formula with transparent accounting and reporting. Fixed delivery costs come off the top, then we pay theaters a percentage of the gross — with an MG that’s against that gross. What is left over we split with our content owners. Everybody is playing the upside. And we are building in a mechanism to not even tip unless everyone is in the black.

Filmmaker: And what about delivery materials? What do filmmakers have to give you?

Glosserman: We require materials as any distributor would, although we have simpler delivery requirements. We want trailers and artwork on a hard drive, and we want a master of the movie that we can make copies from. We can serve any format; we are format agnostic. But [striking] a 35mm print may take 500 people and not 25. Technicolor is our lab partner.

Filmmaker: How do filmmakers get their films onto Gathr?

Glosserman: Down the road we will have a turn key process, like Without a Box. DIY filmmakers will be able to upload their content. In order to not be inundated right now, and to work out our kinks, people can’t upload to the website yet. But we are actively looking for films, and anyone can call us.

Glosserman: I have been meeting with a lot of indie filmmakers who are mired in no-good situations. A lot of these filmmakers are really anxious to give Gathr a shot and see if it works. Or, they’d love it if their current distribution partners would find a way to reach the rest of the country. I hope that in the future when people sell their film to Fox Searchlight, they’ll ask, “What is your TOD strategy?” We hope it will be unfathomable to not have companies distribute to the secondary and tertiary markets. We’re creating not just company but a whole new sector.