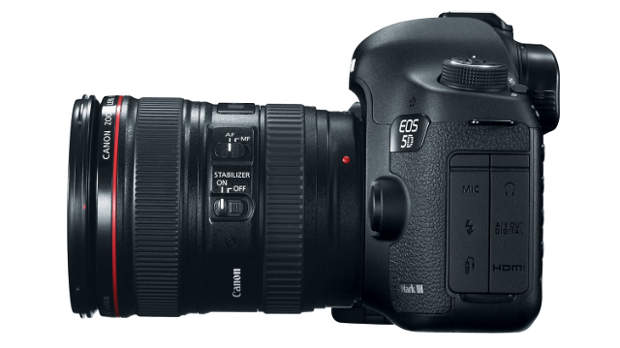 by Michael Murie
in Cinematography, Filmmaking
on Mar 8, 2012

Last week Canon announced the 5D Mark III, and not surprisingly, it’s evolutionary rather than revolutionary. To recap, the 5D Mark II practically created the DSLR video revolution when it was announced in late 2008. Since then Canon has released a number of other DSLRs that rival the Mark II – several at lover prices – but none that set the bar higher or so captured the imagination of video and movie makers.

Still, the video world has continued to evolve, and the past year has seen the arrival of several large-sensor cameras that more closely resemble traditional video cameras; notably the Panasonic AG-AF100 and the Sony NEX-FS100 and PMW-F3. Canon themselves just got in on the act with their own $16,000 C300.

If you’ve been following the internet for the last year, it’s been these cameras that have garnered the most attention, while new DSLRs have received very little. This may be partly because while cameras like the Canon 60D added features like a swing-out LCD, the image quality wasn’t markedly improved, and the operational functionality wasn’t drastically changed. 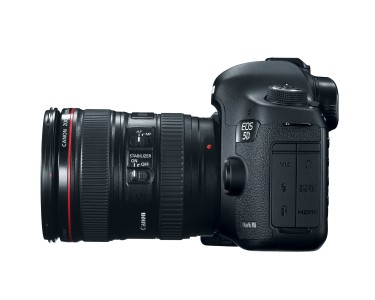 Canon has now come out with a new camera that sets the bar higher than the original. Is it enough to win back the attentions of the video shooter, or will this NAB be all about the C300 and its ilk? Only time will tell; for the moment, we’re still digesting what the 5D Mark III actually offers, and it does offer many new features compared to the original: the body is more rugged and water resistant, there’s in-camera lens correction, controls have been moved and re-thought, and for still photographers there’s improved auto-focus, metering and even an HDR mode. For good measure, they didn’t change batteries; it uses the same ones as the Mark II!

But for the videographers, the most significant changes are:

New Sensor
Interestingly, the new sensor is only slightly larger than the 5D Mark II’s. Still images go from 5616 x 3744 on the Mark II, to 5760 x 3840, a barely noticeable change. But that size is now three times the resolution of 1080p (1920×1080 = 5760×3240) This fact, and the new DIGIC 5+ processor, are probably responsible for the promised reduction in moiré and aliasing. The camera also – reportedly – reduces rolling shutter by half compared to the previous model.

Expanded ISO performance
In video mode, ISO is expanded to 25,600. Perhaps even more importantly, noise has been noticeably reduced (at least in the examples that have been posted!)

Memory
The 5D Mark II had a single CompactFlash card slot; the 5D Mark III has dual memory slots that accept both Compact Flash and SD/SDHC/SDXC cards. Three recording modes are available: you can save two copies of the video to separate cards, save different formats of the video to the two cards or relay record; switching from one to the other in the middle of recording.

The 4GB recording limit (which translated to about 12 minutes in HD) has been removed; the Mark III still records files to a maximum size of 4GB, but will seamlessly start recording to another file when it reaches that limit.

However, the 30 minute limit – which also exists in the 5D Mark II when recording in SD mode – still exits.

Audio
Support for audio recording has always been a limitation with DSLRs, but the Mark III makes some notable improvements; particularly a headphone port. Now you can truly monitor what’s being recorded; vital if you want to be sure that something is being recorded! There’s also on-screen audio meters, and you can use a touch pad to adjust levels during recording.

Timecode
For those shooting multi-camera work, support for SMPTE compliant timecode will be of interest, with the following options: Count up, Start time setting, Movie Record Count, Movie Play Count and Drop frame.

RAW video out: or other very high quality video options. Given that the C300 didn’t provide any of these options, this shouldn’t be a surprise. We didn’t get C-Log either.

Similarly, the Mark II’s Live View HDMI output switched to 480p during video recording, and many people were hoping for HD output in the III. The Mark III does get 720p output, but it’s not “clean” – you can’t turn off the overlays – so you can’t use it to output a signal to an external recorder.

Price: Most people probably thought the 5D Mark III would replace the Mark II and be priced the same, but Canon have boosted the price of the III by $1,000, and have said that – for the moment – the Mark II will remain on sale.

But one last thiing: The really large sensor
It’s important to remember that there’s one thing the Mark III has that none of the large-sensor video cameras have; that full-size 35mm chip; The C300 and the Sony’s all use Super35 (similar to APS-C) sized chips. Is the larger chip a good thing? It makes your lenses wider and your depth of field shallower. Some people like that – others think it can be too extreme – but it’s one difference the Mark III will continue to have over most of the competition.