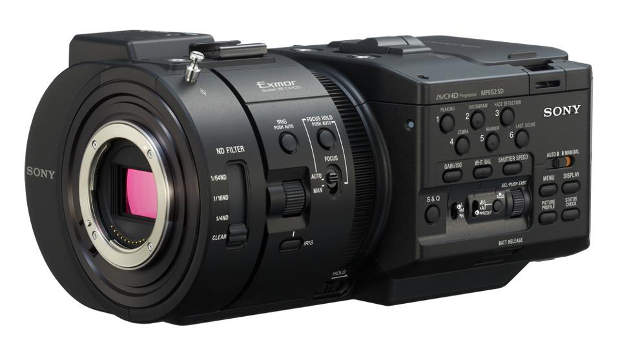 by Michael Murie
in Cinematography, Filmmaking
on Apr 3, 2012

Just when you’d think speculation about NAB releases would be starting to appear, Sony goes and ruins the surprise by pre-announcing a camera two weeks before the show!

The NEX-FS700 is the big brother of the NEX-FS100, and it appears that Sony intends to continue selling the FS100, with the FS700 “fitting in” between the $5k FS100 and the $14k PMW-F3. The FS700 resembles the body of the FS100, but the barrel that the lens is attached to is much larger, and adds a hump on the side to accommodate ND filters. It continues to support Sony’s E-mount.

Built-in ND Filters
When the FS100 was released, a lot of people were disappointed that it didn’t include built-in ND filters. If you’re shooting with a large-sensor camera, you are probably looking to get shallow-depth of field – something that’s hard to do in daylight with these comparatively sensitive cameras. Slapping ND filters in-front of the lens is one way to solve the problem, but that requires either a matte-box, or constantly screwing on – and adjusting – extra ND filters in front of the lens.

At the time, Sony said that there wasn’t enough room to put in ND filters; though it wasn’t clear whether that was because the body itself didn’t have enough space, or because the relatively short flange-depth of the E-mount on the camera made it difficult to put in ND filters. Whatever the reason – and it appears to be the former – Sony has now come back with a solution including ND filtration.

4K Support
The sensor in the FS100 is about 3MP, but the sensor in the FS700 is 11MP. Sony also says the camera will have 4K support – with a future firmware update. It’s unclear if this upgrade will cost extra, though it will undoubtedly require additional hardware that will probably be very expensive.

High-Frame Rates
One other new feature the FS700 offers; 200/240fps at 1080p, and 400fps at a reduced bit rate, though you are limited to about 12 seconds of recording time. If the quality of this function is reasonable, this will be a big differentiation from Canon’s C300.

HD-SDI
Lots of pros don’t care for HDMI because of the relative fragility of HDMI cables and ports, so the addition of HD-SDI connectors will be appreciated by many. 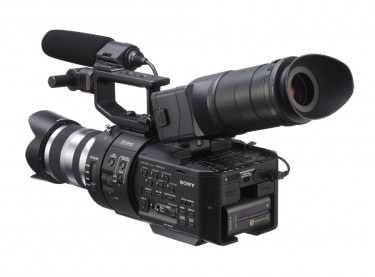 What about the image and the cost?
Of course, what we don’t really know is; how good is the image, and what will it all cost? The 4K option – even if it’s just the extra recording hardware – could be quite expensive.

The FS100 is regarded as a pretty good camera, the lack of ND filters not withstanding. While the image quality is very good, some users have complained that it suffers from color fringing problems when part of the image is over-exposed (the Canon C300 suffers from a similar problem, though not quite as badly.)

The FS100 uses the same sensor as the PMW-F3, but it doesn’t have the same processing or the same output options, meaning that the image wasn’t quite as good as the PMW-F3. Will the FS700 vault past the PMW-F3 at HD resolutions, or will it be similar to the FS100?

One last thing
With the NEX-FS line now “4K ready” how soon until the PMW-F3 has a big brother?

Den Lennie got to spend the weekend with a pre-release camera: Sony NEX FS700 on Location