Copy That: On the Transformative Effects of Independent Film Production

by Filmmaker Staff
in Directing, Filmmaking
on Apr 26, 2012

You don’t have to be British royalty to find a cure for a speech impediment through film. High school senior Daniel Altman wrote the below account of his work on an independent feature as his college essay. It was subsequently published on the Stuttering Foundation website, where it has attracted thousands of hits, and Altman has been accepted at his top choice school for the Fall. We’re reprinting it, with permission, because it’s a great reminder that the practice of filmmaking brings many rewards, many of which often go unsung. — Editors 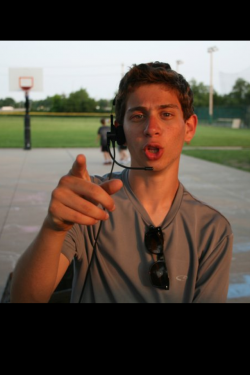 I stutter. I stutter like Porky Pig. Sometimes I stutter in short bursts – unrecognizable to any language – leaving me gasping for breath. Other times I stutter myself into silence. Standing with my mouth wide open like a possessed vulture, I try in vain to conjure sound. I’ve stuttered for as long as I can remember. My parents tell me it began at the age of two when one morning I woke up and couldn’t speak. From that day on I have experienced challenges in day-to-day life: ordering food in restaurants, making phone calls, or talking in class. I’m told stuttering is a mysterious and powerful force that blocks the path from brain to mouth. Muscles simply freeze, and potential words are left in the brain, sitting in a stuffy waiting room until they are ushered to the mouth to form words. For most of my life, I haven’t let stuttering define me. Still, I have recurring nightmares of a future work situation, talking on a phone struggling to speak to a boss or co-worker. My greatest fear is not what others think of me because of my disability but the limitations in life that are a result of stuttering.

This summer I had the opportunity to work on a full-length independent film being shot in Louisville. I have a passion for film production and would love to pursue it as a career. I interviewed and got a job as a Production Assistant. Here was a chance to work alongside big shots. Other Production Assistants who had already graduated from college and were trying to break into the business seemed puzzled by my presence on set. The movie included actors from shows like Cougar Town and Weeds. I couldn’t let my speech get in the way of this opportunity. Time to tame Porky Pig.

On the first day of shooting, I was handed a walkie-talkie. The little black voice box was everything I had always feared and more. This was a device that projected your voice to a network of people with high stress levels and volatile tempers.

The movie was a real life test of my ability to do what everyone around me takes for granted: the ability to speak. My failure to participate in essential set communication – a fury of fast talking jargon – would mean my immediate dismissal from the job. Another intern had been fired for a miniscule costume infraction. Working on a movie set meant working 18-hour days and complying with every order barked into the walkie-talkie during that grueling expanse of time. More importantly it meant dealing with everything that happens on a movie set uninvolved with filmmaking: actor transport, set maintenance and the hugely important task of tending to the all mighty crafts and services. So when that long dreaded moment came, when I heard my name in the headset, I felt my heart drop. Suddenly, a strange sensation overwhelmed me. A kind of dismal calm dominated my system. Wide-eyed and filled with the potent combination of fear and somber understanding, I raised the Walkie to my mouth and somehow clearly stated, “Sorry, no more assorted danishes at Crafts and Services.”

The next month was filled with night-long shoots and lots of walkie-talkie dialogue. My nightmares about failure in the workplace gave way to long talks on cell phones with good friends, perfect strangers, bosses or co-workers. Nothing was better than this, not even speeches in front of thousands, no, millions of people; to have the ability to communicate without hand gestures or someone else finishing my sentences. Now if someone asked me to escort the talent from hair-makeup-and wardrobe up to set, my response would be a steady and fluent: “Copy That.”