The Solar Odyssey: Shooting with the Sony NEX-FS100, Part Two

by Michael Murie
in Cinematography, Filmmaking
on Jul 17, 2012

Todd Mahoney recently spent ten days shooting a documentary project using the Sony NEX-FS100. It was his first experience with the camera. He was documenting the pre-voyage progress of the Solar Odyssey Project, the voyage of a solar powered boat that will be traveling The Great Loop. You can read more about that in the first half of this series [“THE SOLAR ODYSSEY”: TAKING PART IN A DOCUMENTARY, PART ONE]

In this interview, conducted after he had returned, Todd talks about his experiences shooting with the Sony NEX-FS100, the Sony NEX-7 and a GoPro Hero.

So what happened?
The boat did not launch while I was there, but I did have a great opportunity to shoot with the FS100. Most of the time I was shooting during the day. One evening, during a monsoon, I did do some night shooting with it as well. It did extremely well in low light. It picked up detail that I couldn’t even see with my naked eye. It was phenomenal in low light. 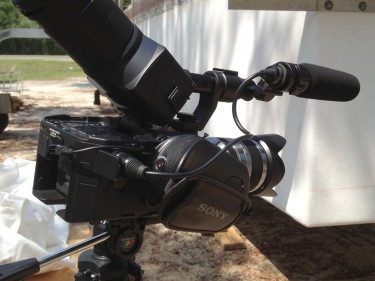 What were the challenges you had to deal with?
During the day, we were shooting on a white boat in a sunny situation; it needed an ND filter. We went out and purchased a variable ND filter, and put that on the camera. The trick with that is, if it’s on a shoulder rig you have to reach up and you can’t quite see the settings, and there are no stops on it, there’s no clicking. So you’re looking at the screen going, “I think that’s right.” Reviewing the footage you find out that if you use too much, it goes blue on you and it’s totally unusable. So it doesn’t need a lot of ND, just a very little in the low end and then it worked well.

What did you like about the camera?
The auto settings on it were phenomenal, pretty spot on. It’s a really great camera for low-light situations. Being in the boat I was able to shoot into the hull, which had no lights, just with the sunlight coming behind me and picked up some of the details inside. It’s just phenomenal.

You were using the kit lens?
Yes. The only problem with the kit lens is if you are trying to do a zoom pull, it’s very tight. It’s not smooth enough; that was the only downside of the lens. I think that with the FS700, when they make a lens for the rocker, that will solve that.

What else were you shooting with?
I also shot with the Sony NEX-7. That was really good. It picked up well in low light. We used it for a lot of candid shots like a shopping scene that we did. We walked around shooting video in Walmart, using the stock lens. We did some stills with it as well.I also used a GoPro as well, and an iPhone I used for an in-car shot. The GoPro I used to interview Philip Hodgetts for his daily narrative.

Why did you use the GoPro for the interview?
Because it was done while driving. We used the GoPro stuck to the windshield, aimed at him on a wide shot, and he was mic’ed up with an external mic because the GoPro onboard audio is horrible.

What audio gear were you using with the FS100?
We weren’t really using that audio. We were just using it for the image and putting in his narrative after that.

You enjoyed the trip?
It was a joy, a lot of fun and something different to do. As a person working in this industry you always want something different, and every situation was a challenge. The bright sunlight, monsoon rainstorms; you had to keep asking yourself, “How am I going to deal with this?”

And how did you cover the camera?
We had a rain slicker for it by Porta-Brace.

How’d that work out?
Once I figured out how to get it on, it was great. It came with no instructions, but it worked well.

Any other tips about the FS100?
It’s light, which is really great for rigging it, you can rig it basically any way you want. I used a monopod and a shoulder-rig, right now they are using it on a Cowboy shoulder-brace.

Were you using just the regular LCD?
Yes. I had an external one too, but I wanted to run and gun and I didn’t want the extra stuff hanging off the camera.

How did you find the focusing?
Focusing on the camera was really good. I’ve read reviews about the focus not being good. It really worked well. What’s nice about the camera is it can do an outline of what’s in focus, I used that and [could also use expanded focus] and see what was in focus and it was always great to do that.
You can do narrative shallow depth of field with it as well, but for this project I was told to avoid narrow depth of field; ‘we don’t want artsy, we want good content.’

What else did they tell you?
That was about it.

Anything else stand out about the experience?
One of the things that stands out for me was when I was doing some interviews with the captain, Jim Greer. I tend to set the camera up and stand off to the side of it, and I got some very candid moments with him, because he didn’t think I was rolling at that point. So he [talked about] what he was thinking and it was really good. You can get some really good stuff that way.

You can learn more about The Solar Odyssey Project at their website www.solarodyssey.com.

POSTSCRIPT: Just before this article was published, Todd got word there was another opening on The Solar Odyssey, and the week of July 16 he will be heading out for the 2+ month journey from Clear Water FL to NY City. His role this time will be Production assistant to Phillip Hodgetts. You can follow him on Twitter. 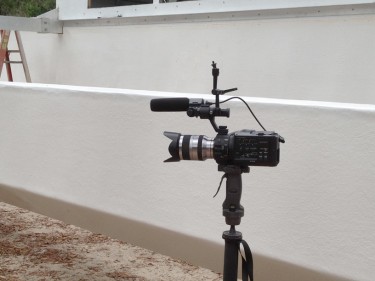