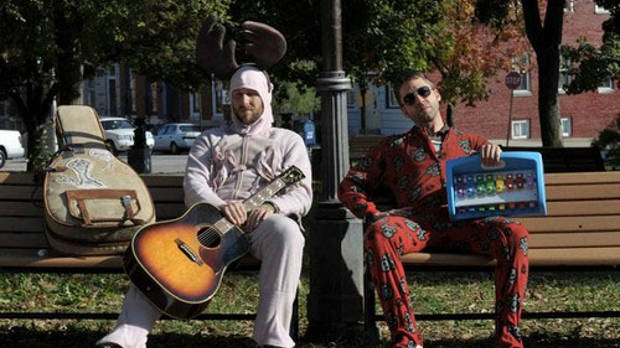 by Jim Allen
in Actors, Directors, Filmmaking, Interviews
on Sep 18, 2012

No one can say actor/musician Ryan O’Nan didn’t pull his weight in his directorial debut, Brooklyn Brothers Beat The Best, which makes its theatrical debut on September 21 via Oscilloscope Laboratories. Besides directing, writing, and starring in the film, O’Nan wrote and sang most of the songs on the soundtrack (album out 9/18 on ATCO Records). A 2011 IFP Narrative Labs project that premiered at Toronto last year, Brooklyn Brothers is the story of two ne’er-do-well musicians who make an unlikely alliance, embarking on the kind of quixotic journey that’s tailor-made for a buddy movie. But O’Nan’s film finds itself overlapping into a few genres at once – it’s part quirky rom-com, part post-Spinal Tap band-on-tour farce, and part family drama (Andrew McCarthy plays O’Nan’s pedantic older brother), with each element bouncing off of the others at various points in the storyline. The other member of the Brooklyn Brothers band is Michael Weston, whose character Jim’s off-kilter enthusiasm is the perfect foil for O’Nan’s sad-sack Alex, just as Jim’s arsenal of toy keyboards offsets the intensity of Alex’s mournful, introspective songs. If They Might Be Giants, Flight of the Conchords, and The Z Brothers of IFC’s late, lamented comedy Z Rock had a battle of the bands…well, to be honest, it still wouldn’t sound much like Brooklyn Brothers, but Jim and Alex would probably end up busking outside the venue.

Brooklyn Brothers Beat the Best screens tonight at Solar One in New York City as part of IFP’s Independent Film Week, and is released theatrically and on VOD by Oscilloscope on Friday September 21. 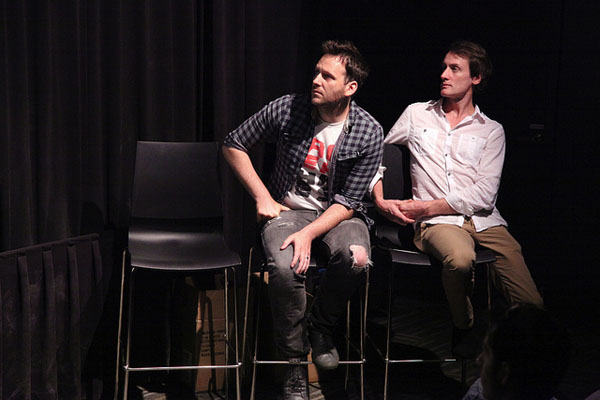 Filmmaker: You started out as a musician – how much of your own experience has ended up in the movie?

O’Nan: I guess writing stuff, you can’t help but put some parts of yourself into what you write, even if it’s just in little ways. Brooklyn Brothers was not autobiographical in the direct sense. It was more like I was attempting to pull out and highlight the crazy nature of attempting to pursue the creative process, and in that way it was my story in how the terrified/halting part of myself is in constant struggle with the more courageous parts of my nature. Tentative, insecure, second-guessing Alex, paired with lion-hearted, fearless, unaware Jim.

Filmmaker: How did you wind up moving into the film world? That’s not exactly a typical fallback move for a musician!

O’Nan: Yeah, not exactly the fallback job that parents have in mind for their kids. Or, I guess, one that musicians typically do. Those two scenes can feel very separate and quite exclusive. The music scene can have a sense of “Who gives a shit about what people think…it’s about the music!” But as an actor, the difficult thing is that you are literally the medium. So when people are judging the acting, it’s hard to not feel like they’re judging you. It’s not quite the same with music. At least it hasn’t been that way in my experience. And so the ways that you view yourself in music and film are very different. And then writing and directing – different once again. As a writer, you’re kind of the man behind the curtain, and unless you direct it yourself, who knows how it’s going to end up? So it seems like its hard to let it completely define you. And as a director, it’s your vision, but there are so many moving pieces and so many variables and different people and artists involved, that it seems strange to completely claim authorship of a film. Again, that’s just my experience.

Filmmaker: Have you had a lot of comparisons between Brooklyn Brothers and Flight of the Conchords?

O’Nan: We actually have…which I take as a huge compliment. Those two are funny as hell. I can’t say that they were necessarily any kind of inspiration. If I had any kind of comparison while I was writing…I used to tell people it was kind of like Once meets Planes, Trains, and Automobiles.

Filmmaker: What was the genesis of the idea for Brooklyn Brothers?

O’Nan: I actually came up with the title years before anything, and slowly the movie grew out of that. Only time it’s happened like that for a story with me.

Filmmaker: How did you wind up working with Michael Weston? I confess that watching the film, I had to work to erase the image of him as the homicidal psycho from Six Feet Under.

O’Nan: I had been searching for an actor to play that character for a long time, and I ran into him at an audition, and I paid him a compliment, ’cause I’ve always thought he was mad talented. We hit it off, so I invited him to the premiere of this film I did called The Dry Land, which was later that night. We talked a little bit after and suddenly it just hit me. I sent the script to him that night, we met up the next day at Umami Burger, and the rest is history.

Filmmaker: I read that he’s actually Arthur Rubinstein’s grandson, does he have any classical piano training himself?

O’Nan: Mike is that famous pianist’s grandson indeed, and Mike grew up playing piano as a kid, which was so, so awesome, because when I offered him the part, I had no idea that he knew how to play. I had pretty much resigned myself to the idea that someone would be offscreen playing those baby instruments, and that I would just hire a really great actor, because that was most important to me. So when he told me he played piano, I literally jumped up and hugged him in front of everyone at Umami Burger. There’s still a plaque there that says, “Two weird, awkwardly affectionate idiots were here.” It was a great moment, though, because I really wanted the music to be played live, and it ended up being just that. All the music in the film was recorded live. Nothing was pre-recorded. What you hear is what we were playing on screen. Even the song in the car.

Filmmaker: How did Andrew McCarthy end up playing your brother?

O’Nan: I’ve always loved him as an actor, and when he was brought up, I jumped at the chance. I really loved Andrew’s performance. He totally humanized a character that could have been seen as villainous, but that I really wanted to have his own dignity, and in a large part, a lot of what his character says in the film is true. Andrew added a whole other lovely layer to the film in my opinion.

Filmmaker: There are two distinct elements intertwining around each other in the film: straight-up comedy and personal drama. Did you have that in mind all along?

O’Nan: In my favorite comedies, the comedy is always treated like drama. I love stuff where the comedy opens you up and then the human stuff is slipped in with it.

Filmmaker: There’s a great dynamic between you and Michael Weston. Was that there right from the start or did it develop gradually?

O’Nan: Pretty much right from the start, Mike and I became extremely good friends. He’s one of the best human beings I’ve ever met. He’s a really wonderful man. I’m lucky to have him as a friend.

Filmmaker: What can you tell me about the other new film you’re in, Freelancers, where you’re acting alongside Robert De Niro and Forrest Whitaker?

O’Nan: Freelancers was a total blast from top to bottom, so much fun. And getting to work with that caliber of actor was such a dream come true – two of my great heroes, who I have watched and learned from for years. I gotta say, though, watching Forrest was like going to school. That man brings it every chance he gets. And it was a huge lesson to me how much he brought personally to the script that wasn’t even on the page. And the director, Jesse Terrero, was a real actor’s director. Every suggestion he ever gave me always added to my character. It was a great time. One of the biggest things I took away from it, though, was the almost 30 pounds of fat I gained for the role. I look so chubby in that movie, and it’s totally fun to watch [laughs]. That shit was hard to lose. I truly like dessert way too much.