by Michael Murie
in Cinematography, Filmmaking
on Sep 24, 2012

When D.P. Sean Meehan went to college he was undecided about what he would study. But in his first semester he took an American Film studies class and it prompted him to call his parents two weeks into school and say, “I’m sorry, I’m going to be a film major.” He then spent all his time turning Boston College’s film department into “my own mini film production major.” He took as many classes as possible and also did side projects to learn about the filmmaking process. Only graduating in 2011, Sean’s already freelancing regularly for a variety of clients.

I recently talked to him about a project that involved shooting in a very cramped location with low-budget lights.

Filmmaker: What is the project you were shooting?
Meehan: It’s a music video for Megan Harney’s first single, a song that’s titled “Escape.” It’s this very fun, upbeat song that’s about being in a touch-and-go relationship. Part of what they wanted was to shoot in a jail cell, and I was excited to see if we could find one. After a month or so of searching, her father, Robert Harney, found this place, the Pettaquamscutt Historical Society in Kingstown Rhode Island.

We’d already shot the majority of the video in another location, and this part in the jail was to fill it out, to give a more abstract feel to the video. 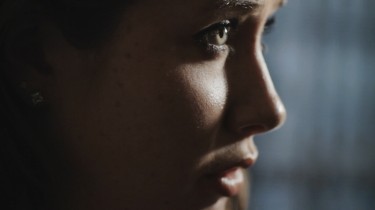 Filmmaker: How big, approximately, were the cells?
Meehan: They were very small, about five by ten. They barely fit two cots that were almost butted up against each other. The beds are bolted into the floor and walls, so it was hard to even get the tripod into the cell to get shots. I ended up having to spread the tripod out as low as I could get it, and have it balance in between the two cots. It was a very fun experience, and it’s the kind of interesting guerrilla filmmaking that I’ve come to really love.

Filmmaker: Were you shooting this all on a tripod?
Meehan: It was mostly on sticks, but we did a little bit of Glidecam work. The lighting was a challenge so I didn’t want to do too much with the Glidecam because I knew to keep things in focus was going to be an issue, I’d have to push the ISO pretty high after I stopped down.

Filmmaker: What was the lighting for the location?
Meehan: Basically there’s a single isle where all the cells are, and that was lit by one or two incandescent lights that were very dim. I shut those off anyway. The only natural light that we had was sunlight coming in through a couple of barred windows. That was going to pose a problem for lighting, or it was going to make it interesting at least.

We had no money for a lighting budget for this portion of the video, so the client brought his work lights, that I believe cost around $30. [They were] two halogen heads that combined are about 1,000 watts. They’re meant to illuminate everything, but not in a particularly beautiful way, so we had to be tricky and place the light in interesting places and play with the sunlight as best we could. What I was trying to go for with the look of it was that she was only lit by the sunlight coming in from the window. 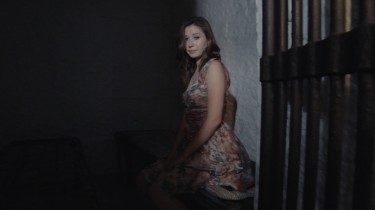 Filmmaker: How were you using the other lights? To fill in the background?
Meehan: I was using them because the sun wasn’t really strong enough for a good key. I was using those halogens to motivate as if I was motivating a practical; the practical in this case was the window. Luckily I had some full CTB (Color Temperature Blue filter) on me, because if not that would have been a very warm sunlight.

I propped the lights up on the cot and angled them in the same direction as the light across from her. They were very close to her face, and because of that it got a little bit softer, which was what I was going for. Because I was shooting from the other side, the shadow was facing the lens and the light was coming in almost like a back light – or more of a side light – and then we threw some CTB on there.

I really mean “we threw it on there.” Because of the way the lights were fixed, I couldn’t even clamp or clip the gel to anything, so it was a balancing act of just laying the gel in front of the fixture, waiting for a second and holding my breath and once it was settled, rolling on the take. Because of the angle of the light, and because I was shooting Cinestyle, I had a little bit of extra latitude, and it ended up being a lot nicer than I was expecting it to be.

Filmmaker: How did you know how much color to add to the light?
Meehan: I was eyeballing it; I do a lot of stuff by eye, by judging how it looks to me on the screen. It was just one sheet of full CTB on there, but I found that it looked right; the skin tones looked a little cool but that’s what we were looking for in the video. I tried to bake the look in as much as I could and that full CTB really made a big difference.

Filmmaker: You’re shooting this on a Canon 7D? What were the settings on the camera?
Meehan: In this case I shot in Cinestyle, with all the things that are recommended for appropriating your 7D for video; turning off things like Highlight Tone priority; there’s a whole bunch of them. We were shooting 24fps, the shutter was at 1/50th, I believe the ISO was at 160. If we went at any higher than that it was 320, and then it was lensed with an old Nikon 105 f2.5.

Filmmaker: That was the only lens you used?
Meehan: It was the shot that was the really beautiful shot, the one I liked best. But we mixed and matched. I used a Sigma 30mm a little bit, we used a Bower 14mm for some of the Glidecam work.

Filmmaker: Were you using all those pretty much wide open?
Meehan: For the most part I probably stopped them down about a stop. Especially that 30mm wide open gets kind of hazy, so I was mostly at f/2.8. I shot wide open on a Nikon 50 f/1.8 just because I find that surprisingly sharp. (At least my copy of it is pretty sharp.) The 105mm I think I shot mostly wide open, and then the 14mm was probably stopped down to at least an 8 because that was mostly on the Glidecam.

Filmmaker: How long was the shoot?
Meehan: We were in there for about three hours. I think in total we knocked off maybe 12 shots.

Filmmaker: Those lights can put out a fair amount of heat, how did you deal with that?
Meehan: It was certainly hot in there. It can obviously do things to people’s skin. It can make you a little oily, but I kept an eye on it. I knew that they were going to be hot, and I knew that Megan was going to be singing a lot. Some of the takes were going on two to three minutes long, and you can get tired, especially when you feel yourself getting hot. So it was necessary to take breaks and keep an eye on how everybody’s perspiration was to make sure that we didn’t look like we were drenched.

Filmmaker: Any other problems you had shooting in this location?
Meehan: I would say the biggest challenge was just trying to come up with creative shots. The option was to shoot out of the cell where some light was coming in from the window that gave us this blue background. Otherwise, the walls were pretty white and they were drab, but not necessarily in the best way. I found that it didn’t look interesting drab; it just looked like I was shooting her up against a wall.

I spent a lot of time coming up with interesting angles, sometimes canting the camera a little bit, trying to find different ways to make the composition interesting and to compensate for the actual look of the jail cell. The jail cells are very interesting and there’s a lot history tied to them so you feel it when you’re sitting there, but sometimes that’s hard to portray photographically.

Sean has blogged about the shoot here: Cross River Pictures