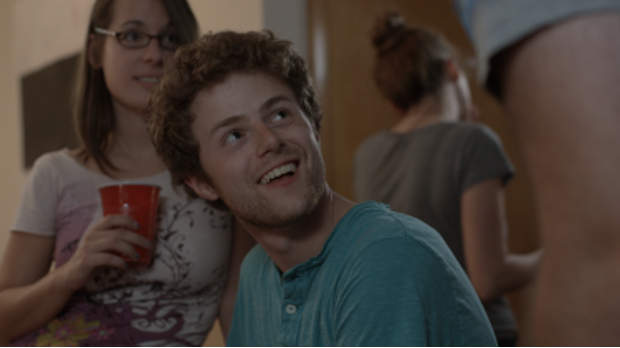 In this third part of the series about the production of the low-budget indie movie Game Changers, filmmakers Rob Imbs (director) and Benjamin Eckstein (cinematographer) discuss shooting with the Sony PMW-F3, shooting in S-Log, lighting issues, and the lenses used to shoot the movie.

Filmmaker: Ben, you already owned the Sony PMW-F3, was the decision simply to use the camera you had?

Eckstein: I’ve been fortunate that I own almost all the gear that I use on a day-to-day basis. From the beginning when talking to Rob, it was not really a discussion of “Are you trying to get the Alexa or whatever?” I think if I still owned the Panasonic AG-AF100 we probably would have shot it on that, and that would have been fine, but now I have a different camera, so that’s what we use.

We rented a couple of things, but for the most part we just used what I had.

Filmmaker: Are you shooting in S-log?

Eckstein: Yes. We’re shooting it to the AJA Key Pro in S-Log, which is still somewhat new to me. I haven’t been using it for a lot of my work. The thing that made me hesitate about using it was whether he was budgeting for a full color correct at the end, which he is.

On my own stuff, I see the benefits to shooting S-Log even if I’m the one doing the color correct. I still don’t do it for everything because I don’t want to allot the time to do a full color correct on certain jobs.

The thing that surprised me is how we’ve been lighting the film. We’ve been pretty sparse in what we have been doing, and I am definitely not a believer in “don’t light.” I love lighting. I think about lighting all the time, it’s totally the thing I’m most passionate about. But it was kind of surprising how much we were working with practical lights and just reshaping practical lights rather than bringing in a ton of our own fixtures. I think that is something that would have been different with the AF100.

Filmmaker: Why is that?

Eckstein: The S-Log is very forgiving. There were a bunch of scenes and locations where we thought, “Oh we’re going to have to ND these windows to manage exposure,” and we really didn’t have to. I was pretty shocked at the latitude. That certainly wouldn’t have existed with some of the other cameras I’ve used.

Imbs: As someone who’s constantly thinking about when we have to be out of there, every minute helps.

Eckstein: I didn’t want them to be waiting on me. That’s the thing I always hate when people are waiting on the camera. I’d much rather be waiting on actors or makeup, and not feel like I’m the one that’s holding people back.

It is a great camera. We could shoot this on a wide range of cameras and still have it look great, but the benefit of using the higher-end cameras is that it does afford you time savings with how you can light certain stuff.

Filmmaker: You did have to rent some gear. What was that?

Eckstein: We rented a doorway dolly. I knew from the start that using slider dollies was going to be limited. There’s only so much you can do with those, so having a proper dolly on a track was going to be beneficial.

We were going to rent some Kino Flos, but we determined that it was actually cheaper to buy them than renting them for a 20-plus-day shoot. Rob bought two that we have used a lot, and he’ll probably sell them at the end, which makes it even better financially to buy them rather than renting.

Filmmaker: What was your lighting setup? Mostly the Kino Flos?

Eckstein: I have one Kino, so we were using the Kinos every day. We didn’t break out my ARRI kit that much. I’ve worked with a lot of different lighting units and Kino Flos are great because they just set-up, they’re very quick and they are very efficient in what they do. So I knew that they would be time savers.

They do very different things than what a set of ARRI Fresnel’s will do. We wanted to work with supplementing a lot of existing light, which meant daylight during daylight scenes and so we needed to have daylight matched lights, and the Kino’s are essential for that.

We used two to three Kinos in most scenes. We occasionally supplemented them with my LEDs, all though I wouldn’t want to shoot a narrative like this with just LEDs, I think they are somewhat limited in what they can do.

I would say that the number one piece of lighting gear that we used is a $20 box of contractor bags from Home Depot. That was crucial and allowed us to use a lot of existing lights by using the contractor bags to flag lights. In some of our big scenes we walked in and I said, “All we’re going to do is flag these lights.”

Imbs: I remember on the third or fourth day we were shooting a scene where four guys are sitting around a table playing cards and I said, “Ben, are we ready to go?” and he looked at me and I was concerned because he goes, “I guess, I mean, I feel like I didn’t do anything.” I was concerned because when he said, “I guess.” I thought, “Oh shit, what’s wrong?” but it was because he felt like he had to do more.

Eckstein: There were a couple of scenes where I didn’t put anything on a stand and this was not a daylight scene or anything like that, this is shooting with lights. In some of our locations we used all practicals. We did have to go out to Home Depot and buy a case of incandescent bulbs, because these locations had CFL bulbs in all of their household lights, which are just horrible for filming. We had to replace a ton of light bulbs. But other than that, I didn’t bring in any stands. I hadn’t done anything other than taping contractor bags to the ceiling.

I’d have this feeling that I hadn’t done anything; but then I’d look in the monitor and it would look good. I don’t know what else I would do differently.

Filmmaker: You’re mainly taping the bags to walls and ceilings?

Eckstein: Yes. We had a poker scene in a space that had industrial fluorescent lighting; picture those two-foot long banks of lights. We took a lot of them out so we could flip the switch and have exactly the units we wanted on. If you create a box around it, then the light comes down and it doesn’t spill out all over the walls and environment. You have this nice little box of light, it creates a nice effect.

Obviously it only works depending upon what you are trying to do, but if you’re shooting guys playing poker… It’s not so much about creating flattering light; it’s about creating interesting light. The top down light — when you can minimize all the spill-off of the walls behind them — makes for a pretty cool look.

Filmmaker: What lenses are you using?

Eckstein: Just before this job I upgraded some of my beat up old Nikon primes. I bought three Zeiss ZF.2 lenses from Duclos, which have been cine-moded. It was eye-opening for me. I’ve always been a big fan of zoom lenses — I still use them for a lot of my work — but I didn’t think that primes were “all that and more.” This project opened my eyes to primes.

We used primes exclusively. I think we used the three Zeiss’s that I have and one of my Nikons. We did one car scene with the camera mounted on a hostess tray — which was another piece of rental gear we had — and that was the only scene were we used a zoom.

These are nice lenses. On the scale of cinema lenses, they are reasonably affordable compared to the really high-end stuff. They really look nice. It was my first experience using the Duclos moded lenses. I definitely think he does nice things to those lenses, and they make them very easy to work with.

Filmmaker: And they are still a lot cheaper than the Zeiss CP.2s?

Eckstein: Yeah. I think by a magnitude of two to three depending upon the lens.