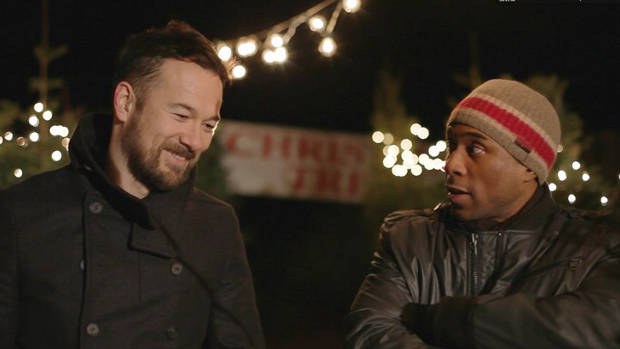 The last half of my 20s and the first half of my 30s were spent in Los Angeles working in mainstream television (That 70s Show) and film (Jesus People). I never made much money, but I did get to live out my dreams of visiting Kathy Griffin’s house, serving crumpets to my favorite comedic actress, Lisa Kudrow, and brushing my leg up against my favorite dramatic actress, Holly Hunter.

In the mid-90s, I took for granted the fact that gay characters were becoming well represented on television. After all, my favorite TV shows were thirtysomething and My So-Called Life and their realistic depictions of gay life were masterful. During my decade in L.A., I didn’t bother to write characters that reflected my own sexuality because it just didn’t seem necessary. I primarily wrote straight characters in mainstream situations.

Little did I know that one day my priorities would shift and I would become the director who dreams of telling gay-themed stories in all 50 states. That goal started in early 2011 when I moved to Montana to produce a talk show. Up until then, my sexuality had been an afterthought. No one cared in Los Angeles. If anything, being gay was a ‘plus’ in show business. But now in Montana, I quickly saw some major differences. Every blind date I went on was with a nineteen year old college student half my age or a closeted, married father of four just trying to fit into the straight world by putting up pretenses. Neither option was what I was looking for, so I decided to write a movie about “the Montana I wished existed” – my fantasy Montana where gay people were simply part of the visible culture. No parades necessary, just people like me who were alive and present, among the heterosexual families, the proud gun-owners and the fearful deer population.

As much as I appreciate big studio films about gay characters like Far From Heaven, Brokeback Mountain, and A Single Man, I think the world is ready for movies where the lead character isn’t self-loathing and prepared to kill himself by the closing credits. Apparently lesbians are allowed to have self-acceptance because The Kids Are All Right was a terrific film. It even played for a whopping two weeks in my town of Billings. I went opening night, worried there might be a boycott that would shut it down. It was so incredible to have something to watch on the big screen besides horror flicks and movies about robots in disguise...But back to my own efforts, Red Lodge (now available on Amazon) was my bid at creating a normal relationship drama, which happens to be set at Christmas time because I’m a real sucker for the holidays.

I delivered pizzas in the snow to pay for the filming of the movie. I didn’t raise any outside money for the film because I wanted to own it outright, first of all. And I really didn’t want someone weighing in on what had become a very personal story. There are so many things an investor could have had an opinion about.

-“Can the characters be straight?”

-“Do you have to hire a black actor and an asian actor for the lead characters? We hardly have any black or asian people in Montana.”

-Yes, I do. Those are the best actors for the roles.

-“Can any of the scenes involve stabbing a teenage girl in a bra?”

I wrote a movie that could be made for the price of pizza delivery money. The project really took flight when a team of talented film students from MSU Bozeman agreed to come on board, led by recent graduate Brett Frager. He sent me an incredible cinematography reel and knew exactly what the project need visually. Our camera operators, Jeff Dougherty and Andrew Preston, shot most scenes from two different angles – an approach that helped us capture most of the film in 11 days. Ivy Bryan, who worked on my talk show in Montana before running sound on the movie had a history of production in New York, including the old Bill O’Reilly show Inside Edition. Ben Robbins, a budding documentarian, served as my 1st A.D. With that team of five, we shot Red Lodge. The Best Western Clock Tower Inn provided lodging for the two lead actors that flew in from Los Angeles and local restaurants were kind enough to cater all of our meals. We shot footage at each dinner and provided it as a ‘thank you’ to the eateries for their Facebook pages and websites.

This is only of the only reasonable routes I can envision taking when it comes to shooting independent films. You must keep the budget next-to-nothing. The challenge, of course, is that older audiences want movies to only cost one dollar to rent. Thanks Redbox, for lowering the bar. You’ve gotta rent a hell of a lot of movies to make any cash with that business model. What works for Warner Bros doesn’t do it for indie filmmakers. And naturally, the younger generation expects every piece of art to be free and downloadable in an instant. Also not a great business model.

It will be interesting to see where independent films end up. Are we already Napster-ized out of existence? Is our only hope making free content for YouTube? Time will tell. At least this one thing we know for sure – people will always want pizza delivered to their doorstep!

In a perfect world, I’d live long enough to realize my dream of telling stories of small town gay life in all fifty states of the union. Montana is done. I’m half done with my next film, Ybor City, set in area of Florida where I’m now living. Again, I’m enjoying working with local actors and crew. It provides a great opportunity for them to work on a professional project and it gives me the chance to own another movie for the price of a box of crackerjacks. Only forty eight states to go. I’d better ramp things up to two films a year if I’m going to live that long.

Check out Red Lodge on Amazon or at his company’s website, Circa87.com.