An Afternoon Music Video Shoot with the Canon C300 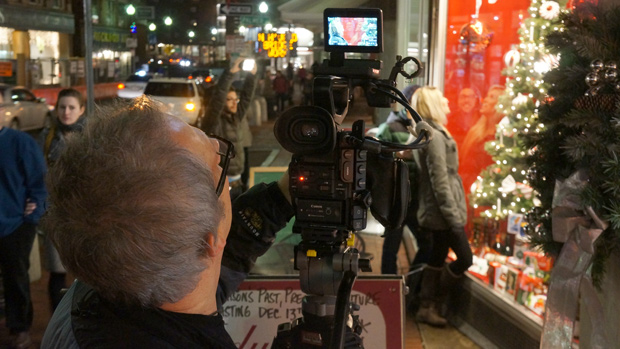 It’s a late fall Sunday afternoon and Rick Macomber is setting up his Canon C300 on a bridge near Harvard Square to shoot some inserts for a music video. The video is for the band Air Traffic Controller, and the plan today is to shoot two sequences of a couple that illustrate “happier times” in their relationship. Rick will first be shooting them crossing the bridge, and then they’ll move to Harvard Square to shoot some additional scenes.

With his production company Macomber Productions Rick has been shooting music, promotional and wedding videos since 1995 and has been using DSLRs for the last couple of years. He recently bought a Canon C300 because he said he “needed to have at least one quality camera on hand that I could use for both broadcast and web work.” He adds that another thing that prompted him to buy the camera was the two-year 0% interest lease with the $1 buyout that Canon was offering. 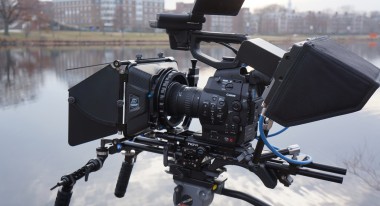 Rick also works as a news cameraman, which has really let him hone his craft. He shoots in a precise and economical way. He knows what he wants and manages to accomplish it very quickly, while producing stunningly beautiful images. Still, he’s open to suggestions from others, quickly embracing and adapting ideas from the cast and crew. At most there’s only three or four takes for each shot this evening, though, obviously, there’s no dialog involved in these sequences.

For this project, Rick is director, cinematographer and editor.

When I arrive, Rick has the C300 set up on a Miller tripod, with a Team Tilta rig and matte box. It’s late afternoon, and the sun hasn’t quite started to go down. We’re waiting for the actors, Eddie Nason and Andrea Lopez to arrive. Rick likes to use an Ikan D7w to monitor while shooting on the tripod, later switching to the C300’s LCD when the camera is stripped down to use on a Glidecam. 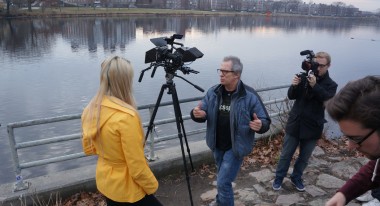 A few spots of rain have Rick worrying because he left his umbrella in the car two blocks away, but luckily it doesn’t turn into real rain, and he quickly starts shooting when the talent arrives.

The crew is really just one person; Adam Kerchman is acting as PA, carrying gear from one location to the next, and holding a Switronix Torch Bolt light when needed. Sean Meehan is there too, but he’s primarily shooting behind-the-scenes footage with his Canon 7D on a hand-held rig.

For the first take, the camera is on the riverbank and the two actors are walking across the bridge. With no extra crew, Andrea has her cell phone on and Rick is giving them instructions over the phone.

“Try one holding hands first,” he tells them. They walk across the first half of the bridge a couple of times, in between waiting for other pedestrians to amble across.

“I got it, okay go back and try one with Eddie’s arm around you,” he instructs, then Rick has them stop part way along the bridge. “Now looking towards the water, both of you smiling… Looks awesome… Look towards the water so I see your faces.” 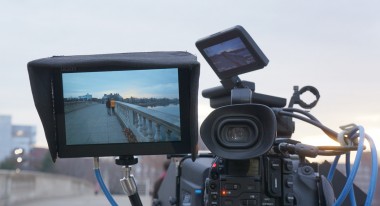 The view through the ikan D7w monitor

Happy with what he’s got, Rick tells them to stay where they are. “I’m coming up to you.”

For most of the shoot, Rick’s switching between a Tokina 11-16mm and a Tamron 70-200mm. He likes to use the 11-16 on the Glidecam for the wider field of view. “You know, with the C300 you have to shut it off when you change lenses,” he points out as he switches the lenses. That’s an important note about the C300; you can damage the camera if you switch lenses with the camera turned on.

The sun is going down, and Rick’s shooting at 850 ISO, F2.8. Towards the end of the shoot, in some of the darkest parts of Harvard Square, he goes to 1600. On the monitor the images look spectacular. 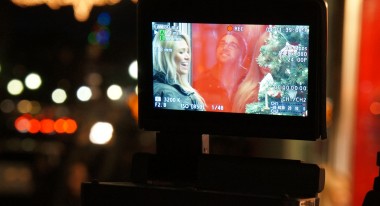 The view through the Canon C300 monitor

Rick is shooting this project with the Normal 3 (REC709) picture profile. As this was the first project he started after he acquired the camera, he was wary of using C-Log. As he explains, “it poses some challenges when using external monitors, and you have to pay close attention to your scopes.” However, now that’s he spent more time with the camera, he’s planning to use Cinema Locked (C-Log) mode going forward.

He notes that he really likes the peaking feature of the Ikan D7w. “I never thought I’d be in to peaking, but in this situation, peaking is working wonderfully.” While the C300 also has peaking, Rick doesn’t think it’s as good as the Ikan’s.

We’re now set up on the bridge, the couple walking towards the camera. Sean suggests pre-focusing the camera and having them walk into the focus point, then stop and kiss. Rick quickly agrees to the idea and a rehearsal takes place, the focus point being marked by one of the camera bags so the actors know where to stop. Rick also notices that in the background there’s a traffic light where the traffic sometimes backs up. With the sun setting the cars now have their lights on, and being out of focus, they create a nice twinkling effect in the background. Rick decides to coordinate the kiss with the lights in the background, which takes a couple of traffic light cycles to capture as he deals with coordinating actors, car lights, and other people walking into shot. Still, it probably takes less than ten minutes to get the final shot.

“Should I try some hand held?” he asks Sean and Adam, though the question is almost rhetorical. 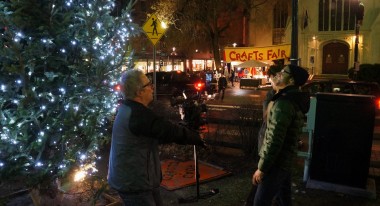 Shooting handheld on the Glidecam

We walk to his car where Rick switches the tripod for a Glidecam. The actors change jackets so it will look like the footage was taken at another time. There’s several long minutes of fiddling as Rick has some problems with the mounting plate, but then it’s a short walk to Harvard Square.

Here Rick shoots a scene just inside Harvard Yard. It’s done very quickly – there’s concern that he doesn’t have permission and someone might come and object to him being there. Rick has the camera low down, capturing the couple walking through an entrance tunnel towards him, while Adam is holding the Bolt light to create a slight halo effect. Sean and I hang back so we don’t attract attention.

Another couple of shots are quickly captured in Harvard Square with Rick again using the Glidecam. With the large number of pedestrians moving about, it becomes necessary to have someone stand behind Rick to prevent him from tripping over people. 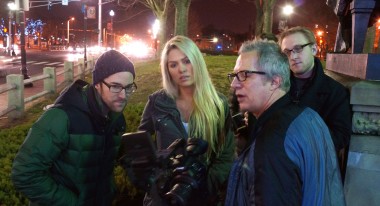 At one location Rick sees the reflections in a window and quickly sets up a shot with the actors close up to the window, their faces clearly reflected in the glass. The final shot of the evening has Rick rotating around the actors as they look at Christmas tree lights.

After a quick review on the LCD, Rick declares it a wrap. With these sequences completed he has most of the additional material he needs to cut into the music video. He still has to arrange shooting a studio performance of the band so that he’ll be able to cut the whole thing together. “It’s a little difficult to coordinate everyone’s schedule,” he admits, though he’s hopeful of getting that done in early January, and completing the video by the end of the month.