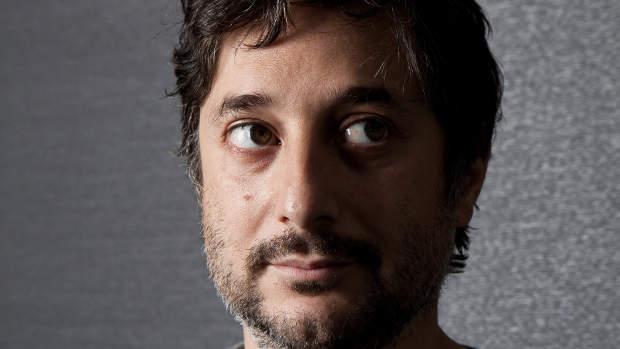 Yet despite this embrace of mainstream pop culture, Korine ultimately steers Spring Breakers away from the campy pastiche of similarly colorful genre work, such as Alexandre Aja’s Piranha 3D (2010) or Quentin Tarantino’s Django Unchained (2012), and turns instead toward lonelier and decidedly avant garde territory.

In fact, a key cinematic touchstone for Spring Breakers is Korine’s previous film, the controversial Trash Humpers (2009). Stylistically, the films couldn’t be more different: Trash Humpers used smeary video to film its wrinkly masked trolls, while Spring Breakers is sleek and sexy. But the desolate, forgotten alleys and parking lots of strip mall America afterhours are where both the Breakers and the Humpers clans feel at home. There, they shout, pout and lounge, accompanied by the aural texture of repeating phrases or mantras like “Make it, make it / Don’t break it…” or “Spring Breaaaak…” 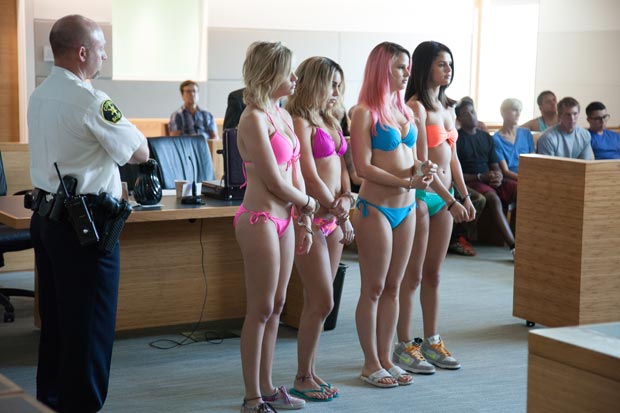 Both films share a lead actress: Rachel Korine, the director’s wife, who he describes as  bold. “I thought from the beginning that it was important that she be part of this so that  she could push the others,” he explained in our recent conversation. “There was a specific energy that I felt needed to exist so that they could all feed off of each other.”

And that’s not all the films have in common. “Maybe there’s a similar American vernacular of the streets,” Korine allowed, as he discussed everything from his low opinion of white guitarists to his childhood hot tub. “Maybe they are both marginalized characters, except the Trash Humpers were more like shadow people or shape shifters, while the Spring Breakers are all about exposing themselves. They are like little monsters, out in the open, shouting and eating up the world.”

Did you ever go on a college spring break like the protagonists in your film?

Spring break was a high school thing when I was growing up in Nashville, Tenn. I was a skateboarder so it wasn’t really my scene, but in the late ’80s, early ’90s it was a big deal; Daytona Beach, Redneck Riviera. Everyone would come back with lost virginities and vomit on their T-shirts. It always seemed like a quintessential American rite of passage.

[Laughs] Yeah, it’s Middle America’s walkabout. For a week, you can really go and do some serious awesome damage, and then come back and things are okay. It’s an accepted time of debauchery. I had a friend in New York who told me that he went to spring break on Jones Beach in the ’80s, went surfing and came out of the water with a hypodermic needle stuck in his neck.

Spring break started out as just a white thing. Now, it’s more integrated and diverse,  but in the ’80s and ’90s there was a sub-spring break, a black spring break, that was way better and way more radical. It was called Freaknik. You have to look it up; it was the best. It was just people boning in chandeliers 24/7.

[Laughs] Did you ever experience it?

I’ve never gone, but it’s a dream of mine. Yeah, hell yeah. I definitely want to go. I would say it’s as close to a religious experience as possible without it being real religion. I still think it happens a lot. I’ll probably go soon. I prefer partying with black people. I just don’t like white music. I hate any kind of music where white people play guitars.

What about music with a black person playing guitar?

That’s, like, a little more acceptable, but a white person playing guitar? I don’t understand why you would do that anymore. It’s been done so much; there’s just nowhere to go. All you’re going to do is ruin it for everybody. Honestly, you’re going to tell me a white guy who picks up a guitar in this day and age is going to do anything exciting, anything that hasn’t been done before? I can’t imagine it.

Couldn’t you say the same thing about a young woman — say, Britney Spears — singing or playing the piano?

No, because there are so many more things you can add to it and ways that you can filter it. It’s just infinite. Pop music is infinite. Rock ‘n’ roll is dead.

Do you play any instruments?

No, I don’t. I actually think that I’m tone deaf — like being color blind, but with sound.

You worked with the young electronic musician Skrillex and the drummer-composer Cliff Martinez, who has scored films from Sex, Lies and Videotape (1989) to Drive (2011), to incorporate mainstream music and haunting mantras that echo from scene to scene. How did you design the film’s sound?

I imagined Spring Breakers as a pop poem. It has music or some type of sound design nearly from the beginning until the end; sound is just as present as the image. There are visual hooks and repetition throughout — like the choruses in a pop song. I also wanted the music to work on you in a physical way, so we used a lot of low-end, heavy, super-guttural bass. Above any type of articulation, I wanted it to be a “Bam!” to the head.

Cliff Martinez is one of the best composers in the world. And at the time, Skrillex was in the air everywhere — and I liked the idea of using someone from the generation that the film speaks to. Skrillex’s music mixes avant garde, gnarly, aggressive electronic bits with elements of poppy Euro, almost cheese, yet somehow he puts them together in a way that makes them very, very beautiful. His music is both abrasive and poppy — the way I wanted the film itself. 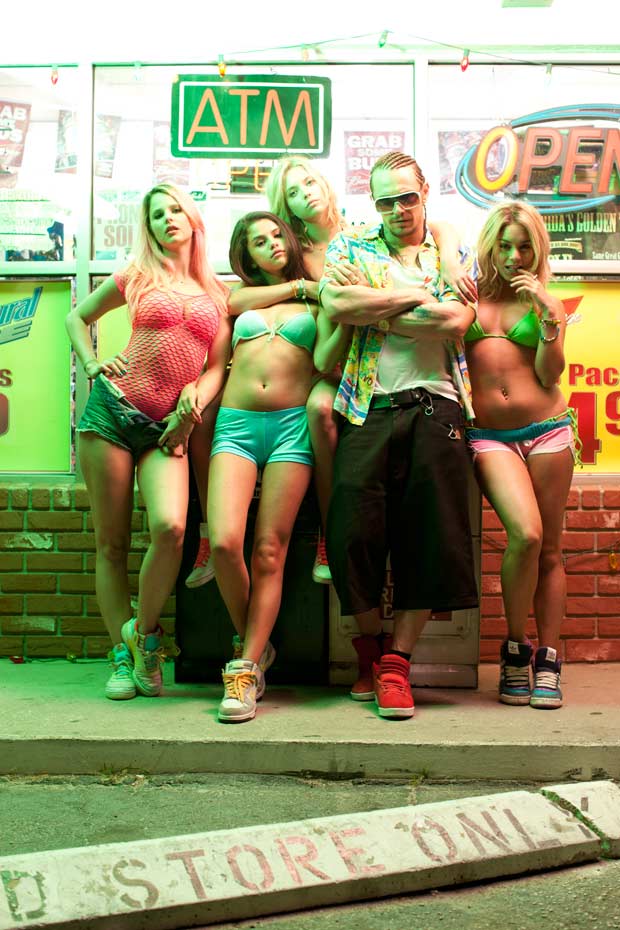 I got both of them involved at the beginning. We met, discussed things, and then everyone went their separate ways to make music. Cliff composes in his house outside of Los Angeles. Sonny — Skrillex — is playing and touring constantly, so he made the music on his laptop, in his hotel or on the bus. They composed different sequences, though there were times where I’d give them both the same scene to score separately — and completely differently — and then we’d mesh the two pieces of music together. It was like playing a game. Eventually, the pieces became a single entity, one 80-minute composition where it was difficult to know who did what or where one thing begins and another thing ends.

Britney Spears’ ballad “Everytime” stands out in the score; it provides the basis for one soon-to-be-notorious sequence where music takes center stage.

That song paired with that violent montage is like a strange opera to me. I wrote it at a Holiday Inn in Panama City, Fla. It was spring break and everyone was partying, fucking in the hallways, lighting things on fire, blasting Taylor Swift, eating Subway sandwiches and Dunkin’ Donuts. I probably listened to that song 200 times in a row; the piano especially stayed with me. It was a haunted piece of cotton candy, a distraught lullaby so horrible and beautiful.

The color in the movie is sumptuous, like cotton candy, too. How did you design the palette and lighting?

I envisioned the movie lit by nail polish and Skittles. Benoît Debie, the cinematographer, and I explored that  idea in the color palettes, production design and lighting. We used red lights and specific filters to create a candy-coated reality. It’s like the real world pushed into something more strange and hyperreal and violent.

At times,  realism is not enough. The idea of logic and truth can be limiting; sometimes you want to transcend it, go into another place. I wanted this film to seem like a fever dream, where you were dancing in and out of logic. It’s a ride, an air, an experience.

The movie’s never really about spring break. Spring break is more a metaphor than anything else. After the characters get to Florida and start partying, everything shifts. They are taken off the beach to the other side of town, to the non-touristy places, the dangerous areas. Spring break represents their dream of freedom, their dream of abandoning responsibility.

How did financing Spring Breakers compare to producing previous projects?

There are different variables, but financing is always the same and it’s never exciting. I wrote the script, got these actors, said, “Look, I need the money,” and someone gave it to me.

Sometimes I think about Spring Breakers and I can’t believe it really actually exists. That’s what surprises me most about this film: the miracle of its existence. There were so many people along the way who said it wouldn’t be able to happen, especially not with the cast that got involved. That you couldn’t see these actresses in these situations in these places; or that you had to shoot everything in a studio on a backlot; or that you had to do this or that. People tell you all the time what you can’t do. It’s everyone’s favorite pastime.

What brought you to filmmaking?

My parents got a hot tub at the house where we lived in Nashville when I was about 16, a sophomore in high school. It only worked for, like, one season, but for a little while, this hot tub worked. One time when it was cold out, I was in there talking with my dad and he asked me what I really liked in life. The only thing I could think was movies, so I talked about that. As I was talking, I thought, “Maybe that’s something that I could do.”

My dad loved movies, so we watched lots of films growing up. I lived near Vanderbilt University where the Sarratt Cinema had $2.00 double features. I would go after school while my parents were at work, or I would skateboard over with friends. That’s where I first saw W.C. Fields movies, Marx Brothers movies and Fassbinder films for the first time.

Fassbinder is an interesting touchstone in a way in terms of this hyperreality; emotionally truthful and yet veering off into this kind of crazy place.

The honest truth is that a long time ago, I stopped thinking about other movies. The longer I’ve made movies, the less I think about other films — in a conscious way, anyway.

When I was young, I was much more of a cinephile than I am now. Making films as a kid, it was important for me to think about other directors; I was voracious. At one point, that was what I cared most about. I was 19 or 20 when I wrote Kids, and at that point, I watched a lot of teen movies with nonactors — like Los Olvidados, the Buñuel film; or The Bowery Boys with Huntz Hall and Leo Gorcey; and one of my favorite movies ever is the Hector Babenco film Pixote, about Brazilian street kids in and out of prisons. Pixote really is one of the most fantastic — that movie’s like magic. The boy who starred in it was murdered, I think, by police death squads after the film came out.

Now I don’t watch even a tenth of the number of movies that I did then. It’s rare that I consciously reference anything anymore. At some point, I just stopped thinking about everyone else. All the films and music and books and everything that I love in life are in me. I try to create from a place that’s more personal, a place within myself. It’s like food you eat that helps you grow; the people and places and great works that you experience all push you in a certain direction. And then, I invent the rest.