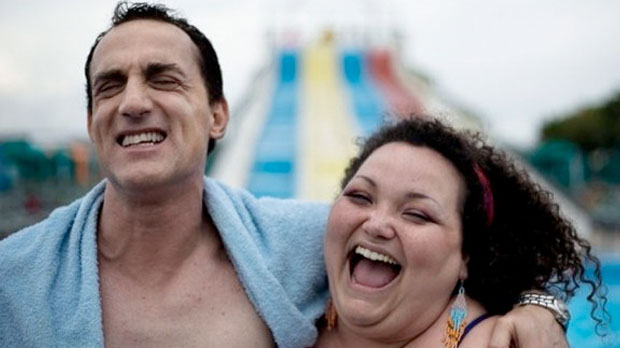 by Brandon Harris
in Directors, Interviews
on Mar 15, 2013

In the follow-up to his widely acclaimed 2008 international breakthrough Gomorrah, 44- year-old Italian auteur Matteo Garrone tells the partially comic, mostly tragic story of Luciano (Aniello Arena), a Neapolitan fishmonger whose simple life and aspirations are turned upside down when the possibility of instant fame and fortune as a contestant on the Italian iteration of Big Brother goes from mere dream to tangible reality. As his increasingly delusional family cheer him on, he chases the stardom that his friend and former roommate Enzo (Raffaele Ferrante) has already won, but with less than stellar results. As things go from bad to worse for Luciano, we’re put in the superior position of seeing his follies from the distance of Garrone’s restless camera.

With an insidious intelligence and a keen eye for the absurd, Garrone exposes the chasm between the real texture of Luciano and his family’s life versus and what the term reality comes to mean when mediated by the imperatives of glossy television production. As Luciano changes, feeling an increasing need to augment the terms of his own life in ways that are less than authentic in order to fully inhabit the reality TV persona he imagines he needs to thrive in the medium, our sympathies just barely remain with him. That he never gets the joke is the film’s most thoughtfully executed enduring satirical conceit, but a thinly veiled political anger bubbles just beneath the smile- and cringe-inducing narrative. Rendering an illusory world in bright, bold colors and bravura tracking shots, Garrone’s style has evolved from the neo-neorealism of Gomorrah; he happily invites you to question the nature of everyone’s constructed reality in the film via baroque, Fellini-esque flourishes that complement the occasionally dour realism on display.

Reality opens via Oscilloscope in Manhattan and Los Angeles today. 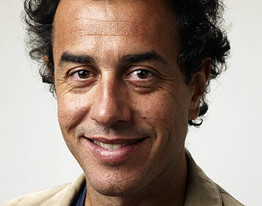 Filmmaker: I’m curious to know what pushed you toward this tale? Was your interest primary in examining the inherently deceptive nature of the reality TV genre and the way in which these programs invite both audiences and participants to delude themselves?

Garrone: I don’t know exactly. I’m always looking to do something different, to do something personal; I always want a new challenge. The story in this case comes from a true story that happened to the brother of my wife. The reality show is not so important to me, it’s the MacGuffin as in Hitchcock. The problem, and it’s not just his [problem] but his family, his neighbors, the society as a whole, they want to escape from everyday life and follow artificial dreams, which is of course connected to capitalism. I don’t want to judge that or be a critic of that because, as I said before, it is a true story that happened in my family and I live in a capitalist society and I am very weak and am seduced by the capitalist society. I am very close to Luciano in this movie. The interest in this story was the psychological journey that the character takes: he starts to build a new character for himself to reach his goal and he starts to lose himself. He starts to act like someone else and slowly he becomes crazy. This human aspect is the most important part of the story. There is also an aspect where I wanted to make a story about the contradictions within my country today and I think that might be the most interesting aspect.

Filmmaker: Were you at all influenced by the aesthetics of those shows? Your camera movements are much more subtle, more felt, than in those shows, but nonetheless perhaps there are similarities between the faux vérité you find on those shows and the type of cinema you practice?

Garrone: I am my own cameraman and I use moving camera in an emotional way, in unison with the actor. It is not like a television style. I use the camera, as in Gomorrah, to make cinema. I am not interested in a style like TV, I want exactly the opposite, I want cinema. Visually it’s like a modern fairy tale, a black fairy tale; from the opening shot I declare that the real can be a nightmare and vice versa. The end for me is more like a science-fiction movie than a fairy tale.

Garrone: Science fiction because the atmosphere we built when he goes inside of the house I wanted that last shot to remind you of science fiction. That said, directors are not always so clear on what they’ve done! But for me, it reminds me of a science fiction. It’s not so important really.  The point of the movie is that it is the story of a man who changes himself for reasons that are probably not so good. To me, Reality is not so different than Gomorrah. Gomorrah is a movie about crime systems. The point of view is from the bottom, from the slave, from the victim, of the crime system. Reality is a movie about show business, but it shows how dangerous it can be for those at the bottom of the system. Also, Gomorrah for me was a black fairy tale, like this film. The language and the way of making cinema may be different to some degree, but the films have some similarities.

Filmmaker: Was it easier to put this movie together than your previous movies because of the huge international success of Gomorrah?

Filmmaker: What do you gain and what do you lose as a director by shooting your own films?

Garrone: For me, it is a very emotional thing. I am with them when I am filming them. Every take has to be something that surprises me, has to be unique. I am always looking for moments that are unique during the shooting. That’s why it’s important for me to operate the camera because operating the camera mean to me that I can invent and create new ideas about the way to shoot directly with the actors as we proceed. Every movement of the camera depends on the movement of the actors. On my films, the actor can do something different on every take. Always we know very well what is the story, what is the scene. We always know where we have to start and where we have to arrive, but the way that we arrive can be different and it is something that I invent while I am dancing with the actor.

That said, I like to prepare the script and the visuals a lot. The visual aspect is one of the most important things I can envision when I write. I always write thinking like I’m making a silent movie. So visually I like to prepare very carefully and sometimes I work with storyboards, but when I go on set I am always ready to betray what I have done before in the script and storyboards because stuff happens behind the camera or there is a particular light or the atmosphere changes. I can change what I’ve done and follow the life inside of what we are doing. I feel free always to betray what we prepared, but I never betray the soul of the scene or the script, except in a superficial way.

Filmmaker: Once you shot the film, were you surprised by certain aspects of what you had done when you got to the editing room? What continues to surprise you about this movie, if anything?

Garrone: I used to always work on my movies in a way where I would save some money to shoot after we edit the movie the first time. So after the first edit, we’d screen the film for some friends, I’d realize that many parts of the movie were not so good. So then I went back and shot for another two weeks and then we’d edit some more. I always work in this way. I’m always trying to find what I like within the things I’ve shot and sometimes I change my mind, so this process seems like the best way to find what I really want.