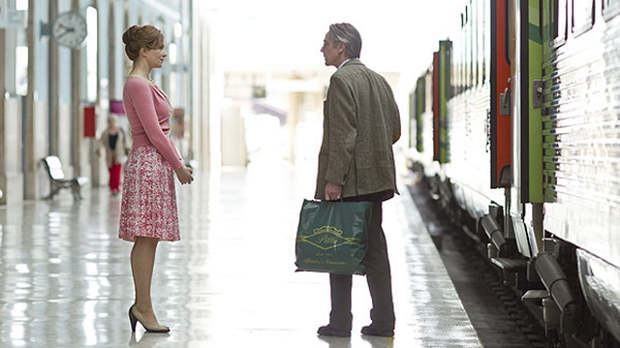 by Ariston Anderson
in Directors, Interviews
on Mar 29, 2013

Danish film director Bille August has consistently brought a strong vision to international stories. He is best known for Pelle the Conqueror, the 1987 film about Swedish immigrants in Denmark, which received the Palme d’Or, the Academy Award and the Golden Globe. He is one of the few directors who have won the Palme d’Or twice, putting him in the ranks of Francis Ford Coppola, Emir Kusturica, and the Dardenne brothers. His second came with the 1992 film The Best Intentions, a semi-autobiographical family story written by Ingmar Bergman.

Twenty years ago August explored love and revolution in The House of the Spirits, an adaptation of Isabel Allende’s debut book. Today he returns to this familiar territory with a film set during the final days of the Portuguese dictatorship, Night Train to Lisbon, which premiered at the Berlinale. August also returns to working with actor Jeremy Irons, who plays Raimund Gregorius in this adaptation of Pascal Mercier’s bestselling thriller-meets-philosophy novel.

Raimund, a Latin teacher from Berne, has a comfortable but exceedingly boring life, something we can infer from Irons’ first expression on the screen. Happenstance leads him to discover a book by a Portuguese doctor Amadeu de Prado, who lived during Salazar’s dictatorship. Raimund easily drops everything in his monotonous existence and takes a train to Lisbon to hunt down details of this strange and tortured man. What he finds are many closed doors, but a few slowly opening. As he struggles to uncover this man’s fascinating life and the relationships he left behind, Raimund reflects on how painfully lacking his own has been. Night Train to Lisbon is currently playing now in theaters across Europe.

Filmmaker: What appealed to you so much about the book itself?

August: I read Night Train to Lisbon six or seven years ago when it was first published, and I really liked the book. There was something special about it that kind of stayed with me. Then I was offered to do a film based on the book and I said yes immediately. What I liked very much was that journey that Raimund goes through, this man that lives a quite simple, ordinary, boring life.

At the very beginning of the story, he meets this girl on the bridge who has this book, and he becomes completely obsessed by the people in the book, and it. Because what happens in the book is something that he is yearning for himself, these people who live a very strong life and who have a lot of passion. They are living on the edge of a kind of revolution and since he has such an ordinary, boring life, I think he is yearning for that contact with his inner soul, his emotions. That’s really why he makes that crazy, weird decision to leave everything behind and jump on the train to Lisbon.

And there was a beautiful atmosphere in the book, a kind of mystery. There was a very special flavor to the book that when we started to work on the script, it was something important for me to try to keep, that universe full of inaccessible people .

What I also found interesting was that the history of Portugal and especially that period of dictatorship is something that very few people know anything about, because they know a lot about Spain or Franco. And also because the fascists in Spain were much more expressive. Salazar, the dictator, he was a very elegant man, he was a lawyer. The fascists in Portugal did not look like a fascist regime but they were very, very cruel. So the suppression was the same, and that was something we were also trying to capture in the film.

Filmmaker: What was the biggest challenge in adapting the book for the screen?

August: Because the book was written by a philosopher, Pascal Mercier, there’s a lot of philosophical stuff in half of the book. And of course in a film you can’t really have that, because literature is a more intellectual medium, whereas film is an emotional medium. But still I also wanted to keep the philosophical part of it. I thought that was important, and it was also important for Raimund’s character.

So what we did was, for every particular moment or state of mind Raimund is in, we found a quote in the book that could reflect on that. For instance, in the very beginning, the first time he reads a book it says something about, ‘You can change your life in an instant,’ and he reflects on that.

Every time we quoted something from the book, I said that it should be relevant to the story because otherwise it would stop the film, because the film doesn’t flow like a book. We couldn’t have, all of a sudden, a very deep philosophical thought that would stop the narration. So we had to find something that was relevant for the ongoing pace of the story.

Filmmaker: As a director, how do you find that epic story that you know you have to put on screen?

August: I had a vision in my head already. I guess that’s what you remember from all good books you have read or all good films you have seen. It’s a certain atmosphere that’s very hard to describe but that’s what stays with you and that’s what I was trying to transform into the film.

You know I read tons of books and most of them I really think you should never touch, they should just remain as good books. But sometimes if I read something I can see, “Maybe this is, here is a good film, this could be something interesting,” and then the process starts there. I’m involved in another project now, which is based on a written script, so it really doesn’t matter. It’s about the story, it’s about the interaction, it’s about the characters.

It’s an instinct, you know? If I get obsessed by the story or by some characters in the film and if I have that urge and feel this need to go on screen then I can’t stop the process. And there needs to be that urgency, otherwise it doesn’t work.

Filmmaker: How much has the production process changed since the beginning of your career, since Pelle the Conqueror?

August: I think in working with a production company or producers, the most important thing is that you agree on the same film. And if you don’t agree from the beginning then you should forget about it, make another.

But, you know, in this case, it was actually the producers who bought the project, bought the rights to the book. And then they asked me if I was interested to get involved, so of course for them it’s also their baby. They are very much emotionally involved.

Filmmaker: What have you learned from working with actors over the years, how to get the best performances out of them?

August: If you have intelligent actors, they are normally very cooperative. You know good actors become kind of ambassadors for their parts. They normally have clever suggestions and they say things that you never thought of, because they see from their character’s point of view and they ask questions you never thought about. So it’s a collaboration.

Actors are the same, in a way, because it’s the same process, how to approach a part. Actors can be different in the way that some actors want to talk a lot. They need to talk all the time. They need to communicate. I don’t know if they’re nervous or what it is, but they need this. And other actors they just need one word. And they know if it doesn’t work, they get very stressed or irritated, so it’s more building up confidence. It’s also about reading, for me to read the different personalities. I just need to support them, to get in the right direction.

I spend time with actors before shooting, but I think making this kind of film, so much is done in the pre-production, because if you don’t agree from the beginning you cannot have a huge discussion on set. There’s no time for that. So if the actors are in the right direction from the beginning and they know what they are going to do, then you are fine-tuning when you are shooting. And of course you can discover things, but if you are on the wrong path then it can be very difficult to turn around.

I make a lot of mistakes but, but I’m also open to listen. I feel very uncomfortable if I don’t know what I want to do. I think it was actually Ingmar Bergman who said, “You cannot improvise over an improvisation.” And also the actors need support; they need somebody. I’m a conductor. I need to know how to get everybody to play the same song. If I feel insecure, or if they feel that I don’t know what I’m doing, then they lose their confidence.