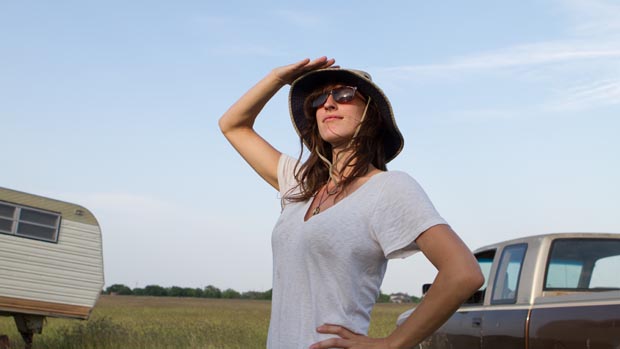 “I once had a director cry when she walked through the main character’s set because she was so moved. That was definitely one of the most rewarding moments for me as a designer.” In the past few years, production designer Jade Healy’s hands have touched a diverse selection of notable independent films: Ti West’s House of the Devil, Zeina Durra’s The Imperialists Are Still Alive!, Sundance success happythankyoumoreplease and Joe Swanberg’s Alexander the Last. She began in production, as an assistant producer on Asia Argento’s The Heart Is Deceitful Above All Things, after interning for Muse Production’s Chris Hanley; next she worked on Edmond, handling the delivery of the film to the distributor, and then produced M. Blash’s Lying in upstate New York — but she wasn’t sure that producing was the road she wanted to take. “I had a love/hate relationship with producing — I was so grateful to be working in film, but the stress and fear was overwhelming. I still get nervous checking my voicemail.”

When the chance came to work for free in the art department on a tiny film called The Blue Hour, Healy jumped on it. From there she went on to be the decorator on Cabin Fever 2: Spring Fever, with Ti West, and West then brought her onto his retro-horror feature House of the Devil as his designer. Three years later, she has just completed West’s The Innkeepers, along with half a dozen other projects.

In between design jobs, Healy took a vacation to Costa Rica with her friend Kris Swanberg along with d.p.s David Lowery and Ben Kasulke. The resulting film, It Was Great, But I Was Ready to Come Home, co-directed by she and Swanberg, premiered at SXSW 2009. Healy and Swanberg also starred in the film as two friends on vacation. Healy has since been writing and plans to finish several scripts during her next break between movies, but admits that it’s hard to find time: “I always say I’m going to stop, and then something else comes along.” She was brought up as a hands-on, grab a paintbrush type of designer, and says that her willingness to do hard labor has sometimes surprised crew used to working on larger budgets.

She’s learned some things over the years: “Just because something looks amazing doesn’t mean it’s right for the character, or the film. I like to think I have learned to practice more control. My goal is always to create sets that help push the narrative forward, not distract from it.” Does she feel limited working with the sometimes miniscule budgets of indie films? “Not limited, per se — it’s amazing how far you can stretch a dollar — though sometimes I get sad that I’ve memorized every curtain style on offer at IKEA.” — A.V.C.