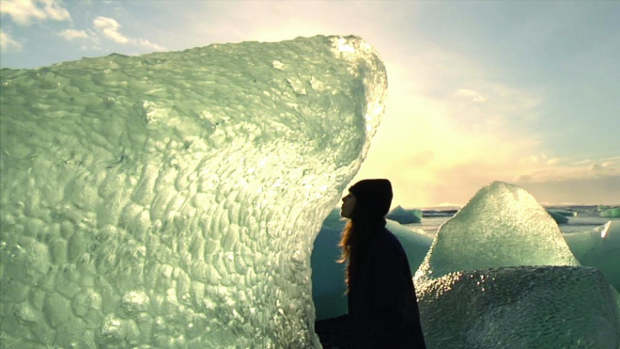 I Send You This Place

by Nick Dawson
in Directors, Interviews
on Jun 7, 2013

The following interview was conducted earlier in the year to coincide with the New York festival premiere of I Send You This Place. It is republished here to mark the start of the film’s theatrical release at the reRun Theater today.

The debut film from husband and wife team Peter Ohs and Andrea Sisson (also known collectively as Lauren Edward, a composite of their middle names), I Send You This Place is a very unconventional documentary which tackles themes of mental health, creativity and the natural world through the prism of the couple’s trip to Iceland. Gorgeously shot and made with genuine invention by Ohs and Sisson — whose backgrounds in science and design bring a fresh approach to their interpretation of the non-fiction form — I Send You This Place establishes the pair as directors with a bright future. I Send You This Place directors Pete Ohs and Andrea Sisson

Filmmaker: What prompted your decision to make I Send You This Place?

Ohs and Sisson: We wanted to make a film in Iceland (specifically while on the Fulbright grant). We actually started out trying to make a narrative film but the reality of our situation being isolated, living in Iceland, recently married, and having our worldview challenged from every angle dictated that the film, would ultimately be out of our control. So, we gave in to the experience/the nature of the environment and began documenting our experiences. In that way, it was not a conscious decision, it was simply our method to maintain some form of sanity.

Filmmaker: In the film, you two share a “Designed By” rather than a “Directed By” credit. Why did you express it like this?

Ohs and Sisson: While making the film, we were exploring ideas of “design.” The film feels very much like a design — of an idea or a concept. We were watching a lot of TED talks, especially designers who are excited and advocating “design thinking” as a progressive creative model, so consequently we followed a lot of the theories and properties of “design” and “design thinking.” Andrea is also a designer, so a lot of it really came from that. Also, because it was just the two of us documenting our own experience, very little of it really felt “directed.” Documentaries often seem to exist in a grey area with the idea of “directed” so we tried a new way to describe what we did. We know it is an unconventional film, so from all of the above, we felt the credit was appropriate.

Filmmaker: How did you work together on the film? What was the division of duties?

Ohs and Sisson: We pass the duties back and forth continuously. We call this a “We-Lap.” Framing shots, structuring edits, tweaking sound design — one of us has a go at it, then the other sits down and makes a pass, or does a “lap.” It requires a lot of trust but ultimately, we find it to be extremely freeing. It provides space to experiment and removes the pressure to get everything right the first time, because you know it will have to make it through another set of eyes, another filter. It also keeps things fresh because when you return to an edit or an idea, there is new energy inside of it. It’s not the same as when you last saw it.

Filmmaker: Did the very personal nature of the film’s subject matter help or hinder the creative process? Did there being two of you help find some objectivity? (Or was objectivity not desired?)

Ohs and Sisson: Helped and hindered. After Iceland, we thought we were done filming and started editing. Then we realized the story wasn’t over. We were still living it. Having ourselves as the subject matter created a strange “Charlie Kaufman-esque” feedback loop to the experience. We would be editing and come to a point where we were stuck, turn on the camera and record ourselves talking through the situation, then put that into the sequence.

Filmmaker: I Send You This Place pushes the boundaries of the documentary form. Which films or directors were inspirational in this regard? And how did your experiences beyond film (i.e. in design, mathematics, computing, science) help you see beyond the usual constrictions of the form?

Ohs and Sisson: The Reykjavík library has a lot of DVDs from the BFI collection (which seems to be Europe’s answer to Criterion). We were basically watching a movie a night during the whole 10 months we lived there. Particularly inspiring directors/films were Pasolini’s Arabian Nights, Antonioni’s Red Desert and Tati’s Playtime — definitely films that pushed the boundaries with narrative. Scorcese’s Who’s That Knocking At My Door? reminded us that a feature film can be just about anything (especially a director’s first). We were also inspired by the hybrid-documentary Searching for the Wrong-Eyed Jesus and the memoir doc Tarnation.

Andrea’s design background was crucial to building the film outside of constrictions. Also, her general lack of filmmaking knowledge meant she didn’t even know what rules she was continuously breaking and/or ignoring. Pete’s Computer Science background helped with the film’s structure and keeping it grounded. Even though we were questioning reality and perspective, we still wanted there to be some sort of logic to the equation.