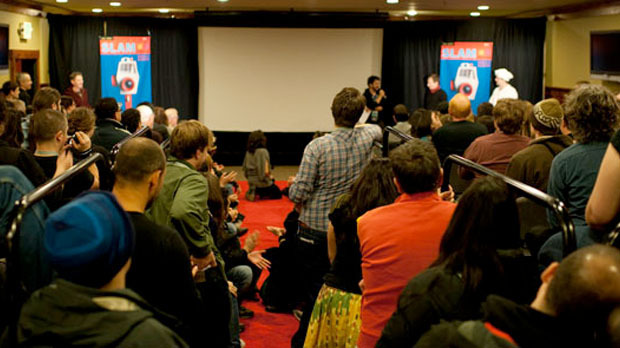 by Dan Mirvish
in Distribution, Festivals & Events, Filmmaking
on Sep 10, 2013

The author of this guest essay is a filmmaker whose most recent film is Between Us. He is also the co-founder of the Slamdance Film Festival. — Editor

I recently wrote an article about 12 Steps to a Saner Festival Plan in which I suggested the volume-method of festivals: Get your film into as many festivals as you can, and build momentum from one to the next. Unfortunately, a lot of people read that article. And the one consistent question I’m getting is if we’re broke filmmakers, how can we afford to apply to so many festivals? Chances are you budgeted some money for festival applications, and then promptly spent that money as part of your contingency. So here are 12 more steps to help you save some money:

Yes, there are thousands of festivals around the world, but do your homework. If you see a festival that sounds nice, see what films they showed the year before. Would your film fit into their program? If it’s a Gay Cuban Festival that only shows Caribbean films in Spanish, and you have an Arabic-language Israeli vampire epic, then you should probably pick a different festival. But dig deeper. Track down some filmmakers who attended the year before and ask them what they thought of the festival, and also if they have a contact for the head programmer. Withoutabox can be helpful in narrowing down your festivals and good for deadline reminders, but it’s just the tip of the iceberg: Don’t count on it solely.

2. Make a Personal Connection to the Festival Programmer

Try to figure out who the main festival programmer is. Sometimes they’re the “artistic director,” sometimes a “senior programmer” — it’s different for every festival. Read their websites and look at their press releases. All top festival programmers have egos that get fulfilled by putting themselves in their own press releases. So that’s usually the best way to find out who’s really calling the shots. Then try to track down their personal emails, not just the “info@suchandsuchfestival.com” on the contact page. Or call them. Or find them on Facebook or Twitter and send a message that way. It really doesn’t matter WHAT you say as much as that you establish a personal rapport and that they remember your name, and the name of your film.

Ask them if your movie is right for them. You may already know the answer to this (see #1), but they don’t know you know. So ask. Keep it short and direct. A one-sentence logline, names of fancy actors if you’ve got ’em and what your premiere status is. Remember, all festival directors love to play premieres, so even if you don’t have a fancy cast, it will get their attention if you offer them your World Premiere. And if you’ve already had your world premiere, then offer your International Premiere, North American Premiere, Iberian Premiere, Canadian Premiere, or Dakota Premiere. If every festival screening isn’t some kind of “premiere,” then you’re just not creative enough. Virginity is relative when it comes to films.

Whether it’s fancy actors, a hipster band on your soundtrack, or an Oscar-winning executive producer, you should probably suggest that they might attend the screening. Don’t over-promise, but don’t be shy either. Festival directors know full well that actors won’t always be able to come, but you can’t ask your actors if the festival hasn’t accepted the film first. Likewise, no one’s going to blame the film director if the actor is shooting another movie at the time of the festival. As much as we all think our actors are going to join us in the hot tub in Park City or the Maserati test drive in Napa, they’re called “actors” because they “act” and tend to have different agendas and schedules than yours. The good news? If they can’t come to a festival, then you, the filmmaker, are the star attraction, not them.

It never hurts to ask for a fee waiver. No one will think less of you for asking, and some festivals routinely waive their fees. Many don’t. But you won’t know which is which unless you ask.

If after you’ve contacted the fest director, offered up your premiere and falsely promised your A-list actors, the festival director will likely reply, “Yes, your film sounds great; please send it to my attention!” That’s usually code for waiving the fee. Just send in the film and don’t pay the fee. If they really still want the fee, the festival coordinator will ask for it. But by then, the festival director’s probably already watched your film.

Many international festivals get state funding and don’t have application fees. Track down those festivals and apply. What do you have to lose?

You could still go broke mailing DVDs around the world. FedEx or DHL can charge up to $80 for a package to Europe, and more if it’s a rush. For one thing, apply early and avoid rush postage. Have faith in the US Postal Service. Forget the high-priced couriers (remember, UPS is just another way of spelling “oops”). To send an international Priority Mail package is only around $16, and usually gets to where it needs to go in under two weeks. USPS now has tracking numbers on all domestic and international packages. And if it still gets lost, stuck in customs, or delayed, you can always strike up a nice email relationship with the festival coordinators while you’re tracking down the film. When it finally does arrive, they’ll know all about the film and watch it right away.

Especially for international submissions, festivals are increasingly happy to just get a password-protected Vimeo link. More of their programmers can watch the film simultaneously, so you can submit the film instantaneously (handy for late deadlines) and for you, the mailing costs are free! Just make sure that you’re happy with the quality of your Vimeo, and use an easy password. Paranoid about getting bootlegged? You should be so lucky! Oh, as for Withoutabox streaming? A lot of fest directors have complained about their reliability. For shorts, they’re probably fine, but for features, I’d aim for Vimeo if you can.

Forget online links. A DVD is much better quality and shows that you cared enough to burn a disc and scribble your name in Sharpie. It’s much less likely to get lost in the festival’s system if it’s a DVD. Or maybe it’s the other way around… hard to say, really, so ask the festival coordinator, who by now is your new best friend. Every fest will have different preferences.

11. Meet Festival Directors at Other Festivals

If you have a film that didn’t get into Toronto or Sundance, it still might behoove you to visit. There inevitably will be festival panel discussions, brunches or parties where you can track down hungry festival directors from international or regional fests and schmooze them with a DVD directly. Sure, they might get drunk and lose it, but you never know. If nothing else, you’ve made a personal connection and can follow up later.

Yes, bribes can be expensive. But if you have leftover product placement beer from your production, put it to good use. The coordinators and interns at a festival office won’t know how old it is! And what better way to make sure your film gets “in the system” and not “lost in the mail” than to hand-deliver it taped to a case of PBR? And if you still can’t afford a bribe, then go with blackmail. I can’t think of a festival director alive who doesn’t have some embarrassing Weiner-esque selfie of them floating around Instagram or Facebook somewhere. It’s your job to find it and put it to good use.