Disturbing the Power Structure? Citizen Koch and the Sponsorship of Public Television 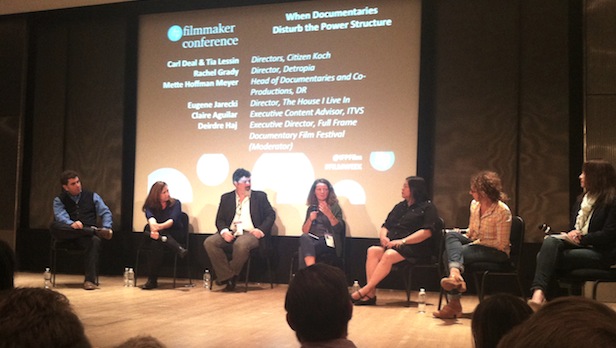 by Katie Carman-Lehach
in Distribution, Filmmaking
on Sep 18, 2013

One of the more lively discussions I’ve seen so far at the Independent Filmmaker Conference, “When Documentaries Disturb the Power Structure,” included a panel of heavy-hitters from the documentary world including both filmmakers (Eugene Jarecki, the director of The House I Live In; Rachel Grady, the director of Detropia; and Tia Lessin and Carl Deal the directors of Citizen Koch) and representatives from public broadcast (Mette Hoffmann Meyer, the head of documentary and co-productions at DR TV/Danish Broadcasting Television and Claire Aguilar, Executive Content Advisor for ITVS/Independent Television Service), all moderated by Deidre Haj, Executive Director of the Full Frame Documentary Film Festival.

The panel’s topic was ostensibly about (from what I surmised from the title anyway) the successes of these documentaries in “disturbing the power structure.” But discussion quickly turned to a recent New Yorker article, “A Word From Our Sponsors” by Jane Meyer, that spoke directly about two films represented by three of the speakers on the panel: Park Avenue, Gibney’s doc about a Park Avenue apartment complex whose residents include David Koch, of the Koch Brothers; and Citizen Koch, which, if you read the article (which I highly suggest you do), was to be funded by ITVS with the intention of PBS broadcast but was dropped by the funder after the airing of Park Avenue.

ITVS (which gets 80% of its funding from PBS) cited “artistic differences” which caused them to cancel the Citizen Koch commissioning contract, but the filmmakers have charged that the funder was reacting to pressure from David Koch, who is on the board of WNET and WGBH, the New York and Boston Public Broadcasting outlets which air Independent Lens, a likely destination for Citizen Koch.

While the discussion seemed to linger a bit too long on the story of Citizen Koch and ITVS (with both the filmmakers and Claire Aguilar feverishly arguing and explaining their sides), I have to disagree with another panelist, filmmaker Eugene Jarecki, who criticized the direction of the conversation as being inside baseball. What happened with Park Avenue, Citizen Koch, and ITVS speaks to the issue of documentary funding and sponsorship. This particular case is really a reflection of the bigger story, the 40,000-foot view brought microscopic. It’s almost too perfectly “meta” when you think about it — the same exact issue that these filmmakers have been making a movie about (undue influence by billionaire industrialists with political motivations) has now become their own personal issue and cause. At the least, their story will be a conversation starter for documentary filmmakers and lovers of public television surrounding issues of conflict between subject matter and funder. It’s only after we begin to explore what happened in this situation (and others like it) that these issues of critical influence on public broadcasting and the independence of our public media can be resolved. Maybe then we’ll be able to discuss how “documentaries can disturb the power structure,” instead of how the process of making them has disturbed us.