Distributing Films In The Internet Age: Interviews with Pivotshare and Fandor 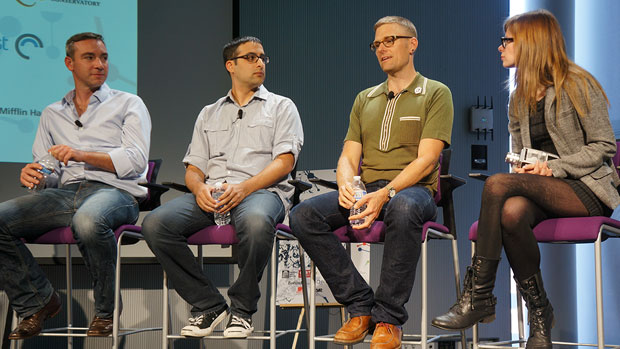 by Michael Murie
in Distribution, Festivals & Events, Filmmaking
on Oct 7, 2013

The Film, TV & Digital Session at the recent Hacking Arts event focused on film distribution, with panelists Richard Matson from Gathr Films, Adam Mosam from Pivotshare and Albert Reinhardt from Fandor. The panel was moderated by Elle Schneider of Digital Bolex.

All three firms are involved with distribution. Pivotshare offers tools to help the filmmaker sell their videos online. Fandor is an online subscription platform that pays its filmmakers a share of its subscription fees. Gathr Films provides an on-demand theatrical experience; a screening of a film can be requested at a local theater, and if enough people buy tickets, the screening happens.

The event was held at MIT and attendance skewed strongly towards students, so it probably shouldn’t be a surprise that when Pivotshare’s Mosam asked who had a cable subscription, less than a third of the audience of about 400 put up their hands. More significant was that when asked “who buys DVDs on a regular basis?” only two people in the entire audience raised their hands.

Mosam observed that there are some disturbing trends facing the industry. “While filmmakers want everything at 4K, I was on a panel with a guy from Google, and they’re working on every device possible. What it’s really doing is taking the acceptable quality down. It also means that in the future the experience becomes all about context and personalization.” 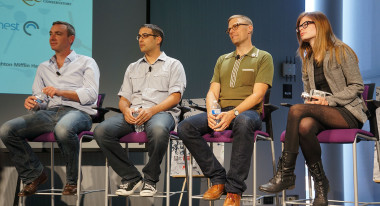 Asked whether they feel any pressure from ISPs or the studios, Fandor’s Reinhardt said that they had felt no pressure from the large studios, who probably don’t see them as a competitor. Of the ISPS he went on to say that “they haven’t directly challenged the data we’re pushing through [the networks], but we do face issues with performance.” Both Pivotshare and Fandor have to work on getting their traffic routed as efficiently as possible to minimize the hops between stations, something that larger services like Netflix have spent years optimizing.

In talking about movie distribution, Gathr’s Matson said, “You need to have an understanding of the space and how movies make money, because even if your motivation isn’t to do so, you need to understand what everyone else’s is.” Matson went on to say, “The more niche your movie, the easier it is to market,” but he’s clearly uncomfortable with that statement, as he goes on to add, “that worries me because I’ve handled lots of issue-oriented things, and you can get your core audience behind that, but how valuable is it? I want people outside of that niche to be coming and experiencing movies because those are the ones that are most likely to be affected by them.”

We spoke to both Albert Rienhardt of Fandor and Adam Mosam of Pivotshare about their online services:

Filmmaker: What is Fandor?

Reinhardt: We have an echo system where all these filmmakers can have their films together. It’s a subscription service, and we have layers of curation and recommendation built up so that we can lead subscribers from one film to another.

Filmmaker: How is it different from, say, YouTube or Pivotshare?

Reinhardt: We have a closed echo system; not everyone can upload to it, and we make choices about what’s in the library. We have a revenue share with our filmmakers so that they can get direct compensation from the monthly subscription revenue and put it towards paying off their old credit card bills or starting a new film! 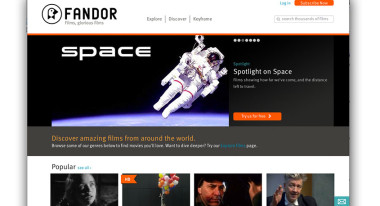 Filmmaker: What kinds of films are you looking for?

Reinhardt: We’re looking for a wide variety from people who aren’t completely unseasoned. They’ve been in festivals or they have tried to get their films into festivals, so they have some sense of what the world is like and, as Richard was saying, they know a little bit about what the framework for this distribution is and they’re open for having us as another means of distributing their film. They’re not expecting an upfront payment for it and they’re not necessarily bound by some exclusive contract. And if they’ve done carve-outs, or not signed with other people, and they have worldwide rights, then we can look towards the future and bring it to a global audience, not just U.S. and Canada.

Filmmaker: How does a filmmaker get on Fandor?

Reinhardt: It’s curated; submit a DVD or a hard drive and we take that and we do all the prep and then there’s a 50-50 revenue share.

Filmmaker: What sort of analytics do you provide?

Reinhardt: We have a lot of data, but primarily we’re giving breakdowns on seconds per film viewed, and we do some territory information so that filmmakers have a sense of how there individual titles are performing by state. 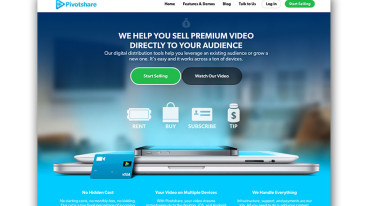 Filmmaker: Where does Pivotshare fit into the market?

Mosam: In the whole value chain you have the content itself, you have distribution, and then you have marketing. With us, you’re selling, renting or subscribing content, and the filmmaker gets 70%. The difference between what we do and what Fandor does is that they provide marketing; they’re bringing you an audience. With our platform, we’re empowering you to distribute to your audience.

Everybody is trying to figure out; what services do I need? Do I have a social following that is actually substantial enough to make money? Or is it just going to be a blip on the radar? And the answer everyone is coming to is, “My film should be everywhere, at different times.”

If you’re going to do a VOD-only play, your film needs to be on iTunes, on GooglePlay, on Amazon, and wherever else you can put it. What’s the difference? Everyone will do distribution; they’ll all get your bits from A to B. The perceived benefit of iTunes is the large audience.

What we tell filmmakers is put it on us, and put it everywhere else as well. You’re going to make the most money with us, but if somebody finds your film through iTunes and buys it, then iTunes has earned their percentage. Amazon will charge 50%, but Amazon has earned that if they have brought you the customer; you’re paying marketing.

If you have a website for your film, you should use us to power your site.

But still the biggest challenge for filmmakers is building an audience and rallying the community depending on the type of film it is.

Filmmaker: So you’re more the playback and payment mechanism?

Mosam: Sure, the infrastructure layer for serving your content, accepting payment, seeing the analytics.

If you don’t have a site, we will automatically generate one for you — you don’t need to have any technical knowledge. If you have a site, you can embed a Pivotshare embeddable player on your site.

The main message to filmmakers is there’s more to life in the future than iTunes, Netflix and YouTube.

Filmmaker: What sort of analytics do you provide?

Mosam: As with many of us, it’s evolving. We start with the website analytics side; where is your business coming from? How long are they on the site for? How many views, bounce rate etc.? It’s what you’d typically find in a Google analytics package, and then we move on to the income analytics: how many people pay per view, rent it or bought it? Who are they? You can export a customer list, names, email etc., all the way down to the media-level analytics. It will tell you viewership by device, how many plays on web, iPhone, etc., the drop off or when they stopped watching, all the way down to total income.