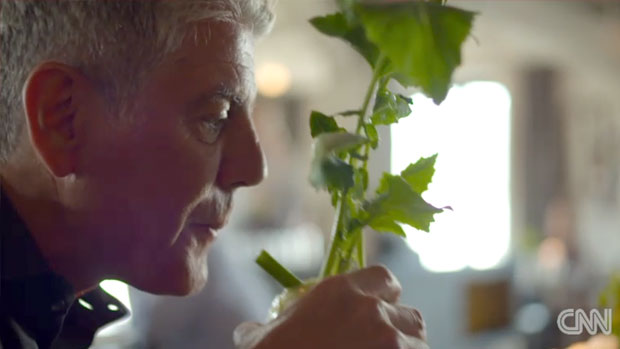 Zach Zamboni, a cinematographer on Anthony Bourdain’s series Parts Unknown, recently spoke about his philosophy of shooting and being creative at an event in Boston. Particularly intriguing was his description of shooting an episode using just two prime lenses and his interest in shooting with Super 16 lenses on the Sony F55.

About cameras, Zamboni said that he doesn’t believe one camera is “right or wrong” for a job. “The choice of camera will inform the lenses I’m going to put on that camera,” he remarked. “Those lenses will inform my behavior with that camera, and that will start to inform my behavior around the subject. The subjects behavior will in turn influence back on me and you have this really weird loop of subject, machine, operator.” He went on to say “I am actually more concerned about the proscenium, the frame, and how all those lens options give me options in the way I frame something.”

Zamboni explained that Bourdain believes that “No past show should be a guide for the next one,” and that this attitude allowed them to try shooting the episode on Copenhagen with just two primes. “That was risky for me, but that kind of risk creates solutions to problems. Creating problems for yourself by only giving yourself one lens forces you to find creative solutions. I think that show is one of the greatest shows we’ve ever done. The way we shot it created a new set of possibilities for the editor.”

Bourdain said of the episode, “Cinematographers Zach Zamboni and Alan Jacobsen did amazing work. The show looks like nothing we’ve ever done before.”

We spoke to Zamboni after the event about shooting the Copenhagen episode and his mention of hoping to use Super 16 lenses with the F55. 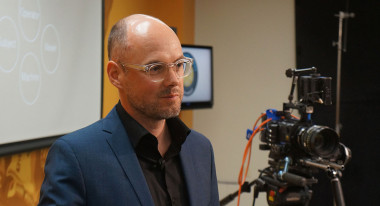 Filmmaker: For the Copenhagan episode, what were the two primes you used?

Filmmaker: Why did you choose those?

Zamboni: When you start working out how to shoot, especially people sitting down at a table, there’s that certain frame size that you want to be in. You need a flexible enough lens that you can cover say, a chest-up close-up, back up to a two shot, or if they hop up from the table you can follow them out the door and still see enough of the world around them.

Filmmaker: If I’d had a guess I’d of thought you’d have a wide and a long lens.

Zamboni: Well no, because with a 25mm and a 35mm you can trade off with each other. Also, if you start getting too wide, if the other guy is on a close up you’re going to be in the other guy’s frame, so a 25 and 35 is a good mix where you can be just outside somebody’s frame and the other camera can still do some work.

Filmmaker: How do you think the results changed from what you would have got if you had used zooms?

Zamboni: [The primes] change everything because you have to marry your coverage with some constant concepts. I was also willing to let go of what I consider to be good framing. That was the hardest thing for me, giving up on the thirds and nice, pretty classic compositions. Trying to step back and get away from that is mentally difficult because you have to relearn things a little bit; you have to relearn another way of imagining what a good frame is.

I think if we did it again, we could go even wider. Strange things happen when you try to cover close-ups and everything else in a wide lens; you really have to be in the people’s space, and it brings the viewer right in. 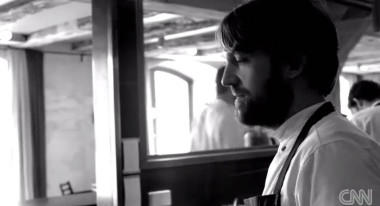 From the Parts Unknown Copenhagen episode

Zamboni: It won’t cover the 4K sensor, but we’ll be windowing it. You’ll be able to get a 1080 image, you’ll be able to shoot hi-def images on that camera. Because it has a 4K sensor you’re able to window it down, that’s what I’m told by the engineers, and get a hi-def [image] from a smaller area of the sensor.

Filmmaker: But you haven’t done that yet?

Filmmaker: Why do you want to do that?

Zamboni: Because if you look at all the documentaries that were shot on Super 16, and if you look at something like the Hurt Locker, there is kind of an atmosphere and a mood that is created with those lenses. But also on the practical end you can pack a longer zoom range into a smaller lens and that’s what I think a lot of people miss about being on Super 35. On Super 16 you can pack the 35mm equivalent of a 20mm to 150mm into a space that you’d normally be putting in 35 something like 19 to 90. By doubling that zoom range you get a lot more options; you can get closer and further in the same lens.

You can view a recording of Zamboni’s talk here: