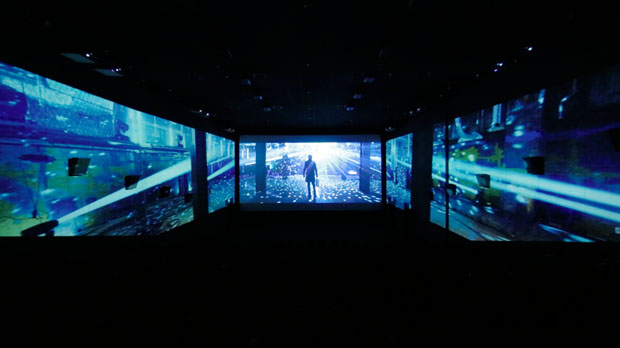 Filmmaker: What are the limitations?

Kim: The limitations right now, and I’m strictly talking about feature films, are the theater. There seems to be a theater size that works much better. On the production side, just to give you an example of where the problems are, normally you have your lighting set, you are lighting the actors, but you are now working with 270 degrees of visual field and so you can’t just put the lights anywhere. We were hanging the lights, or we had the lights very low, trying to get outside the cameras field of view. There was one point where 30 crew members were standing behind the camera in a Congo line, so they wouldn’t be in shot. Things like that are limitations.

Filmmaker: Is there anyway of changing the shape of cinemas, have you experimented with that?

Kim: I don’t think we need to change the way a theater looks. I think for us, it’s always going to be about the walls itself.

Filmmaker: Are there certain fabrics that work better?

Kim: Yes. We wouldn’t say it’s a fabric, it’s more of like a sound proofing element that we use here at CGV quite often. It’s called Tectum, and it’s actually a sound-proofing element which is why you kind of get squiggly lines all over the walls and that is all we need. You can go with any fabric, go with Tectum, any surface as long as the color works well and it’s flat.

Filmmaker: Do you imagine taking The X to other film festivals?

Kim: We have already started getting requests and the only issue is that this isn’t something where we can just take the hard drive and play it. We really need to look at the theater where it’s going to be played, how do we make sure that it’s going to be played properly, how do we temporarily fix the theater; those are issues we have to deal with. Projectors, we can just rent there, it’s not a special projector. There are specific projectors we like to use, so as long as they carry those projectors.

Filmmaker: How much did The X cost to make?

Kim: Commercials is a completely different department. I lead the film department. We work together and help each other out. My goal right now is to get a feature film made.

Filmmaker: Do you go with a big name director or will the technology sell itself?

Kim: We don’t have to [have a big name], the technology will sell itself. Think about a horror film, you can have all these bugs that will be crawling up the wall. That’s an experience in itself, you can distract an audience by having them watch this screen in front and then when they think it’s safe, boom, something pops up at the side.

Filmmaker: Are you working on seats that swivel or anything to complement looking to the different screens?

Kim: No, the seats are always going to be the same. Once we start talking about the seats you are talking about a tremendous cost. The great thing about Screen X is that it is fast, it is quick.

Filmmaker: Do you imagine there will be a mark-up in price to watch Screen X?

Kim: That is something we are trying to work out right now. We are not sure if it’s the right way to go, but at the same time, it seems like the logical way to go. There is [also] the issue with the guys sitting right up the front, can you charge them extra?

Filmmaker: In this screening [of The X], people sitting in the sweet spot were happier than those at the side. But I guess you could say that is the same with IMAX.

Filmmaker: Obviously it’s very new, 3D with glasses have been going on for many years. The first systems were in the 1950s and we are still complaining about the technology! How long before you hit something that you are going to be happy with?

Kim: Well, at this breakneck speed, realistically speaking I would say 2015. It will probably coincide with our first feature film. We are not going to release a film until then and if we really are going to charge extra for it, we want to make sure that it’s really something that people are willing to pay for.

Filmmaker: That is the thing with The X, it’s the experience rather than the story that is what’s most interesting.

Filmmaker: At the moment, what is sweet spot range?

Kim: There were some people who watched it [at our first Busan screening] and came back and watched it again at the next screening. The first time they were sitting towards the front and the second time towards the back and we had a chance to talk with them. They were saying that basically it was a really different experience and they are not sure what they liked better. We like to designate the sweet spot as middle rear; you get that immersive effect and you also get to see all the content. Some people they like to be up front, because they want to be constantly surrounded by images, some people like to sit way back because now they get to see everything, they get to take it all in. Sides are a bit of an issue, admittedly, some people when they sit on the side you get to see this stretch effect, it’s a huge long screen, it’s a different experience I think.

Filmmaker: What size is the ideal screen then?