A Dream Made Real: Magical Cinema at the Empire Drive-In 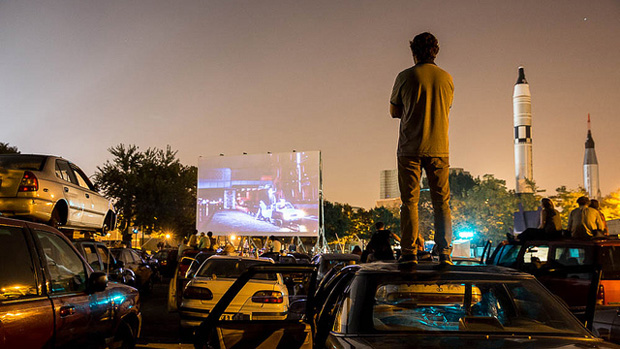 by Braden King
in Distribution, Filmmaking
on Oct 17, 2013

This past Sunday, artists Todd Chandler and Jeff Stark gave me the honor of curating an evening of live cinema at their month-long experiential installation Empire Drive-In at the New York Hall of Science in Flushing Meadows Park, Queens. Composer Michael Krassner and Boxhead Ensemble accompanied Artavazd Pelechian’s experimental masterpiece Our Century, which was preceded by Kelly Sears’ absolutely stunning short, The Drift and additional shorts and music.

We were excited to take part in the series but none of us were fully prepared for the amazing experience that Todd, Jeff and their collaborators have created in the shadow of the Hall of Science’s decommissioned rockets. Here’s a brief description from the project’s website:

Empire Drive-In is a full-scale theater made out of wrecked cars and a 40-foot screen constructed of salvaged wood. Audiences climb in and out of cars rescued from the junkyard to watch films projected on the big screen. Low-power radio transmits stereo audio directly to each car… The films and performances programmed reflect the themes of the overall project, and every element, from the glowing marquee to the personal items left in the salvaged cars, offers an opportunity to re-examine mass entertainment, easy nostalgia, and why we still want to experience the spectacle of cinema together.

These artists have created an inhabitable meditation on cinema, community and reality itself. I can’t put it more plainly: If you’re close enough to get there, do not miss the final days of this amazing experience. The final screenings and events take place this Wednesday through Sunday and include additional live cinema events, a performance from the NYC Bike Ballet, and an interactive space adventure. It’s magically subversive; a dream made real. Go.

I had to know where this all came from. Todd and Jeff generously took the time to answer a few questions.

King: What led you to the creation of this piece and this program?

Chandler and Stark: Empire Drive-In was first built in 2010 as part of the 01SJ Biennial, which is an art and technology festival in San Jose, California. We built it to show an early assembly of footage from my film, Flood Tide, which is about a group of people who make boats and rafts and pilot them down a river. We wanted to create a theater that felt special, a theater built out of used and recycled materials, which had a deliberate echo of the boats in the film.

King: One of the things I found the most magical about Empire Drive-In was the ways in which it tore holes in “reality” for me. It felt like a dream made real. Was this kind of experience part of the project’s intent? How does that relate to your body of work?

Chandler and Stark: I’m drawn to places on the margins, from the Canadian prairies to small mill towns along the Hudson River. I’m interested in the stories of those places and how to bring them to life. I also love the temporary community that’s created in a movie theater: we sit together in a dark room, without talking, and have an experience together, taking our cues from the screen. I’m interested in what happens when we take our cues from the film, but also from the environment, from live performers, from each other. What happens when we extend that experience beyond the screen to the screening environment itself? Live scores are one way to do this, but installation, and site-specific events feel like natural extensions of film as well.

Jeff’s work is almost always site-responsive or site-specific, and he often uses place — empty factories, tunnels, abandoned theaters — as a way to transport audiences. Most of the big, collaborative projects that he and I have been involved in — the Miss Rockaway Armada, Swimming Cities, and now, Empire Drive-In — are cinematic. They’re spectacles. They’re visually striking. The connection to film is clear: Film creates alternate realities in a way that feels fleeting. 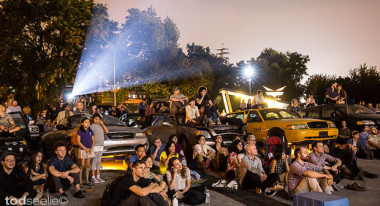 Empire Drive-In isn’t seamless: It’s dirty, it’s built from junk; it’s always on the verge of falling apart. People can tell that it’s all built by hand. Everything is real, but it’s all a little off. The cars are missing doors and wheels and windshields. They’re stacked on top of each other. The space is lit and everything is slightly aglow. The radios work. You get to touch the “art” and really interact with it and become part of a kind of temporary community that’s more than an audience. There are unspoken rules and people learn by watching each other and talking. You can climb on top of cars. You can move from car to car and sit with strangers. And the experience is transportive and a little transgressive. That slight tear in the fabric of reality somehow fills the space with a sense of possibility for the audience, performers, and for us as artists too.

King: What surprised you the most during Empire‘s run? What have you learned?

Chandler and Stark: The thing that really caught us off guard, back when we built the first drive-in in San Jose, is that cars are such personal spaces. We had imagined that they would basically be interesting-looking husks. But cars don’t always end up in a junkyard by plan, and we noticed immediately that most of them were filled with pieces of daily life. There were receipts for tires and packets of soy sauce. But also journals and love letters and pictures from a Sadie Hawkins dance. There was one BMW that had a full bag of groceries in the trunk. The objects are mostly worthless, but when you add them up there are all of these stories, and we think it’s important to preserve those stories, if only for the length of the drive-in.

King: What are the most indelible images and moments from the project’s run?

Chandler and Stark: One of the best things about being an artist or a filmmaker is that you get to dream up images and make them real. We sat around a kitchen table with Greg Saunier (Deerhoof) and talked ourselves into an idea where he’d write music for an orchestra of Casio keyboards and play percussion on the undercarriage of a wrecked car. We were all laughing out loud. To see it actually happen, with Charlie Chaplin flickering above him, and actually hear what he’d written — this kind of accidental score, with all of its silly synchronicities — was one of those moments where you feel like art can just be so big, and that your collaborators and your audiences can explode your plans in ways that dwarf your original ideas.

Teenage Wasteland was also an extraordinary night. The whole place was packed. The first cars are about 60 feet from the screen, but when RVIVR took the stage during intermission almost everyone ran right up to the front and danced and sang along. And then when the band finished, people went back to their cars to eat popcorn and make out and finish cans of beer.

Your program, The Space Race, was another magical moment. We emailed you for program ideas and you responded immediately. But when you showed up last Sunday with Boxhead Ensemble, a group of musicians for whom we have so much respect, we were a little nervous. You know, we’re not really a proper venue, with a green room and drink tickets, or, you know, heat. The stage is built out of old scaffolding planks and you’re looking out at a bunch of junked cars in a parking lot. But every one of you instantly got it and were walking around the space, smiling, checking out all of the details. We try to explain Empire to people, and why they’re going to love performing or programming there. But it’s not until they walk on site that they really understand it. Watching other artists get excited about the space is always really gratifying.

Additional information and the full program can be found on the project’s website.