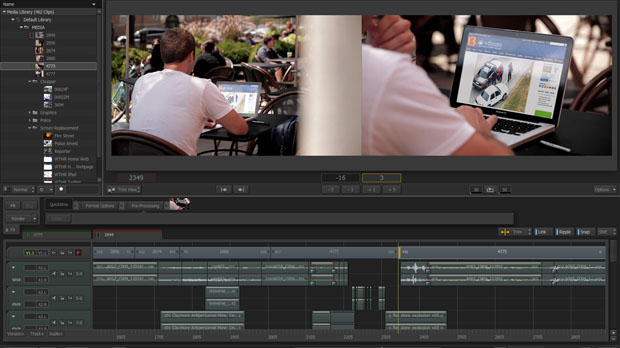 Once life was simple. NLEs were NLEs. They did offline editing of conspicuously compressed picture with unmixed audio tracks and limited titling.

Maybe it started with the MiniDV revolution 15 years ago, but over time low-end NLEs competed with high-end NLEs in tools and feature sets, becoming today’s desktop online systems and sealing the fate of many midlevel post facilities.

Yet when FCP X debuted two years ago, feature-rich as ever, only Motion and Compressor were left standing. Gone were Color, SoundTrack Pro, LiveType and DVD Studio Pro, all folded into FCP X. Gone, too, was “studio” as an organizing principle.

Whew! That much less “round-tripping” of clips across discrete applications.

Which, to my mind, always triggers the thought: why not a true all-in-one?

Would Adobe Dynamic Link or Bridge be necessary if Prelude, Premiere Pro, Audition, After Effects, SpeedGrade, Media Encoder, Encore, even Photoshop, were combined?

Back when life was simple and NLEs were NLEs, nothing said “big iron” finishing system like DaVinci for color correction and Autodesk Smoke and Flame for compositing and online. Or, as seen through the eyes of post facilities, capital expenditures in the high six figures, dedicated rooms, highly paid specialized operators, costly annual support contracts and engineering staff, which necessitated hourly rates in the hundreds if not thousands of dollars.

We all know what happened to DaVinci. In 2009 Blackmagic Design purchased the ailing company. The big iron hardware evaporated. The surviving DaVinci Resolve software is now a free download for Mac and Windows, at least up to HD resolution. It’s massively popular. A full $995 version adds 4K capability and beyond.

However, in the latest version 10 of the free DaVinci Resolve Lite, an interesting evolution occurs. The former Conform page has been renamed Edit for its timeline and standard three-point editing, including slip, slide, roll and ripple edits. There is a text generator, an optical flow function for slo-mo and hover scrubbing for previewing Library clips. Resolve’s dark background resembles FCP X, with Library in the upper left and Inspector in the upper right above the timeline.

How is this not an NLE in the making?

Whatever the case, it’s fair to say that with this year’s release of Smoke 2013 for Mac, Autodesk has gotten there first.

Smoke originated a decade ago as Linux-based editing software ($68,000 with an IBM workstation) designed to integrate with and facilitate Autodesk’s Flame, the industry’s premier visual effects software. Since visual effects are frame- and clip-based, CGI software is typically not equipped to manage longer sequences, which comes easily to NLEs.

In a node-based workflow, image composites are created by connecting modular “effects nodes,” resulting in a branching chain of nodes that graphically depicts sequence, hierarchy and grouping of effects. If you join 20 effects on one clip and decide to alter any one of them, the others are not affected. In contrast, when stacking complex video effects on an NLE timeline (“layering”), things can get tricky when you try to change one of the buried effects tracks.

What Autodesk has achieved in Smoke 2013 for Mac is a hybrid of layered NLE and powerful node-based effects, all available — and this is key — from its timeline. In other words, no round-tripping to external apps for secondary color correction, complex motion graphics, compositing of any sort. Select a clip on the timeline and go to work. As you edit a long-form program.

Imagine a mash-up of FCP X, Motion and Compressor, with Flame-like effects. Or all of Adobe CS-whatever fused together. Now imagine you can select a familiar FCP 7 keyboard layout before you begin a project. JKL keys that work as expected.

It’s probably no coincidence that from a distance, Smoke 2013’s timeline and GUI can resemble Adobe Premiere Pro’s. (Smoke’s track colors are duskier.) Adobe has experienced a windfall from Apple in the form of disaffected FCP 7 users flocking away from FCP X. The timing of Smoke 2013’s introduction, likewise, is probably also no coincidence.

Autodesk announced its first Mac-based version of Smoke in 2009 with the advent of 64-bit Mac OS 10.6 (Snow Leopard). The price was $15,000. The new Smoke 2013 is deeply revamped to emphasize its capabilities as a standard NLE. As a result, any experienced editor ought to be able to start cutting almost immediately using familiar tools.

Significantly, Autodesk dropped the price of Smoke 2013 for Mac to $3,495. (With a 20 percent discount until the end of October, if tempted.) As with FCP X, you can download a full version for a free 30-day trial, no strings attached (highly recommended). What’s more, you can explore the superb Smoke Learning Channel on YouTube to get a better idea of Smoke’s myriad techniques, plus its look and feel.

You’ll discover that Smoke 2013 has, in fact, four tabbed interfaces: MediaHub, Conform, Timeline and Tools. It can import projects from other NLEs via AAF (Avid), XML (FCP 7 and X) and old-fashioned EDLs. It can also export timelines in just about any codec, including all flavors of ProRes, AVC-Intra, DNxHD, etc.

But the minute you start Smoke 2013, you’ll know you’re not in Kansas anymore. The GUI, pleasingly elegant, reveals its Linux roots at times (not always Mac-like). You’ll experience its origins as a high-end finishing system in many corners. To set up a volume for a project on a new disk, you must use a separate utility app. (Ironic, huh?) Smoke tells you not how much capacity in GBs you have on a selected disk, but “frames free.” For instance, setting up a 1920 x 1080 project on a 2TB RAID with 1.6TB available, I’m told I have “Frames Free 266222.”

For NLE editors, node-based effects will take getting used to. And in contrast to FCP X, you’re back in the land of manually rendered effects and transitions. Whether Smoke’s timeline is as good an impromptu sketchpad as, say, FCP X’s timeline, remains to be seen.

More significantly, experienced Smoke editors uniformly cite its power and endless depth, which is another way of saying that its true learning curve is long, long, long. Prepare to invest time and attention as well as money.

But the time it takes to hunker down and explore Smoke will be offset by the time and frustration you save not having to learn interfaces and idiosyncrasies of multiple NLE and effects programs, or their round-trip strategies, which aren’t always smooth sailing. Smoke’s media management is rock solid, too.

This is not a review of Smoke 2013 for Mac. That would take a considerable word count, because Smoke 2013 is deep, deep, deep. Think of this instead as an appreciation of the example set by Smoke 2013, and what it might portend for the future of NLEs.