Shooting with 18 Cameras: The Making of The Short Game 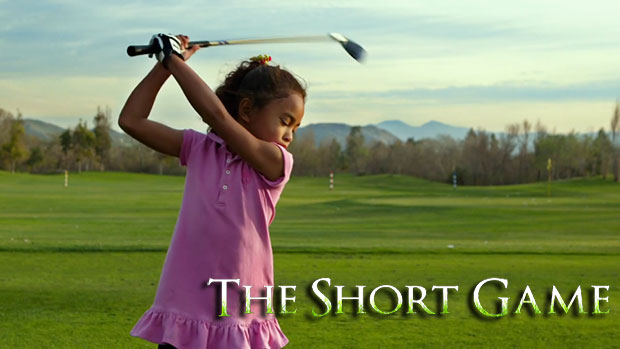 With a background in comedy shorts, you’d be forgiven if you thought Josh Greenbaum’s first feature, a documentary that follows the 7 and 8-year old competitors in the World Championships of Junior Golf, would be a dark look at another group of driven parents. But that’s not what Greenbaum was interested in doing. Instead, he focuses on the children, these pre-teens who can, at turns, appear tremendously adult, or just like any other 7-year old.

The Short Game follows eight competitors through last year’s championships, though production actually started a year before at the previous championships. That was where they scouted the children that they were going to follow. Then they spent a year dropping in on each of the children for a short period of time to gather background material. “The structure of the movie is in three acts,” explains Greenbaum. “The first act is the run up to the competition, the second act is the first round of the competition, while the last act is the final day.”

This meant that the majority of their shooting was over the week of the competition, which posed challenges in itself. “We thought about having it shot like the PGA,” says Greenbaum, with cameras and crews set up throughout the course. The filmmakers looked at the cost, but for a production like that, with over 70 cameras and crews, the costs were too prohibitive. Instead, they ended up using 18 crews, each armed with a Canon C300. The C300 provided good image quality in an easy to operate bundle.

“We used the camera stripped down,” said cinematographer JB Rutagarama, with, for the most part, no rigs. The lens choices were primarily the Canon 25-75 f/2.8 and the Canon 70-200mm f/2.8. Recording was in S-Log and to compact flash cards. They did use a Sony NEX-FS100 on a remote-controlled helicopter platform for some aerial shots.

With so many different cameramen coming in on the project for that final week, they had to hold a short clinic at the beginning of the week to get everyone up to speed on the style that had been used to shoot the existing footage. “For the most part, we’re shooting at the children’s level, not down at them,” says Greenbaum. He didn’t want the angle of the camera to provide any editorial perspective by shooting down or up at them. 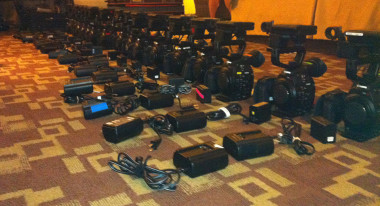 The cameras being prepped for shooting

For the championships, each child was followed by two camera crews. Said Greenbaum, explaining the difficult logistics of moving the cameras around, “You usually want the camera to be ahead of the game.” To accomplish this, one camera would be ahead of the player, with another behind them, and they would switch around as the kids moved through the course.

Shooting with so many cameras posed one other problem: once the shooting was completed the editor then had to work through the countless hours of material that were recorded.

For Rutagarama, the greatest challenge of the production was not the gear or the grueling schedule. The greatest difficulty was keeping his distance from the subject. After spending a week following around one competitor from France, he said he found himself having to work to remain apart from the subject. “You might want to provide encouragement to them, but you had to stay apart.”

When asked if there was anything different that he would do if he was doing a project like this again, Rutagarama said that he’d perhaps liked to have had more gear for the shoot — maybe a slider or a small crane — but nonetheless he was very happy with the results they achieved.