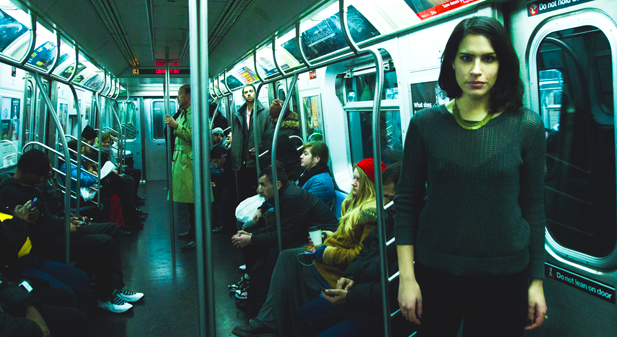 Mustard: I was sent Desiree’s project Appropriate Behavior through a mutual friend late last year. I receive many scripts in the low-budget range having produced this size film for over a decade, of which, 99% of them I pass on. However,  this particular project stuck with me in an unexpected way.  I was immediately drawn into the story by the original, smart and edgy writing. After I watched Desiree’s web series The Slope, it was clear that she was a fresh and unique voice that needed to be heard. Desiree’s writing (and subsequently her performance of a heightened version of herself) is raw, funny, flawed, entertaining and oh so honest!

I was thrilled to get behind the making of Appropriate Behavior and help bring this script to the screen. Having worked with Desiree over the last year, I can honestly testify to her talent as a writer/director/actor and force to be reckoned with. She truly embodies the spirit of independent filmmaking and I believe Appropriate Behavior to be an extraordinary achievement for a first time filmmaker in a microbudget category.

Mustard: There were a solid amount of women on set (much more than I see on higher budget films), however, I do not believe this was specific agenda or consideration given to women over men. I always hire the person that is best for the job, however I will say that a benefit of working in the micro budget space is that there are a larger number of female crew to choose from.

Mustard: Cecilia will speak to this as it his her company, Parkville, in UK that financed the picture. We did also apply for the NY State Tax Credit, and we were fortunate enough to not need these funds to finance production. Thus, the tax credit will be first money in to recoup financiers’ investments which is wonderful, and a strategic decision on our part for shooting the movie in NYC.

On this note, I think its important to address the reality of budgets in today’s market. There is a huge pressure to cut and reduce all around costs of filmmaking. Appropriate Behavior is the perfect example of a script that could be made for a small budget and retain a distinctive voice and high production value. In other words, we were not trying to squeeze a round peg into a square hole – a mistake I have seen many first time filmmakers make. More importantly, Desiree, Cecilia, myself and all the HODs that were hired were all on the same page with the funds we had available to achieve the vision of the script. As producers, we are only successful when we can make a return on an investment of a movie, and I believe Appropriate Behavior represents a model for success.

Filmmaker:  Tell me about the emotions of making this film.

Mustard: This is one of the first times I have been in a supervising role and I have to say, it’s pretty nice! Having been in the trenches dozens of times on low-budget films, I thoroughly enjoyed lending my expertise for the big-picture decisions and act as a catch-all for creative, legal, crew hires, scheduling, post, and soon, the sale of the film. Overall, the mood of the set was abnormally delightful for a microbudget / first-time film director. While, of course, there were tough days, for the most part, the atmosphere was fun and amiable. I think Desiree and our d.p., Chris Teague, can take a lot of credit for this; both of them are calm and professional, making the work environment pleasurable.

Filmmaker: There is a lot of male humor in this film (yes, I’m referring to the fart jokes). Do you think that is just your sensibility or was there some thinking toward a more gender neutral audience?  Who do you hope is your audience? Men or women?

Mustard: I think the audience will start small within a heavily female-based / liberal / coastal / modern viewership and quickly expand to encompass men, older adults and young teens across America. There is something completely engrossing in Desiree’s writing and performance that I think will cross platforms regardless of gender and sexuality.

Mustard: Overall, I do not feel being a female producer has impeded my trajectory in the film industry as a producer is a common route for the majority of women in film today. However, having said that, I have felt a prejudice as a female line producer which is a job that is a very tricky balance in keeping a stern eye towards the budget and a friendly smile towards the crew. Especially early in my career, I encountered fairly overt discrimination from certain male crew members who were older and “wiser” and would not take seriously the authority of a young female boss. If I was stern in a decision, some men disregarded this assertion of authority as spiteful or a “shrewish female personality.”  This was very tough to recognize and deal with, but luckily filmmaking is in constant motion. It is easy to keep moving forward when there are so many amazing and wonderful people with whom to collaborate.

Mustard: Whether you are a production coordinator or a director, I try to make a conscious effort to support, encourage, and elevate my female co-workers.

Mustard: I anticipate 2014 being a big year for me as both a producer and line producer. I have six films in postproduction that will all be hitting the market place in the first quarter. In addition, I am actively involved in three films set to shoot in 2014. I’m excited to continue to grow my existing relationships with some of my favorite filmmakers as well as looking forward to new collaborations.

Mustard: For this film – it would be good for Desiree to speak to being a writer/director/lead actress as its an extraordinary feat. Also, it would be good perhaps to discuss the budget restrictions, given this is microbudget, it’s always a small miracle to pull these productions off with high production value.