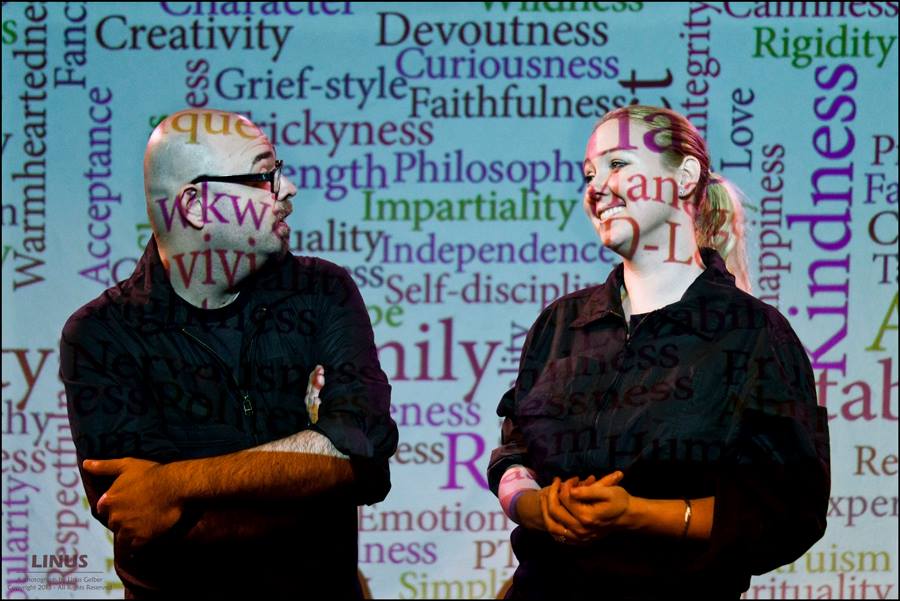 by Lauren Wissot
in Interviews, Transmedia
on Feb 10, 2014

Online dating takes an offline twist in FutureMate, the latest transmedia extravaganza to premiere at The Brick Theater in Williamsburg, Brooklyn. Created by Gyda Arber, Brian Fountain, David Gochfeld and Allen Hahn – all veteran artists whose work spans multiple platforms – FutureMate is set in a post-apocalyptic U.S. where fertile mates are at a premium. Fortunately, hosts Matt and Pam are there to guide audience members through the new and improved, meet-your-match system, which consists of phone-based speed dating and a “series of ice breakers.” (And for those not in NYC for the extended three-week, February run – which includes two Valentine’s Day performances – there’s always the FutureMate virtual world, which encompasses “futuremate.us (a government-run dating site), a two-minute commercial for the FutureMate system, gn0s1s.net (an anti-government manifesto), a guerilla-style anti-government print campaign” and, of course, “‘in-world’ twitter feeds”).

Filmmaker spoke with Arber prior to the show’s February 12th preview at 8PM at The Brick.

Filmmaker: Can you discuss the origin of FutureMate and how you went about developing the piece?

Arber: FutureMate was developed as part of the StoryCode/Film Society of Lincoln Center StoryHack in March of 2012. We did a 15-minute version of the piece there – and won! Which was very exciting. From there, a few of the members of our team really wanted to continue with the piece, so we have been working on expanding it to a full-length work.

Filmmaker: Could you present FutureMate simply as a theatrical event? How do the multiple platforms enhance the live experience?

Arber: The piece was conceived with multiple platforms in mind — video, phone date, website, etc. The video opening clues people in to the world, and lets the audience know the tone of what they’re in for. The phone speed date that happens in the middle helps us bring our audience members together — and we have a display that live matches folks in real time. I didn’t program it (credit goes to Brian Fountain and David Gochfeld) but I think it is very cool. I suppose we could solve those problems in more analog ways, but for a piece set in the future having technology working for us definitely helps. It also helps to underscore the themes of the piece — the trouble we have connecting with others in modern times, over-sharing, and the NSA surveillance state.

Arber: I’m thrilled. When I first started developing these works, there wasn’t a lot of other immersive theater happening, but in the past few years it seems like it’s now everywhere. It’s been thrilling to see other artists approaching this space — and seeing their work is definitely inspirational!

Filmmaker: What specific challenges do you see gamers, and perhaps filmmakers, facing when applying their skills to theatrical events? Conversely, are there obstacles for those professionals accustomed to live theater to overcome?

Arber: A live event is definitely not a game, and vice versa. It’s important to remember. However, one of the most interesting experiences I’ve witnessed was in a playable show in Game Play (festival at The Brick) called Brain Explode! Some of the audience/players tried to “win” the show — which resulted in a less than optimal result. The audience members with more experience going to the theater definitely got better results.

Filmmaker: So what other transmedia shows do you have in the works?

Arber: I’ve been approached by the fine folks at the Alaska Center for the Performing Arts in Anchorage to create an overnight piece specifically for them. I had a great trip out there last year, and we’re hoping it’ll happen in the summer of next year to coincide with Anchorage’s 100th-anniversary celebrations. There’s also been a bit of talk to produce Red Cloud Rising in San Francisco (my hometown), which would be super fun. I’m hoping to finish up Greetings from Coney Island in the next few months. I’d love to launch another mail-based project when that wraps up, and am in the early stages of a piece that I hope would last an entire weekend long, Friday night through Sunday morning, including lodging and food and everything. A theatrical transmedia mini-break! And of course, the Game Play festival returns to The Brick in July.