When Filmmakers Dream: A Story of Attainable Success 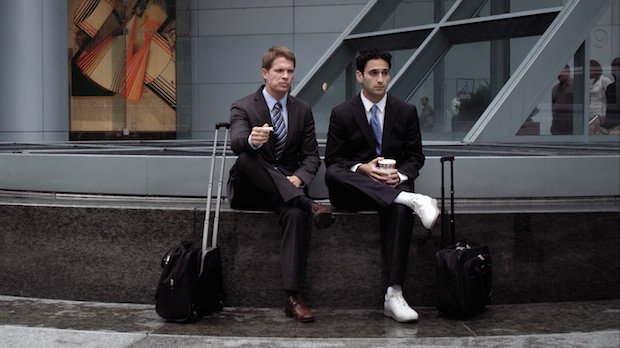 by Seth Fisher
in Distribution, Filmmaking
on Apr 17, 2014

When filmmakers dream, we dream big. And why not? Shoot for the stars, and hell, you might just get one to act in your next movie. While not every filmmaker has designs for commercial success, one would be hard-pressed to find one that would shun recognition and the opportunity to create more films and get paid to do so. Every young filmmaker would love his or her first film to win Sundance so they can be plucked out of obscurity, handed the keys to Hollywood, and asked to direct every episode of True Detective. And why the hell not?

When I set out to make my first feature, Blumenthal, I obsessively read up on every first-time feature filmmaking experience I could find. Naturally, most of the recorded accounts I could find were from the likes of Edward Burns, Stephen Soderburgh, and Robert Rodriguez. Of course, I now realize that those aren’t just success stories, they’re lightning caught in a bottle. But, for my first feature endeavor, success was initially defined through this prism. Though I wouldn’t have likely admitted it then, the potential fate of Blumenthal was either ‘lightning in a bottle’ or a crappy movie that I wouldn’t even want to finish editing.

Unfortunately, the extra baggage that comes with the suitcase of big dreams is the tendency to feel like anything short of that ‘dream’ scenario is a failure. You’re left believing that there is no gray area — either your film is Winter’s Bone or it’s a 60-minute walk-and-talk filmed on your iPhone that screened only once at the International Film Festival of Nowhere. No artist sets out to attain mediocrity.

But here’s the thing… there is a difference between mediocrity and middle ground.

Two weeks ago, Blumenthal reached its closing chapter of the filmmaking process: distribution. Now, the answers you really want to know: Did Blumenthal make a million dollars in the box office? No. Is it a critical darling? No. Am I famous? No. On the flip side, is the movie terrible? No. Did it bankrupt anyone? No. Did it see the light of day? YES. If someone told me that I would successfully raise $50,000 on Kickstarter, make a movie with my friends, premiere it in New York City, get it featured on iTunes and VOD, have it land me representation as a filmmaker, and land me my next jobs as a writer/director in TV and film… Well, let’s just say I would happily accept that middle ground.

We tend to only read about major indie success stories, or gripes from fledgling filmmakers who can’t seem to get a break. The success story of my first feature effort is a bit of both. The story isn’t glamorous, but I do believe it is a story worth sharing, and one worth sharing honestly. Blumenthal didn’t premiere at a “top-tier” festival. It wasn’t snatched up by Fox Searchlight, and it didn’t win a single award. Anywhere. If you’re like me, you’d probably assume this film wasn’t up to snuff if it couldn’t even win an award at a local niche festival. I mean, how hard is it to win an audience award somewhere?

When Blumenthal didn’t premiere at Sundance, Toronto, or SXSW, I’d be lying if I said I didn’t already feel like a failure. Many independent films never see the light of day, because the industry and indie-sphere tend not to champion films that premiere outside of these fests. Knowing that reality, it can be tough to rebound from rejection by these “gate keepers” to success.

After the first round of festival rejections, though, I took a moment to regroup. I actually spent that “moment” writing another movie. After that, I continued to edit Blumenthal, submit it to festivals, and began to share it with friends and friends-of-friends with industry contacts. And most importantly, I realized that I needed to redefine success for the film and for myself. At my core, what I really wanted was to make a good film. But what good is a film that no one sees? I decided that a premiere with a happy audience and a modest form of distribution would be enough for me to move on and not feel like I’d wasted time.

The Santa Barbara International Film Festival was the first festival that received the locked picture of Blumenthal … and the first to accept it. Success. Ish. Although SBIFF is a well-respected festival, it is not a realistic marketplace for indies to sell. The real success of our SBIFF premiere came in other forms — from the festival, we received our first review (happily, a good one!), which appeared on Indiewire. From there, a programmer for the San Francisco Jewish Film Festival programmed Blumenthal. After screening at this high profile festival for the Jewish niche, Blumenthal was subsequently invited to dozens of Jewish film festivals all over the world.

You’d think these middle-ground festival successes would be enough to have at least a few small distributors interested in releasing the film. Nope. More rejections. In fact, by this point I had a Hollywood agency behind me with an indie film sales department that couldn’t muster any interest from distributors.

Eventually, a distributor was sent the film by a few different parties who’d seen the film, all unbeknownst to each other. To my delight, the distributor liked the film and enthusiastically approached me about taking it on. Though primarily an aggregator for digital outlets, our distributor agreed to release the film theatrically in NYC for one week as well as throughout all VOD and SVOD platforms. The purpose of the theatrical release was to have a pretext for press with which we could bolster awareness of the film for the VOD run. It worked. As of today, we are a “New and Noteworthy” film on iTunes and the film is available in millions of homes via VOD.

Finally, success! An audience of strangers can watch the film, like it, hate it, or forget about it. That’s all that really ever mattered to me, I suppose. In the “about” section of my shooting diary, I posit: “Why make a movie? Because I love telling stories just as much as I love seeing and hearing them.” Everything else has been icing on the cake. Blumenthal will not make me rich. It may not make me anything at all. But people can see it. It got me in the door. It got me an agent. It led directly to my first script sales and my next directing projects. And it all happened without Sundance, without Fox Searchlight, without money, and without a single award.

So that is the story of the first-time filmmaker and his little movie that found their middle ground. I have a newfound perspective on the definition of success, an attainable success that I now attribute to Blumenthal.

Of the many lessons I’ve learned throughout this process, the most critical has been perseverance. Push your film through to the end. There are a million ways to get a movie out to the world and a range of what success can mean. Put everything into making your film, and twice that into getting it out there. Forget any idea of being handed the keys to the kingdom. If you can make a fucking movie, the kingdom is all yours.