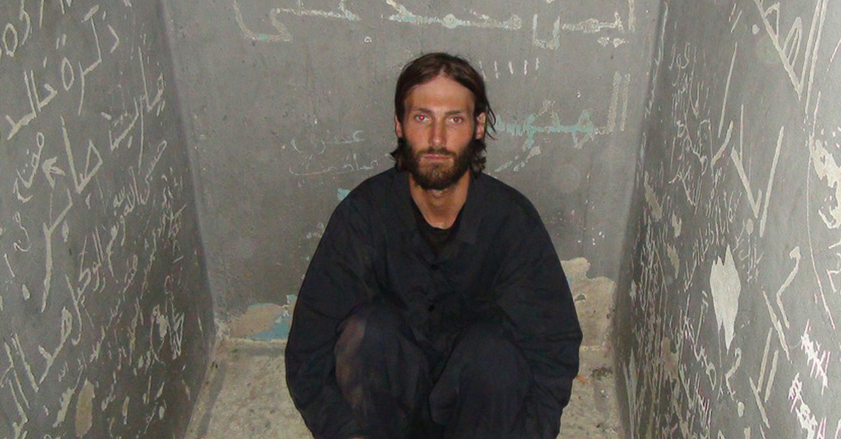 by Sarah Salovaara
in Directors, Filmmaking, Interviews
on Apr 23, 2014

A shy, sheltered, OCD-afflicted only child, Baltimore native Matthew VanDyke was not the likeliest member of the 2011 Libyan rebel militia, but Point and Shoot, the new documentary from Academy Award-nominee Marshall Curry, chalks VanDyke’s trajectory up to sheer sense of adventure.

Determined to give himself “a crash course in manhood,” VanDyke leaves Baltimore behind with a camera in hand, winding his way through Africa atop a motorcycle. Along the way, he meets Nuri, his iconoclast counterpoint who will draw him into the revolution.

Filmmaker spoke to Curry about relating someone else’s footage, and the documentarian’s dilemma of capturing the moment truthfully and artfully. Point and Shoot screens tonight at the Tribeca Film Festival, following its world premiere last Saturday.

Filmmaker: When and how did you get involved with relating Matthew’s story?

Marshall Curry: I got an email one day from Matthew saying he had seen my work (Street Fight, Racing Dreams, If a Tree Falls: A Story of the Earth Liberation). He explained that he had recently returned from Libya where he’d gone to help rebels overthrow Gaddafi and that he had hundreds of hours of footage from his experience and from a multi-year motorcycle trip that led up to it. He came to New York and met with my producing partner (Elizabeth Martin) and me and shared his story. Elizabeth and I thought it was an amazing tale, rich with questions about adventure, idealism, transformation, and the way we craft ourselves. We talked about it for days. And the reason I make documentaries is to generate those kinds of discussions. So we decided to try to simply replicate the experience we had just had, of sitting down with a fascinating stranger — like on a bus, or in a bar — and hearing his story (which happens to be illustrated with intimate and powerful footage). So a few months later, I went to Baltimore and did the first two day interview which makes up the spine of the film.

Filmmaker: I’m always curious when a documentary subject is responsible for shooting the majority of the footage, why he/she decides they need an outside perspective to make what begins as their film. Did Matthew have any creative input? Did he feel he was too deeply inside his experience to investigate it in retrospect?

Curry: I think Matt reached out to me for two reasons. First, he wanted to focus on the growing war in Syria and a number of projects he was doing to support the rebels there. Also, I think it’s really hard to make a feature length doc, and he understood that. When Matt first reached out to me, I explained that I only work on films where I have complete, creative independence and control, and he agreed to that. He had creative input in that he shot most of the footage and was the person telling his story. (I edited down the cut from about 25 hours of interviews.) He also saw cuts along the way and gave helpful feedback. There were some things he would have done differently if he were directing the film but ultimately I had complete independence in making the film.

Filmmaker: At the beginning of his travels, and upon his return to Libya, Matthew is well-intentioned, but, I feel, very naive about his surroundings. Were you concerned with how his wide-eyed sense of adventure could appear to an audience, or did you feel it played into his personal arc?

Curry: That naïveté from his early years, and Matt’s willingness to talk about it so openly, was a big part of what interested me in his story in the beginning. I really appreciated the way he shared his fears and mistakes and vulnerabilities with me — and ultimately with the audience.  And that is what makes it a more universal story with human complexity, rather than a comic book account of a two-dimensional person.

Filmmaker: The film unusually focuses on the role of the camera, how its positioning and presence distinctly prey on Matthew’s conscience as a filmmaker and fighter. Can you easily relate to the torment of this dichotomy — capturing pivotal action at an arm’s distance?

Curry: Yes — I find it very challenging to balance the requirements of filming someone (thinking about framing and light and focus) and at the same time being genuinely present in a moment. It’s something that every documentary filmmaker has to wrestle with, so it makes sense that Matt would have to struggle with it as well in the extreme environments he was in. More universally, with the ubiquity of Facebook and Twitter and Instagram, it has become something that most everyone — not just filmmakers — wrestle with. You are at a party or a beautiful park: are you taking a picture of it for Facebook or thinking of a clever tweet? Or are you simply enjoying — present in — the moment? It’s a question asked throughout the film — of Matt, of the soldiers in Iraq and Libya, etc.

Filmmaker: It’s surprising how readily Matthew is welcomed into the rebel forces. Did you have any insight into why this was? Of course, he proves himself after capture, but his motives are not shown to be questioned at the start.

Curry: Early on, he was vouched in by Nuri, his friend who he was joining. And the small group of rebels whom he was fighting with trusted him because of that. But Matt and Nuri were not sure at the beginning whether he would be accepted widely. That is shown in the scene early in the film when he is in the truck with his head down while Nuri and the others are getting paperwork to allow them to collect weapons. After prison however, as you point out, he had proven himself and was able to openly serve in the rebel forces.