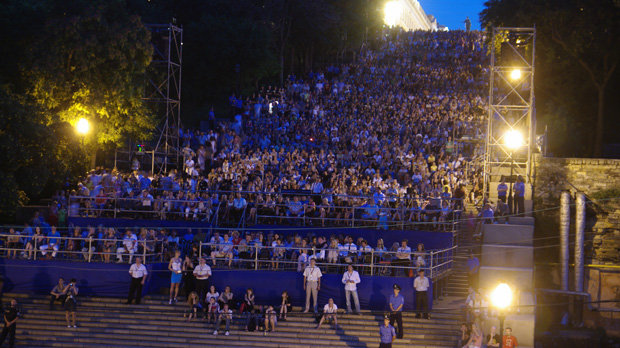 It’s never easy to pull off a successful film festival, but current conditions in Ukraine have made it nearly impossible. Five years ago, when organizers initiated an annual summer event in Odessa, the Ukrainian film industry was developing and the first festival rather small. But the Odessa International Film Festival grew quickly, reportedly beyond its organizers’ expectations, and began to receive the attention of the international film community, particularly in Europe. Now the Potemkin steps made immortal by Eisenstein are the site of outdoor screenings of classic films like (of course) Battleship Potemkin and the in-competition feature films have swollen by 140%, besides other events, screenings, and industry deal-making. The film industry’s infrastructure developed along with the festival; although the fest can’t be given exclusive credit for this — funding, training, and distribution networks have all played a part — OIFF does seem like a clear case of film production following cinematic culture and awareness. The festival has helped give Ukrainian filmmakers a place to gather, foster awareness of Ukrainian film, and catalyze production.

All that came to a crashing halt this year with the ouster of President Yanukovych, the subsequent political fallout, and the crisis with Russia in Crimea, just a stone’s throw across the Black Sea from Odessa. Government finances froze up, depleting the festival of its primary source of funds, and many private investors have either lost the ability or the desire to contribute during this volatile period. International organizations are attempting to help make up the difference both in cash and kind, but festival organizers have turned to Indiegogo to make up the large difference in operating expenses that will make this year’s not only a success but even just a reality.

The crowdfunding campaign represents a way in which the broader international film community, including those without deep pockets, can contribute to help make the festival happen. Whichever side of the political debate you support, we should be able to agree that the films that come out of Ukraine in the next two years will be historic just for the political milieu in which they were made.

I talked very briefly with OIFF executive producer Julia Sinkevich about the state of the festival and its specific goals with the Indiegogo campaign and this summer’s event.

Filmmaker: With everything that’s going on, how would you describe the state of the Ukrainian film industry right now?

Sinkevich: For the past couple of years the Ukrainian film industry has achieved a lot. We have finally boosted the development of a new Ukrainian cinema. For instance, in 2012 when OIFF introduced the National Competition, we received only about ten applications. This last year the amount of Ukrainian film entries was up to 150. During four years the Odessa Film Festival was attended by over 300,000 viewers and 3,000 professionals from 40 countries, and over 400 movies were screened.

The works of our participants — Oleg Sentsov, Danila Kozlovsky, Jack Reynor, Volodymyr Tykhyy — attracted the attention of international producers, agents and personnel from international film festivals. The chain reaction that followed the festival is that more and more movies are being filmed in Ukraine. Now the process has been put on hold. It’s very important to continue international cooperation and to encourage young talented Ukrainian filmmakers, who are left without state support, as well as to finish projects that were started in 2013. The funding is the main concern now because of the current situation in the country.

Filmmaker: What are the specific challenges facing the Odessa International Film Festival this year?

Sinkevich: Recent political events in Ukraine have caused severe economical crisis. The new government has initiated budget cuts, and these strict measures influenced the organization of the Odessa Film Festival because it lost state funding. In addition, the majority of private sponsors had to stop cooperation with the festival. And all that happened just before the festival’s anniversary, the fifth edition, let alone the fact that it’s already hard enough to organize an international cultural event in a state of cold war with Russia.

Filmmaker: So what’s the best possible scenario for the festival this year? What do you ultimately hope to accomplish?

Sinkevich: The festival is going to take place against all odds and we will do our best to make that happen. Now our main goal is to maintain the high level of the lineup and hold the National Competition in order to support young Ukrainian cinema.

The international film community has already shown its solidarity with the festivals in Ukraine. Heads of more than 120 film festivals–including those of Cannes, Berlin, Venice and Warsaw–have signed a letter of appeal asking directors, producers, and sales agents to give films for free to all film festivals in Ukraine and support travel of the guest filmmakers.

Moreover, last month we launched a crowdfunding campaign at Indiegogo to raise money. It will be used to cover technical equipment, accommodations, venues, and other organizational expenses.