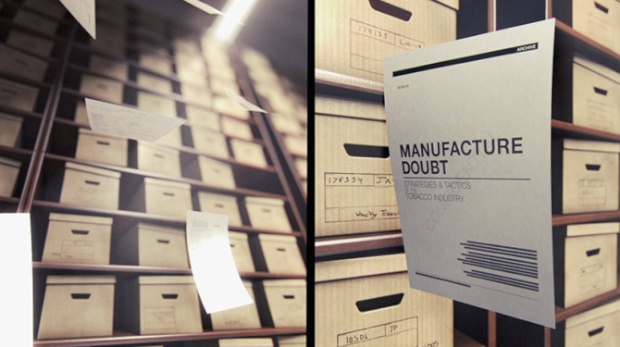 by Scott Macaulay
in Directors, Interviews
on Sep 10, 2014

It’s hard to think of a documentary that was more effective in getting viewers to at least think about altering their behavior than Robert Kenner’s Food, Inc. If you walked out and didn’t change your grocery-shopping habits or scan a food label, then you must have fallen asleep during the movie.

But Kenner’s follow-up, Merchants of Doubt, would seem to face a challenge in the “call to action” department. Here, Kenner deals with climate change, an urgent issue that requires not simply single actions but massive social and economic change to conquer. Climate change, however, is the film’s broad focus. Where Kenner’s film really scores is in its dissection of the rhetoric surrounding climate change, a corporatized dialogue that has its talking point analogs in countless other “debates” littering our public airwaves.

Just as entertaining as Food, Inc., Merchants of Doubt traces how the tobacco industry created a template for avaricious public obfuscation and how that playbook is being used to challenge mainstream climate change discourse. Watch Merchants of Doubt and you’ll never give one of those cable news think tank officials a free pass ever again.

Merchants of Doubt premieres at the Toronto International Film Festival. Below, I talk to Kenner about greed, calls to action and what sleight-of-hand card magic has to do with political debate.

Filmmaker: Your film traces “the doubt industry” to the tobacco industry’s pro-cigarette propaganda of the ’50s. These are very different media times, today, however. What’s different about the ways today’s doubt merchants and deniers seek to change our minds with the ways the cigarette industry lobbied us in the ’50s?

Kenner: What’s so interesting are the similarities across industries and the people who create doubt, regardless of the media environment. It took 50 years before the public fully accepted the dangers of cigarettes, and the same tactics that the tobacco industry used are still in practice today. If you can’t win on the science, you have to figure out ways to distract people into looking at something else. A favorite and ubiquitous theme is this idea that our freedoms are being threatened. We saw that when smoking bans were first introduced, we’ve seen it with food labeling, and we’re seeing it today with opposition to climate regulations. They may choose slightly different words, but it’s all about using fear to stop us from taking action.

Kenner: Ultimately, there are multiple motivations. One is economics: it’s hard for people to walk away from money. Oil and coal companies don’t want to leave their profits in the ground, so science that says they’re creating climate change is very inconvenient for them.

But on a more personal level, denial also becomes ideological, which is the heart of Naomi Oreskes and Erik Conway’s book. In the film, Oreskes says, “this isn’t about the science, it’s a political debate about the role of government,” and I think that’s exactly right. If you’ve decided that government is never the answer, then what do you do with a huge problem like climate change where government action is needed? Often times it’s easier to simply deny the problem than question our own beliefs.

What’s more, as Michael Shermer points out, we’re tribal beings and we tend to think like the people around us. There are consequences to going against your friends and peers, and if your team says that climate change isn’t real, that’s difficult to overcome.

Perhaps most universal of all though—none of us wants to change. We have an amazing standard of living thanks to fossil fuels, and who wants to think about giving any of that up?

Kenner: With Food, Inc. we wanted to add humor through animation. With this film there’s a lot of irony and humor that comes out through the characters, so we used animation more as a unifying device to help bring the film together rather than use it for comedy because we didn’t need it in the same way. Magic also became a powerful device in the film that will hopefully help audiences see why it’s so easy to fall for the same tricks time and time again. We were fortunate to work with close-up magician Jamy Ian Swiss, who not only performs incredible tricks but is very articulate about the metaphor of deception.

Filmmaker: With Food, Inc. you were able to point to very specific calls to action. What do you hope to motivate the average moviegoer to do with Merchants of Doubt?

Kenner: Unlike Food, Inc. we’re not trying to say, “here’s a list of things you need to do after you leave the theater,” but hopefully you’ll be able to look at the world differently. After seeing this pattern of deception from big tobacco to chemicals to climate change, hopefully audiences won’t continue to be fooled by these guys – as our magician Jamy Ian Swiss says after showing how one trick works, “once revealed, never concealed.”

Filmmaker: What did you learn making Food, Inc. that shaped the way you approached the making and also distribution of Merchants of Doubt?

Kenner: With Food, Inc. we were able to cut across political boundaries, which was extremely exciting. With this new film, I think we’ve built on that style by telling our story through an unexpected cast of characters and from an angle that audiences will not have seen before. This film is about a business of deception that’s spanned multiple industries—from tobacco, to chemicals, to pharmaceuticals. On each of these issues the harms caused have been immense — but nowhere are the stakes higher than with climate change. The changes we’re witnessing to our atmosphere will affect every person on earth and will be irreversible if they take hold. It’s been amazing to see how a small handful of people have helped tipped the scales and prevented action on these critically important issues.