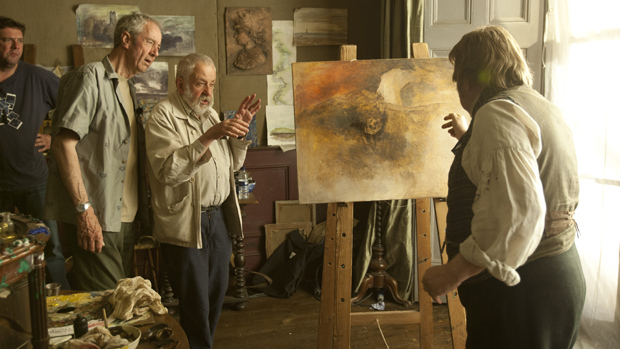 “Turner was progressive,” says cinematographer Dick Pope. “He was not a Luddite. He was very forward-looking. And if he was making the decision today, whether to shoot on film or digital, with all the tools and control of the palette [digital] offers, Mike and I felt that he would choose digital.”

“Mike,” of course, is Mike Leigh, and “Turner” is J.M.W. Turner, the 19th-century painter of roiling seas and fiery vistas containing a near-religious quality of apocalypse. Together, Leigh and Pope have made Mr. Turner, a rare artist biopic that imbues within its visual strategies a sense of its subject’s own ways of seeing. Opening with a glorious wide shot of peasant women traipsing past a windmill, the sun throwing down a haunting magic-hour glow, Mr. Turner contains not just the quality of light fans of the painter will recognize from works like “Norham Castle Sunrise,” but a sense of how the artist’s visual consciousness was shaped by both geography and the historical currents of the Industrial Revolution.

For Leigh, Mr. Turner is his first feature to be shot digitally, but Pope — whose credits include Leigh’s films from Life is Sweet forward, in addition to Dark City, The Illusionist and Bernie — has been shooting with the ARRI ALEXA for several films. “I’ve never used another digital camera,” he admits. “And I haven’t shot anything on film for the last three or four years.”

Leigh and Pope had a good first experience shooting with the ALEXA for a short, A Running Jump, commissioned by the 2012 Olympics. However, Pope says, “I was worried about shooting [Mr. Turner] digitally. But once we shot tests on these Cooke Speed Panchro lenses, those fears disappeared. What we strove to accomplish was to take the digital, electronic digital feel completely away. [And with the ALEXA and those lenses], we hadn’t gotten a film look, but not a digital one either. [It was a look] that lies without prejudice on both sides; it sits there in its own right.”

The Panchros, Pope continues, were “just the answer I was looking for. They gave a wonderful old, romantic look, slightly soft and very different from modern, cutting-edge lenses. They are from the ’50s, and they used to be the biggest lenses feature films would employ. They shot Spartacus and filmed on top of Mt. Everest. But they’ve been overtaken by modern lenses, which are so sharp and unforgiving.

“I’d never use Cooke Speed Panchros on 35mm film today. They’re good for commercials, when you want a retro look. But never on a picture, when you want something more ordinary. But [here] they helped take away that digital [feeling].” Having said that, Pope emphasizes, “I never wanted to imitate celluloid. I could have done all sorts of tricks later on, like introduce grain into the DI. I didn’t want any of that. I’m not nostalgic for film at all. Digital and film are just tools.”

As Pope reveals, Mr. Turner’s look has been the result of careful preproduction planning and research. “Right from the outset, I studied his palette,” Pope says. “I did this as a collaboration with my digital imaging technician, Peter Marsden, and first a.c., Gordon Segrove, who are both accomplished stills photographers. We researched and devised a palette based on his colors and pigments. We took this coloration, this look Turner gave his paintings, and gave it to our film, testing and refining it. The Look Up Tables we had on set were the result of that look, and nothing really changed when we went into the DI. That look is baked in right from preproduction. The colorist worked with me from the initial tests right through to the end.”

Pope explains, “Turner used warm yellow in the highlights and blue-stroked teal in the shadows. They were his two complementary colors. And the use of those two complementary colors adheres really well to color-grading theory. If you add warm yellow to the highlights and blue teal to the shadow areas, you don’t change the skin tones but the world around.”

Mr. Turner also represents a continuing use for Leigh and Pope of on-set monitors — previously, Pope says, “the bane of [Leigh’s] life.” “A few years ago,” Pope remembers, “Mike wouldn’t have had any monitor on set. On Topsy-Turvy, [we had them] but they were put under lock and key with an assistant in a [separate] room. Now it’s a bit freer, but the actors don’t get to see anything, obviously. The monitors are on set, and of course they are HD, state of the art, wonderful 17-inch OLED monitors that are so good they allow us to see the film as it will be because the Look Up Tables are built in. But when I say ‘they,’ I mean ‘one.’ It’s not like ‘video village.’”

Pope says use of on-set monitors “didn’t change Mike’s method, but they helped change mine. Seeing as fine a finished image on HD monitors helps you go further. It emboldens you, mostly to switch lamps off if you have too many — or if you have any. They help with low-level light work, candlelight work. Our biggest [cinematic] influence was Barry Lyndon, which we watched for the landscapes but also the interiors. We got to see a private viewing of Barry Lyndon three times in the Warner Brothers screening room in London. It’s a masterpiece of tableaux filmmaking, and that is what [Mike] does. He is a master of tableaux filmmaking. I love it, too, and that is why I suppose we are still together. We love the choreography of the actor, almost as if he’s on a stage. In that regard, shooting 2.35 widescreen helps the tableaux side. We shot 2.35 for Happy Go Lucky, and that was it, no turning back. I had been trying to convince Mike to do widescreen for years, and he resisted. Once he decided to let it go with Happy, we had such a ball. It allows him to get in there fairly close, get all the actors riffing off each other in one frame, in one composition.”

With regards to lighting, Pope says, “it was mostly tungsten, even on the exteriors, although I don’t really use lighting on day exteriors. But there were mostly tungsten units coming in from the windows. I love working with tungsten light — it gives you a softer look. And there’s no direct light — it’s all bounced, diffused or soft natural light. And we had the most goddamn glorious weather. It was unprecedented, the best in living memory. From May 2013 throughout August, it was the mother of all summers. The light was amazing throughout. It only rained on the last shot of the last day. We were blessed.”

Unlike a previous Leigh foray into period film, Topsy-Turvy, “there was no studio work in the film,” Pope says. “All those little rooms in little houses are real little rooms in little houses. People saw the film in Cannes and were asking me about the translight backdrops outside the windows, and that pissed me off! Trying to make it simple is really complicated. Actors in a 10-foot x 10-foot room, struggling to get the light right — people say, ‘Why didn’t you do it on a stage with a backing?’ Well, everything is real; it’s the only way Mike will work.”

As for the on-set workflow, Pope says, “We kept it simple: two Codex Vaults, one for the initial check and one for the backup on the genny truck. We had two Arri Look Files that we applied to the viewfinder and the ALEXA’s monitor output. The Codex is a wonderful tool — the entire film production is controlled live, so to speak. We have the lab with us. And every night we’d screen sync’d digital rushes with all of us watching on a large monitor in the dining bus. Mike really values that as a ritual. It allows him to listen to all of our feedback. Everyone goes: makeup, costume, hair, the art department, sound. There’s a sense of being a company of players. We haven’t let that go — it’s not about the quality of the pictures but about the shared experience. But the actors are not invited; they are left out completely!”

Despite his enthusiasm for the ALEXA, Pope says he hopes to shoot celluloid again, even as “the whole infrastructure of film is collapsing in the U.K.” But he thinks digital’s new tools should not be avoided simply because of “nostalgia for the past.” Pope recalls an interview he did in Cannes with a journalist from France’s Le Monde. He had reviewed Chris Kenneally’s feature-length look at digital cinema, Side by Side, in which Pope appears. The journalist told Pope that in his review, he had recounted the arguments for and against digital cinema before writing, “‘I’ve just come back from Cannes, and the revolution is over because Mr. Turner looks so complete in its own right.’”

“I thought that was the biggest compliment,” Pope recalls. “It’s a film.