“This is The Kind of Thing I Want in a Restaurant:” Vanessa McDonnell on John’s of 12th Street 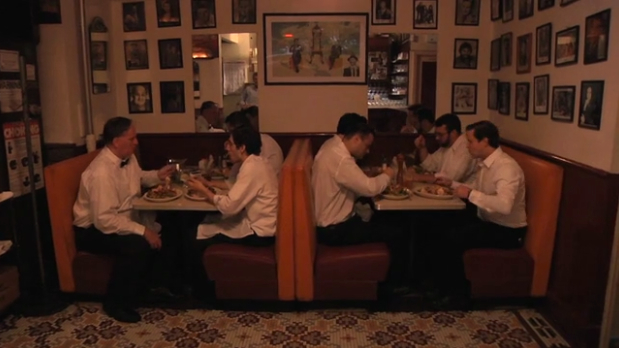 by Sarah Salovaara
in Directing, Director Interviews, Filmmaking
on Nov 10, 2014

If you’ve ever worked in a restaurant, you may have a sense of the sort of family dynamics the harried environment can rapidly inspire. John’s of 12th Street, a dyed-in-the-wool Italian establishment in the East Village, takes this close-knit enclave to its apotheosis. As rendered in Vanessa McDonnell’s observational documentary of the same name, the restaurant is purely populated by the sort of old school New York characters that can only be regarded as a dying breed. From opening till close, McDonnell captures as many yarns spun over the tables as chicken parms are laid into the oven. In advance of John’s of 12th Street‘s world premiere at Spectacle Theater this Wednesday, Filmmaker spoke to McDonnell about the freeing nature of technical limitations, whittling down footage, and the new New York.

Filmmaker: How did you first come across John’s? Were they immediately receptive to the documentary?

Vanessa McDonnell: I used to live on 14th Street and Avenue C, and my boyfriend (now husband) lived on 8th, so John’s was equidistant for us and we ate dinner there pretty often. On one of our early dates, I ordered spaghetti and meatballs and the waiter didn’t hear the part about the meatballs. So I repeated it quietly, and kind of sheepishly. The waiter took a step back and said very loudly to the whole room, “Of course you can have meatballs. The lady likes meatballs. So what?” This is the kind of thing I want in a restaurant.

One night Mike Alpert, one of the owners, chatted with us after we’d finished a bottle of wine. After he walked away my boyfriend half-jokingly said I should ask him for a job. I’d worked as a cook in an Italian restaurant throughout high school and I was quite wistful about it. No woman had ever worked at John’s and we thought I could be the first. I asked Mike and was rebuffed, so I said, “I make films. Let me make a documentary about this place instead.” And he said, “Fine, whatever. Just don’t get in the way.” Mike and his partner of 40 years Nick Sitnycky were great sports about it. They said I was going to be the next Nora Ephron. I guess they never heard of Lena Dunham – she probably doesn’t eat there. I imagine she’s gluten-free or something.

Filmmaker: The film is designed to convey the course of a day at John’s from open to close. Did you know this was the structure from the outset? How long was the actual filming process?

McDonnell: I basically filmed everything that happened at the restaurant for a month or so. Then I went home and became paralyzed by the mountain of footage I had. It took me a very long time just to watch all of it. I didn’t decide on the structure right away. I tried out different things until I came up with something that would allow me to tell a story in an uncomplicated way. A day in the life of a restaurant is a great way to mark time – there is an arc already in there. The structure had to be simple because I didn’t want to use much conventional exposition – I didn’t want to create a historical portrait or a food network-type thing. I wanted the audience to be able to see this unique place and how it works, but also to just observe the everyday lives of some strangers, which is something I find inherently interesting. Not everyone does.

Filmmaker: What are some of the challenges posed by filming in a fast moving environment as a one woman band? I imagine you have to be selective in the moment as coverage is more or less out of the question.

McDonnell: It was good that Mike told me not to get in the way, because it placed a useful set of limitations on filming. I couldn’t have a crew or lights. It was just me with the camera on a light-weight unipod, and I would put a lavalier on different people each night or every few hours and follow them around. I had a shotgun on the camera too so that I could also just follow the action when something interesting happened. I loved being at the restaurant and I loved spending time with everyone there. One of the biggest challenges for me was to remember not to talk too much. I don’t insert my own voice in the film and I created more work for myself in editing by having one-on-one conversations and joking and laughing. Filming in the kitchen was hard because kitchen crews have to focus and move fast and I felt bad about putting a camera in their personal space while they were trying to work. But they were also really great about it.

Filmmaker: Did you consider weighing the future of John’s now that it’s been bought by Brett Rasinski, a figurehead of downtown’s “revitalization”?

McDonnell: This is something that came up after I filmed, and I thought about integrating some follow-up. But then the sale did not actually happen, for whatever reason. I personally don’t support Rasinski’s business model of taking old, family-owned New York institutions and making them into overpriced hangouts for models and people who want to have sex with models. I think Jeremiah Moss, who runs the blog Jeremiah’s Vanishing New York, said it best: “If this guy fucks it up, if he pulls a Beatrice Inn maneuver, a Carbone, a Fedora, a Bill’s Gay 90s-John deLucie bullshit move, then may the gods boil him in oil for the rest of his days on earth.”

That being said, Mike Alpert passed away and co-owner Nick Sitnycky has every right to retire when he wants to after working hard at John’s for over 40 years. Nick, who still owns John’s at this point, has said that if he does eventually sell, he’d require that the decor and menu remain unchanged and the staff be “looked after.”

Filmmaker: What is it about John’s that inspires such a fierce allegiance among the many staff and patrons depicted?

McDonnell: This is very hard to put into words. I hope I’ve been able to express it in the film. The restaurant is a self-contained world in many ways and it feels very rich and multilayered. It’s comfortable and familiar and you want to spend time in there — you don’t want to leave. Real social life happens in there. It’s the kind of environment that new restaurants spend tens of thousands of dollars to try to create by paying designers, architects, branding people, menu designers and cocktail consultants. They buy wood beams and old wood floors from other states and haul them here and do faux-worn-wall treatments. But it’s not the same. You can’t manufacture the personalities of the people who own, work and eat at a place like John’s and they inform the experience.

I don’t want to speak for the staff because people have such complicated relationships to their jobs, but in some ways John’s is like a family in that their relationships contain so many things — love and loyalty and joy and also strife. But certainly there’s a reason so many of them have been working there for much of their adult lives.

Filmmaker: You edited and produced Aaron Schimberg’s Go Down Death, which had the first ever week-long run at Spectacle in March/April. Where does John’s fit in with the theater’s programming? Is there a specific reason you forwent the festival route and decided to World Premiere at Spectacle?

McDonnell: I didn’t want to go through a tortuous year of submitting and advocating for the film, asking people to write emails, stalking festival programmers on Facebook to find our mutual friends, et cetera, especially because I’m trying to get a new film underway.

When we showed Go Down Death at Spectacle, we had the most intelligent, interesting, engaged audiences we’ve ever had, we got smart reviews and we got distribution. Spectacle has been a huge supporter of me and Aaron, and I think the fact that my film seeks to convey people’s working lives was interesting to them. Actually, Spectacle and John’s have some things in common. They are both unique and increasingly unlikely in the context of what New York City has become. They’ve both seen ultra-rapid change in their immediate surroundings. Both are worth supporting and strenuously defending.