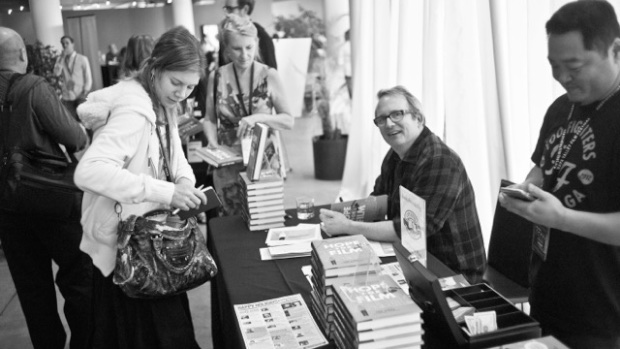 by Ted Hope
in Distribution, Filmmaking, Financing
on Dec 3, 2014

Along with the usual “ten best” lists, year’s ends in the movie blogosphere have recently included producer and Fandor CEO’s exhaustive surveys of the film industry’s good and the bad — the business practices, social trends and technological issues that improve or deteriorate our lives as both filmmakers and film viewers. This year, prior to their complete unveiling at his Hope for Film blog, Hope has given three outlets early previews. Below, here at Filmmaker, are 10 More Bad Things about the Film Business, following up on Hope’s first ten over at Keyframe and 10 Really Good Things about the Film Business at Film Comment.

I have been chronicling the negative in our film industry for sometime now — six years in these type of posts, but my original rant goes back to 1995 for Filmmaker Magazine. Much of what I have stated in years past remains still in need of getting done. Dig in to my past lists and you will have well over 100 things that we could be doing better. You’d think with so much wrong, more people would stand up and say, “This has got to change!” Where is the film industry’s national leadership? For the first time I believe we are capable of conceptualizing what an entire systems reboot could be — one that looks out for ALL the stakeholders. Isn’t it time for a national summit on this?

I have been also chronicling the good too, but today that’s for another day. By detailing what we have failed to do, done wrong or continue to ignore, we build a road map of how we can improve things for the future. Here’s my contribution to that map for 2014. Let’s build this better together.

We Fail To Promote Cinema’s Most Unique And Powerful Attributes. Film creates a shared emotional response amongst strangers in the dark. Great movies compel us to discuss them afterwards. Movies create bridges of empathy across divides of difference. In this era when we have less available time than ever before, as well as access to more ways to spend it, people want a greater return on the investment of their engagement (ROIE). Tom’s Shoes gets this. Cause-based investment understands we want to do good as we do well. Yet here in the film biz we only evaluate work generally on its entertainment value or profit potential. It is time to unlock cinema’s true utility.

The Promise Of The Internet Has Not Been Delivered. Forget jetpacks, imagine if we just took the promise of access to everything (web 1.0) and married it to the promise of engagement with everyone (web 2.0). It would be an even more exciting way to watch movies (yes, I prefer to watch in the theater) as we can embed “calls to action” (CTAs) within the experience itself. Conversations would be free of temporality. Instead of offering simple consumption, depth could be provided, surrounding the content with context, community and connection. Cinema’s power to bring people together would be unleashed. Film’s ability to keep communities engaged would be revealed. The world would be a better place.

Net Neutrality Is Not Recognized As An Absolute Necessity. With the cable biz far from being a free zone, the last hope of a level playing field is the internet. Somehow the commitment to preserve it as such has been lost. Okay, sure, Obama has stood up and spoke of this necessity, but what took him so damn long? As Fred Wilson has pointed out, this is a David & Goliath issue: “a fight between the one billion active domains and the roughly six or seven wired and wireless carriers who own the internet access market in the U.S.” There is no doubt about the “cable industry fuckery.” The fight does go on, and it is a good sign that the FCC got a record number of comments (over three million) regarding their interest in creating a “fast lane” for those who are willing to pay. Yet, it grows forever more complicated. First we really just focused on the “last mile.” Now we are looking at the CDNs that provide the web’s backbone. Hopefully soon we will also place our attention on the walled gardens of commerce that provide the direct interaction with audience and consumers. And on that note…

Respected Companies Continue To Tacitly Support Illegal Activity Via Advertising On Pirate Sites And Elsewhere. The MPAA is doing something about it, raising the alarm. Recognizing “when adverts from well known brands appear on illegal websites, they lend them a look of legitimacy and inadvertently fool consumers into thinking the site is authentic” the U.K. has started placing warnings on such sites. Maybe the U.S. will also start to take it seriously….

Netflix & iTunes Dropped Many Indie Titles That Don’t Have Closed Captions. Granted, the government-required closed captioning has made many titles available to a community that previously had been deprived, but many filmmakers witnessed their work being removed from the platforms, even when their work wasn’t legally required yet to have closed captioning. All the really wise filmmakers started budgeting for closed captioning going forward. Yet for the discerning film fan that likes indie and foreign titles, this all added up to less access to diverse work.

The Availability Gap Widens. DVD rental was not a permissions-based business. If you owned a video store, you could rent anything. Streaming is, however; we need to license media rights to offer online streams and downloads, and that is both expensive and complicated. Who wins? Not the fans, that’s for sure. Probably not even the rights holders truly benefit as not only are they not earning money, but new titles are supplanting older ones in the canon and our other places of discovery. Sure, Hollywood may be offering more than before, but that is always just “this year’s model” and not the undiscovered or forgotten gems of yesteryear. We live in an era where unless you buy it, you may not be able to ever see it. We’ve lost a great deal when we lost our video stores. And no matter how much is written about it, it won’t bring them back.

The Entertainment Industry Furthers Rape Culture By Our Tacit Support Of Possible Perpetrators Over Declared Victims. This is a complex subject with no easy answers, but it is an incredibly important one that we can not ignore. There are far more victims of sexual abuse than there are liars about it — and we in the film industry are permitting this trend to continue. We need to create a culture where victims know they can speak without further suffering, not one where perpetrators feel they will be given the benefit of the doubt and can continue to create for an entertainment industry that only respects the powerful. The law must protect the innocent, but our culture must enable victims to rise above the shame. To proclaim that because we don’t know what really happened, we can not decide for ourselves whom we believe protects and encourages the powerful and silences the victims. There is no place where this not only is truer but more problematic than in the entertainment industry, where directors, musicians, managers, actors and others have leveraged their power to not just prey on their victims but to walk away from prosecution and signal to the public that for any victims to speak out will not only shame but ostracize them from the industry. To quote Amy Berg in regards to a scene in her important film An Open Secret, “The question is, if you are an adult at one of these parties where so much is going on out in the open, what is your responsibility?” We are all at that party now. We need to accept our mutual responsibility. I agree with Aaron Brady: We fortunately are not the judge and jury, and thus can decide just for ourselves. We are not the law. We do not need to do business with folks who have amassed a constant string of complaints. There is a place for culture and community to rise above the silencing of victims and we need to find it. I find the backlash against Cosby very heartening and hopefully a sign that things are changing.

There Is Tremendous Gender Disparity In Terms Of On-Screen Representation. The USC Annenburg study on this found: “Across 4,506 speaking characters evaluated, 29.2% were female and 70.8% were male.” OUCH! This is not how life in the real world balances out, and to portray it falsely has negative repercussions. The New York Times got hip to this finally, giving us an analysis and pointing out that in family films that were 2.42 male characters for every female.

There Remains Tremendous Gender Disparity Behind The Camera. The USC Annenburg study on this found that: “Female directors, writers, and producers comprised just 15.9% of the workforce (on popular films) in 2013, outnumbered by a ratio of 5.3 to 1.” Perhaps there is a connection between my prior point and this one, but we can all work to do better on both.

Racial disparity, before and behind the camera, remains huge, with Hollywood offering up heroes and directors generally of a predominately white variety despite a world that is hardly such. It is particularly discouraging when top directors and actors just give in and say, alas, that is just how it is if we want to get our movies financed. It’s not. That’s bullshit. It is just how it is until someone with enough power says, “No, I am not going to perpetuate such nonsense and demand to represent reality.” Ridley could have.

And: Bad Things 2012 and More Ways The Film Biz Is Failing 2010. You can even start with the 2009 list. But remember, lists like this only makes fools despair. There is tremendous opportunity in them there hills, and as we will see tomorrow, things do keep getting better too.