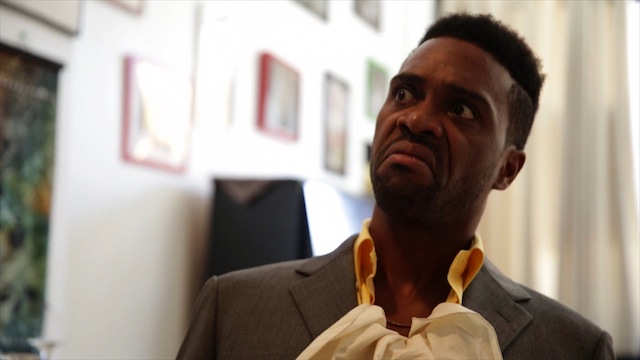 by Sarah Salovaara
in Directing, Filmmaking
on Jan 22, 2015

Certain to be one of the most intelligent films at Sundance, Shaka King’s Mulignans is four minutes of biting, vicious satire that ably turns the tables on its viewer. A response to the casual and not-so-casual racism of your average gangster film, King and his cohorts commiserate from the stoop of their Bed-Stuy brownstone about the influx of white people in the neighborhood, in thick Italian accents, wild gesticulations and track suits. Even before King’s character is throwing his cigarette butt at a passing white boy or casually calling a white woman the n-word, you sense just how deeply absurd it is that an entire genre has coasted on these so-called gags and prods for as many decades as it has. Filmmaker spoke to King about white supremacy, diversity in the media, and the disarming nature of satire. Mulignans world premieres tonight in the Shorts 1 Program at the Sundance Film Festival.

Filmmaker: This is a truly holistic satire. It works its way in the dialogue, the accents, the casting, the location, the content, and the filmmaking, especially the close-up pans. Something I keep thinking about is the notion of “colorblind casting” and how Hollywood intently eschews it, almost only giving roles to Black actors that are explicitly and necessarily written as Black. One might argue that you’re applying their axiom to Mulignans with rather revealing results, but I was curious what, first and foremost, you wanted to take aim at when conceptualizing the film and how you formulated the script.

Shaka King: Hollywood like every other major American institution operates within a White supremacist framework. What do I mean by White supremacist? Google Image search “God.” You’d think an effigy of God would resemble the Sun or at least a woman. But under White supremacy, God looks like Santa Claus. That’s because White supremacy propagates Whiteness, particularly White maleness, as the standard of humanity. Every other race by design subsists on the periphery because race is a construct of White supremacy designed exclusively to foster it. With Mulignans we wanted to attempt the reverse of White supremacy. We wanted to marginalize Whiteness and the White viewer. Or see if that’s even possible. It was a racial experiment in a lot of ways.

The idea was that of my long time editor, Kristan Sprague. It was inspired by A Bronx Tale. In the movie there’s a scene where the protagonist and his crew, all Italian, have an exchange about a Black passerby along the lines of “there goes the neighborhood.” Later they assault a group of Black boys biking past. I went to High School in an Italian neighborhood and while I wasn’t physically attacked I had my “n****r” cherry popped, the cops made monkey sounds at me, etc. I lemons-to-lemonaded these experiences by imitating Guido caricatures with my cousin and best friend from High School. Kristan, having witnessed us in action over the years, suggested we satirize the Bronx Tale scene in a short allegory about Bed Stuy’s gentrification, culminating with us assaulting a White jogger: the avatar of said gentrification. The early drafts ended with us screaming “n****r” as we bludgeoned a White man to death with a bat: literally a hate crime. While that would certainly exorcize some pent up rage, it would also ensure that we never made a dollar in this industry and probably get our phones tapped. And for what? I’m actually far from a hateful person. I love people and I love life. So I shelved the idea for a year. Until one day it hit me that what we actually wanted to do with this film was hit the audience with a bat.

For our White viewers, we wanted to create the sensory experience of what it’s like to be called a “n****r.” And for that to work it had to be blindsiding. So when we approached writing the script we decided to introduce what the film is really about mid-way through and upfront seduce the audience with jokes on jokes. It’s like “How many fingers am I holding up?” Then I punch you in the face. But the thing I discovered in writing and improvising is that we didn’t have to stick the jokes upfront because the whole thing is a gag, down to the costumes. And that’s the beauty of satire and in a lot of ways the other side of racism. Like all terrible things, it’s kind of fucking hilarious. Joe Pesci calling Arabs “sand n****rs” in Casino? One of the funniest things I’ve ever seen in a movie. And understand, by “n****r” he means me.

Filmmaker: Do you think that satire is the most effective way to illustrate the gulf in misunderstanding surrounding the portrayal of minorities in media? The approach definitely allows you to underscore the ridiculousness of such characterizations.

King: I do. Especially in today’s cosmetically progressive social climate where it’s racist to say n****r but it isn’t racist to treat n****rs like n****rs. We live in a very reactionary time. Everyone’s on the defensive and on the attack. Satire is great because it’s confusing. It’s disarming. Humor acts as an anesthetic and that allows you to really get in there and explore the gristle.

Filmmaker: You grew up in Bed-Stuy and still live there, despite the many changes neighborhood has undergone. Do you feel alienated to some extent in your own home? Does gentrification feel inevitable?

King: I don’t have the stats to back it up but Bed Stuy still feels like a Black neighborhood to me. So does Harlem.

Filmmaker: What, for you, is the perfect counterpoint to Mulignans? A film that is egregiously unaware of its antagonization of other cultures.

King: Most American filmmaking, be it Hollywood or Independent is “racially problematic.” And that manifests in a variety of ways: be it Whitewashing or tokenism or just plain old stereotyping. I find Quentin Tarantino’s “dead n****r storage” Pulp Fiction soliloquy just as offensive as Anthony Mackie consistently being cast as a leading man in a Black movie but a sidekick in a White movie, just as offensive as the paper bag casting in Precious. But all of these things are inevitable under White supremacy. Until White supremacy is dismantled we can only address these issues from the outside in. And at best that leads to cosmetic change like “diversity.” Diversity is racism’s Post-It note. It’s like “don’t forget niggas.” But who remembers to look at Post-It notes?

Filmmaker: Where are you taking the film after Sundance? Beyond the festival circuit.

King: I want to get it up on Worldstar. I also think it’d be cool to shoot some episodes for Adult Swim.