Lost in a Dream 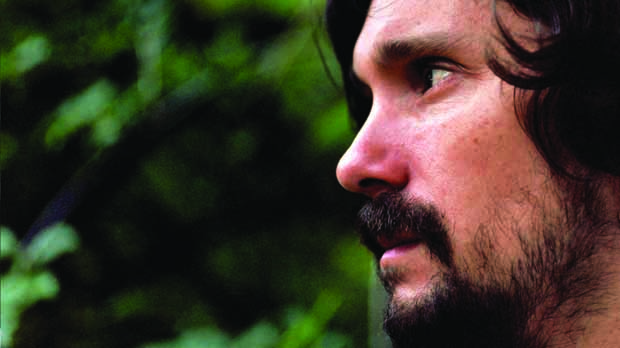 I agree with the Argentine director. In our present age — when everyone has to be “connected” all the time, doing more than one thing — the chatter, the noise, can be maddening. Encountering the work of Lisandro Alonso makes me recall the feeling of lying on the floor and listening to a record as a teenager: not texting or talking or answering emails, simply listening.

Alonso’s films let the viewer pay attention and dream simultaneously. Spare in dialogue, attentive to landscapes, meditative in pacing, they allow one to get lost in the frame. His work is often referred to as “slow cinema,” but he prefers the term “contemplative cinema.”

In October, during the New York Film Festival, Alonso traveled to New York to become the second Filmmaker in Residence at the Film Society of Lincoln Center. (The first was English director Andrea Arnold in 2013.) The residency brings prominent filmmakers to New York to work with peers, develop new projects, teach, write and share their films with American audiences. Explains Lesli Klainberg, executive director of the Film Society, “Lisandro was chosen back in May during Cannes. Dennis Lim and Kent Jones had both seen Jauja and thought it was easily one of the best films in the festival. We were already fans of his work, having just shown his first feature, La Libertad, in our Art of the Real series. So Dennis reached out to him and the timing was ideal; he was in the early stages of working on a new project and was excited by the idea of working on it here in New York. Lisandro was a great match for the program both logistically, and, most importantly, artistically.”

That new project will be set partly in Brazil and partly in the U.S. During his residency, Alonso told me that he is thinking about American gold rushes and wants to explore in future trips the regions in the country where they occurred. But, simply being in the states this fall helped him understand the American landscape. “I start thinking in terms of location, where I want to shoot. I like isolated places, and then I have to put some humans in the scene just to shoot the places,” Alonso told me, laughing.

Writing was never going to be the focus of Alonso’s residency. “I don’t like writing,” he explained to Lim, director of programming at the Film Society, during a Q&A following a screening of the director’s 2004 film, Los Muertos. “I’ll probably write 15 pages while I am here. I hope that’s OK.” Lim assured him that this was fine. After all, the script for Alonso’s latest effort, Jauja, was only around 20 pages — and it’s his wordiest film to date. Of course, it is always the artists from whom we want to hear the most who refuse to elaborate, all too aware of the limits of language when describing one’s art. “When you talk to someone and they decide to give you an answer, it’s boring,” Alonso argues. “I think you become vulgar when you try to tell [explain] things … What is happening in your head is what is happening in the film. That’s it.”

His newest film, Jauja, which had its U.S. premiere at the 2014 New York Film Festival and is being released by Cinema Guild, is a departure for Alonso in several ways. Beyond containing more dialogue than his previous films, which Alonso attributes to his collaboration with Argentine poet Fabián Casas, it is also the first time he has worked with cinematographer Timo Salminen, known for his extensive work with Aki Kaurismäki, and with professional actors. The film stars and is produced by Viggo Mortensen, whose own distinct sensibilities are very much present on the screen.

Jauja is set in Patagonia in the late 1870s, with Mortensen playing the part of Captain Dinesen, a Danish military engineer who rides deep into the desert in search of his adolescent daughter, who has run off with a young Argentine soldier. In pursuing her, Dinesen perhaps forgets why else he has come to Patagonia.

Many strange events transpire in the film, and it is left up to the viewer to decide what they mean. “I cannot say in two seconds what the film is about, and that’s what I enjoy about it compared to other films I’ve made. Maybe in a couple of years, I’ll know what the film is about,” Alonso said. “I think there is value in a film that makes you feel uncomfortable.”

While Alonso’s other films can arguably make one feel uncomfortable, it’s true that “what they are about” is easier to pinpoint. Los Muertos, La Libertad and Liverpool all explore themes of freedom, poverty and what it means to be human. In Jauja “what the film is about” is more of a feeling, an internalization of the mood and vision created, rather than something easily articulable.

Mortensen’s Danish heritage, Argentine childhood and underused gift for humor make him the only actor who could have collaborated with Alonso to create this film. “The movie accomplishes something new and difficult to do. In the end, it’s a movie as Danish in sensibility as it is Argentine,” Mortensen said at a Q&A following a New York Film Festival screening of Jauja. There, Mortensen and the director took cues from one another with humor and ease. His work with Casas, Alonso explained, made for a less traditional director-writer collaboration than most. Casas, a poet and novelist, first worked with Alonso on a short film, during which Casas was writing a novel. To come up with the script, Casas allowed Alonso to pick and choose elements from his book-in-progress that he would like to use.

When coming together to write Jauja, this more porous approach continued. Alonso chose to change Mortensen’s character from the Englishman that Casas had written to a Danish man. In explaining this decision, Alonso noted that while the English had colonial aspirations, the Danes did not. In making the character Danish, Alsonso sidesteps the usual references to Anglo-Argentine history.

Alonso wanted to create a dreamlike, even confusing, quality that he favors in film. This choice also meant that much of the film’s dialogue is in Danish. “No one speaks the language,” Alonso said. “Well, five million people do,” Mortensen softly corrected him. “OK, but they are all in Denmark. Everywhere else it is this exotic language that no one can understand.”

The language gap created its own problems during filming. As Mortensen recalled, after the first take of the first scene with Danish dialogue, “Lisandro looked very displeased. So I asked him what was wrong, and he said, ‘I can’t understand anything anyone is saying!’” Mortensen assured him that the lines were all said correctly, but Alonso still seemed skeptical. When I spoke with him later, he told me, “I still don’t know if they said the right lines. I have no idea what they are saying.”

An important part of Alonso’s residency was educational, with the filmmaker required to visit two film classes at Harvard — Lim’s “Art of the Real” and Lucien Castaing-Taylor’s “Sensory Ethnography” — and talk with students. A new course this past fall sharing the name of Lim’s annual Film Society of Lincoln Center series, “Art of the Real,” as described in the Harvard catalog, is a seminar that discusses “the evolution of documentary in terms of cinematic engagements with the generative possibilities of the real, the confluence of documentary and experimental film, and the emergence of documentary as a mode of art making.” For Lim, Alonso’s work fits seamlessly into this context. He explains, “Alonso’s first feature, La Libertad (2001), is a groundbreaking work in many ways, a film that doesn’t simply blur the distinctions between documentary and fiction but creates and inhabits a space in between.”

At the seminar, Alonso discussed creating La Libertad’s hybrid space. After leaving film school, Alonso found himself broke, traveling back and forth between Buenos Aires and La Pampa, where his family farm is located. His parents gave him money to make a film, “mostly because they were worried about me,” he admitted. While driving in the country, he came upon a woodcutter and stopped to talk to him. He asked the woodcutter his name and if he could make a film about him. The woodcutter, Misael, had never seen or heard of “film” before. Instructing him not to look at the camera or smile, Alonso spent hours observing Misael’s natural movements so that he could accommodate them with his camera instead of the other way around.

Alonso and Misael shot La Libertad in 10 days, and it was shown two years later at the Cannes Film Festival. Festival programmers, however, requested a change to the ending that Alonso did not want to make. Eventually he conceded, as the Cannes berth would enable him to continue making films, but that preferred ending has now been restored and can be seen on DVD versions of the film. In that ending, Misael is revealed to be “acting” his role as a woodcutter, making the film neither a documentary nor ethnographic study.

Alonso’s next films, Los Muertos and Liverpool, also explore notions of freedom, poverty and humanity, employing nonprofessional actors and moving at a contemplative pace with minimal dialogue. “The main job that I have is organizing images and letting this strange feeling about reality emerge,” Alonso told the students. Or, as one student, Simona Schneider, told me afterward, “He wanted to leave it to the phantasms created in other people’s heads.”

Attending these classes, I was curious about how students would react to a mentor who was so unwilling to tell them what to do or think. For Schneider, whose dissertation project is about defining lyrical spectatorship, Alonso’s nondidactic approach was inspiring. “After hearing Lisandro speak, I realized that maybe I could be a director,” she told me, “in the sense of being a medium for allowing other people to do their jobs — choosing the right people, trusting them, stepping back from the process and being the hub of the wheel.” Of that process, Alonso told the students about his collaboration with Saliminen. One day the cinematographer was setting light for a night shot (they were shooting day for night), and Alonso recalled asking him, “‘Where is that light coming from?’ And he told me, ‘From the lamp.’ After that I didn’t ask any more questions. I am not going to hire Timo Saliminen and then tell him how to do his job.”

Each of Alonso’s films builds on the previous one. In Lim’s class, the students watched an Alonso short — part of a box set called Correspondences, in which filmmakers were paired and asked to work with one another. Alonso’s “partner” was the Spanish director Albert Serra. For their “collaboration,” neither filmmaker addressed the other’s work. Serra made a two-and-a-half hour film, The Lord Worked Wonders in Me, while Alonso’s film, Untitled (Letter for Serra) (2011), revisits the woodcutter we met in La Libertad, who appears again in Jauja. This short, on which Alonso and Casas first collaborated, is in many ways a precursor to the new feature. At the time, Casas was writing a novel about a dog named Jersey. Alonso did not want to make a movie about a dog, so he took some of Jersey’s mannerisms and applied them to his human characters.

Originally, the ending of Jauja was the beginning. I cannot imagine the film working as well with the end at the beginning (you’ll have to see it to learn why). With the beginning now properly at the end where it belongs, Alonso told the audience back at Lincoln Center, “It seems like we are talking nonsense about a film that no one understands — but, in fact, it is all true.”n