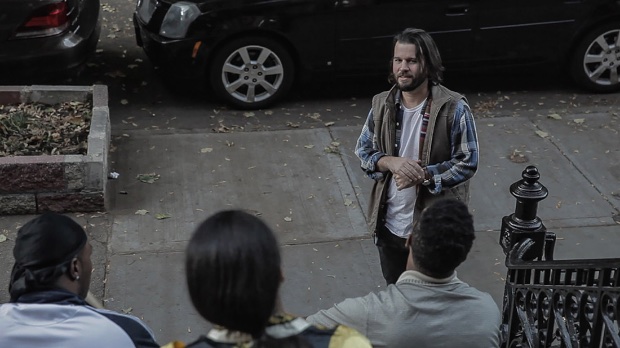 From the Sundance catalog:

Called “four minutes of biting, vicious satire” by Filmmaker‘s Sarah Salovaara, Muligans was shot in one day and is one long scene. Below, Patterson discusses how he made that happen.

Patterson: I ended up being cinematographer on this film because Shaka called and asked me if I wanted to shoot another film. The main reason I did the job is because I believe in the director and his vision. I enjoy and would go see the type of films I have made with Shaka. The main factor that led me to make this film with Shaka was the storytelling, which started with the script. I really like the idea of actually laughing out loud while reading a script — and Shaka never fails to deliver laughs.

Patterson: My artistic goals were to be honest in telling the story. I wanted the cinematography to enhance the film by not getting in the way and not distracting the storyline. On occasion, we emphasized dramatic beats using the cinematography. At the end of the film, there is a timely whip pan which accentuates the beat of that moment. Much of the film is static medium shots done on a tripod.

Patterson: The biggest challenge in the film was shooting it all in one day. We met the challenge and succeeded.

Patterson: We shot on three Canon 5Ds. We made that decision because that is what we had available. Canon has made affordable cameras you can shoot on and get films into Sundance…back in the day, that would not have been possible. We shot on Canon zooms 24-105mm. I think we also had a 14-35mm zoom too.

Patterson: My approach to lighting on this film was to respect nature. We could only use available light, because we shot 96% of the film exterior on a stoop in Brooklyn. By respecting nature, I mean I paid attention to what was happening with the natural light and moved my cameras accordingly…certain angles look better during certain times of the day. That takes time and practice to figure out.

Patterson: The film is one long scene and the difficulty of realizing it was completing it in one day of filming. We did it with three cameras. This film could not have been done in one day, with the coverage we had, if we only had one camera. The decision to use three cameras made it all possible. I’d also be lying if I did not mention our amazing cast, our crew and their abilities.

Patterson: I love this question. There is no (DI) digital intermediate when you start and finish on digital. The look is something Shaka and I made in the color grade session, because we shot the film with a very flat look.