“Someone Always Has to Compromise”: Peter Strickland on The Duke of Burgundy 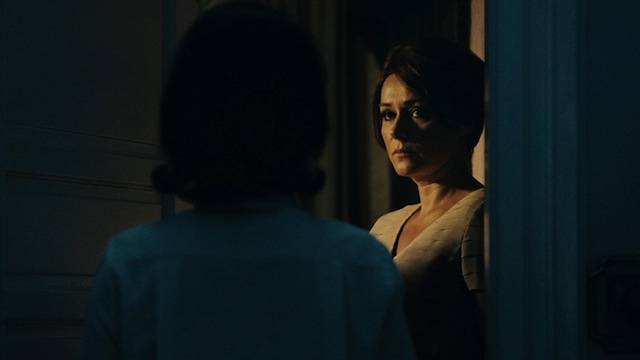 The Duke of Burgundy

by Sarah Salovaara
in Directing, Filmmaking
on Jan 22, 2015

Peter Strickland, The Duke of Burgundy

With The Duke of Burgundy, the cinephilic English director Peter Strickland has made his third — and perhaps best — film to playfully riff on genre conventions. What begins as a bloodless tale of mistress and maid blossoms into a poignant, cyclical exploration of a couple’s inability to compromise on sexual predilections. Best experienced with an uninitiated pair of eyes, The Duke of Burgundy is an increasingly rare film that, for all its reflexive homages and aural intricacies, never forgoes substance for style. Filmmaker spoke to Strickland about scripting tone, genre aesthetics, and the ways in which his film aims to overturn its sexploitation forbearers. The Duke of Burgundy opens tomorrow, courtesy of Sundance Selects.

Filmmaker: I love a lot of things about this film, but the tone is maybe foremost because it is so unexpected. You have what’s a traditionally objective sexploitation setup and you slowly modulate it into something touching, witty, and melancholic. Tonally, do you set those beats at the script stage, or are you discovering things on set with the actors?

Peter Strickland: A lot of surprises happen on set, but the meat of it happens in the script. I don’t have the idea in advance, it’s something I find while writing it. For instance, the first draft was incredibly different from how it turned out. It was set in the real world, everyone had jobs. The way the project began was quite unusual. I was commissioned for a remake of Jess Franco’s Lorna the Exorcist, which initially I was excited about before realizing I don’t know too much about Franco, other than that he’s disregarded in the pantheon. People don’t want to deal with sexploitation the same way they are into B-movies and giallo. So, I thought to immerse myself in the genre, but use it as a starting point only.

I wanted to take the tropes of the genre – the female lovers, the sadomasochism – and start the first ten minutes as though you were living in one of those films, but then pull the rug out from underneath you. Suddenly, the ice queen is not the ice queen, she goes to bed in her pajamas like most people. She’s not remotely dominant at all. In dealing with sex, you can’t be too jokey, you can’t be too serious, I really didn’t want to go the irony route, so finding the tone is difficult. I don’t want to make fun of the characters, but you can make fun of the situations. Like people missing their marks, or missing their cues, you get tied up if there’s a mosquito in the room. The humor is very dry, I tried to underplay it as much as possible, not accentuate it with music or anything.

Filmmaker: Your use of repetition in the script ties into the performative aspect of the relationship, but it’s also revelatory in a way that’s different from Berberian Sound Studio. In Berberian, I felt like you used repetition to underscore the banality of Toby Jones’ condition, and how that can kind of cycle can lead to psychological chaos. But in this film, the tiniest change in a line reading can alter our interpretation.

Strickland: And it can affect Evelyn’s joy as well. If the nuance isn’t there, she’s not getting excited. Their games parallel a director’s games, the need to get it right. Evelyn has a parallel script to my script. She marks the floor so she can look through the keyhole, like I mark the actors. When Evelyn masturbates, she’s directing Cynthia. But what I find interesting about the repetition in this film compared to Berberian, as you mentioned, is that nothing changes, it’s our understanding that changes. Our perspective gives the actions a different meaning each time.

Filmmaker: Why did you feel the need to make them both women?

Strickland: I think just because of the genre. There is an immediate admission of sleaze, and I didn’t want to apologize for it. Back then, I assume most directors were male heterosexuals, and the target audience was male heterosexuals, and I thought, okay, this is a troubling starting point as a male director. In hindsight, having the cast be entirely female was my way of diluting that somehow. So they aren’t lesbians, there is no alternative. I didn’t want a counterpoint in there. And I thought to have the other women be older, and not the heterosexual male vision of long-legged women in their twenties and so on. I definitely thought about all options. In fact, the purest option would have been two men, but I’m doing that for my next film, so I thought, “Let’s just save that.”

Filmmaker: Also, if it was a heterosexual couple, you wouldn’t really be able to escape the pre-ordained gendered roles.

Strickland: It would have been troubled. I could have done an animated version. Two jellyfishes. [Laughs.]

Filmmaker: You mentioned that they don’t have jobs, but—

Strickland: Evelyn is a lepidopterist and Cynthia is a orthopterist, but they’re hobbies.

Filmmaker: Well, that’s the one realm in which Evelyn feels inferior to Cynthia.

Strickland: There was a lot more in the original script about that that we cut out.

Filmmaker: How did you decide on those two fields? The butterflies lend a lot to your Brakhage imagery at the end, and your use of sound.

Strickland: Well, I have a bunch of reasons, but one of them is quite shameless. I put out a record a number of years ago, 12 years ago, of cricket sounds. I thought, let’s just make this film and we can sell the record. [Laughs.] They’re all under my bed. The truth comes out. So there was that element, but there was also this very powerful image of a cricket hibernating in his tomb, which paralleled Evelyn.

Filmmaker: With respect to the aesthetics, I imagine it would be hard to achieve the exact look of sexploitation films nowadays, technology factors into it, but there’s also the difficulty of translating the gaudiness of production and costume design. You don’t seem to go for mimicry, but rather, you supplant it with something else. Your use of dolly shots, in particular, almost lends a horror aspect to the film.

Strickland: Interesting. That was not intentional. I guess, it was more like a gothic fairytale element. But for me, it was always going to be in tandem, in this contained realm. You feel that it’s consensual. It goes off into betrayals, but you know they’re not going to kill each other. Though I’m aware that some people were suspecting, or maybe hoping, that it was going to go in that direction.

Filmmaker: There is that fantastical element towards the end with the crotch of doom, which touches upon Evelyn’s anxieties about being attached to another person. I find that sequence to be consistent with sexploitation films wherein the third act tends to go haywire.

Strickland: What’s interesting about sexploitation films, especially the good ones, is that all the director had to do was put in five or six scenes of sex, and that was it. Boxes ticked. They could do what they wanted in between, since that was all the producers cared about. So in between those scenes, you could find these remarkable sequences which no one gave notes on, but they’re really, really out there. You think of stuff from A Virgin Among The Living Dead, Lorna the Exorcist, or Venus in Furs, and there is some really strange, lyrical stuff, and I love that about that cinema.

Filmmaker: I’m curious when you pitched this to the actors, what did you describe it as?

Strickland: Well I’m very lucky in that I just had to send them the script. And I write it more explicitly on paper, so there are no surprises on set. We don’t need to talk about it. Do you want to do it, or no. But we certainly had rejections.

Filmmaker: Was there nudity in the script?

Strickland: Yes, but of course we didn’t put any in in the end. As I was revising it, I heard about Blue is the Warmest Color and Nymphomaniac, and I just thought, “I don’t want to turn this into a competition.” Let’s try something different.

Filmmaker: When you’re working with the actors on something as finite as this, do you bother creating back stories?

Strickland: No. I really didn’t want to do that. That was very important for me. I didn’t want to have some sort of apology for their desires. It was about the situation they’re in now, how do you deal with that? Once you are in a relationship with someone, if there’s something they need or want, that you find distasteful, how do you deal with that? Someone always has to compromise. Had they both been into sadomasochism, that wouldn’t have been an interesting film for me to make. I wanted to look at two different people in a couple who have two different needs.