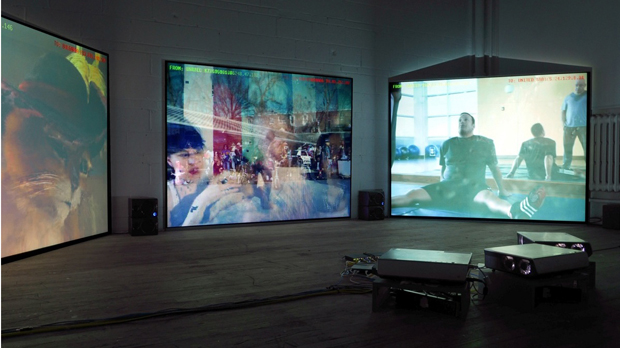 by Randy Astle
in Directors, Filmmaking, Interviews, Transmedia
on Feb 23, 2015

Since 1988 transmediale has been one of Europe’s premiere events for showcasing transmedia and technology for art and narrative and nonfiction storytelling. Director Kristoffer Gansing (who spoke with Filmmaker last year) and his team continue to assemble cutting-edge films, installations, performances, workshops, and other events, turning the House of World Cultures in Berlin into a hub for all things new media. It ran last week, and I spoke with a number of artists who presented video-based pieces at the festival.

Nicolas Maigret is a French artist who has been active since 2001. His work explores the internal functioning of media like the Internet by making its processes — and failure thresholds — visible. He’s worked at the Locus-Sonus lab in Nice, cofounded the Art of Failure collective with Nicolas Montgemont, taught at schools like the Fine Arts School of Bordeaux and Parsons Paris, and exhibited work around the world.

His piece The Pirate Cinema, done with programmer and artist Brendan Howell, makes visible the innumerable streams of bit torrent data circulating around the globe. It was featured by Filmmaker last February (which includes a video of the piece in action) and now exists in a live-presentation format, as a three-screen installation like that featured at transmediale, and in an ever-developing online version (plus as a book).

Filmmaker: Your work deals with the “dysfunctions, limitations, and failure thresholds” of media and technology. What does that mean? Can you talk a bit about your art practice?

Maigret: I mean that the core of my art practice is not to create artworks per se. Rather, I want to set up the minimal conditions to apprehend existing elements that are not yet visible. I think that visibility is a key point in understanding a subject — and its underlying components. So I try to bring hidden qualities of our everyday technological tools into the field of human experience.

Maigret: I’ve worked on multiple projects where the purpose was to bring back the network’s physicality to the visitors’ experience. [Maigret’s piece Internet_Topography transforms an Internet signal into an aural and visual piece of art.]

After this previous work and research, I wanted to get some distance from the idea of the network as an autonomous entity and put Internet users, and users’ practices, back in the center of my research. That’s where the Pirate Cinema concept started. The goal was, on the one hand, to respond to the omnipresence of users on the Internet and how their activity is constantly surveilled. But more specifically, I wanted to focus on file sharing networks, where people are monitored daily, resulting in real life lawsuits. So the idea behind The Pirate Cinema was to visualize this system as a means to reveal the vitality and the dynamics of those exchanges and the culture that engages in them.

On the other hand, I guess it’s a kind of tribute to the Copy Culture – highly intensified since the introduction of the personal computer in the 80’s – which has been a key articulation of the last 30 years of digital culture. For the last 15 years, P2P networks have served as a great resource, obviously for mainstream content but also for valuable rarities and unknown content that is hardly accessible otherwise. File sharing has been central in the access to culture worldwide. The Pirate Cinema tends to make those activities and dynamics tangible.

Filmmaker: It was created as an installation, of course, so why are you developing an online version?

Maigret: With the installation version, the project has been turning up in many places, but obviously art spaces mainly, and for limited durations. It seemed necessary to get rid of those limitations and, also, to make it visible outside the ghetto of art spaces.

Filmmaker: The installation has shown in several venues now, though transmediale will be its German premiere. What was the technical process like putting it together?

Maigret: We have a dedicated machine connected in a datacenter. This computer keeps downloading and sharing the top 100 shared files on BitTorrent (using LibTorrent; see http://thepiratebay.se/top/200).

Then, in real time during the sharing process (at http://thepiratebay.cr/top/200), we show the video content of each sent chunk (or data packet), along with the IP address and country of the last peer we got it from and the peer we are sending it to (using GeoIP). We’re able to monitor many more chunks than what we can actually stream in a single channel. So the live online stream just shows as much as it can render (using MLT / FFmpeg). The physical installation piece shows a bit more as it is a three-screen set-up.

The live performance version, while fundamentally the same, is a bit different. It’s structured in six acts and goes through a “subjective history” of online file sharing, which you can read about in a lot more detail here and here. Each part is monitoring a specific selection of torrents to reveal and focus on stories like:

*  The oldest torrent on TPB (a pirated restaurant recipe book)

*  The Napster vs. Metallica case (a game changer in the P2P file sharing)

*  The numerous versions of blockbuster films/files, meaning it monitors a single movie, including all the different pirate releases so far from the first smartphone shoot inside a crowded theatre to the last Blu-ray copy

Filmmaker: That’s an impressive amount of information — and data. What was your collaboration with your programmer Brendan Howell like while developing the data interception software?

Maigret: Actually, we started with a clear concept and then we needed to experiment a lot to find the possible implementation of the idea. After about a year we had a first version monitoring about 20 torrents at once. Since then, we frequently try to optimize or tweak the system for different contexts of presentation. Brendan is an artist and a very skilled computer programmer (as his website shows).

Filmmaker: The software selects clips randomly, but were there any trends — or surprises — that you saw when you first saw it in action?

Maigret: I often notice interesting patterns while researching on this project. For instance, the missing countries: if you check the online version, you will see that some countries are nearly absent. In the case of Germany that reveals the legal system in place, where you should use VPN to escape ISP surveillance. VPN will route your data to a foreign IP. In the case of China, it shows something about their semi-isolated Internet. But I guess it also reveals a lot about the local culture facing property and piracy. They have no moral concern about copying. You can basically find the equivalent of Pirate Bay as cheap DV’s in the street.

Another aspect is the geographical dissemination of different content. Some American content tends to spread worldwide, but rarely the other way around.

Filmmaker: Any lessons narrative or documentary filmmakers might take away from all this?

Maigret: The business of filmmaking does actually use the torrent infrastructure a lot. In parallel to lawsuits for copyright infringement, they’ve also developed a pretty creative approach to their anti-piracy efforts. They would, for instance, hire smaller companies that use plenty of techniques to pollute the network, inject fake content, insert an unknown artist instead of the targeted one, etc. But, on the other hand, the torrent network is also used to track trends, statistics, geographic tastes, etc.

It seems that after ten years of intense video file sharing, the big productions need to have something special to attract people to the theater: 3D, high quality, and so forth.

Filmmaker: For the rest of us, I guess there’s always the Internet! Thanks so much.