“That’s a Wrap!” The 414s Director with a Sundance Post-Mortem 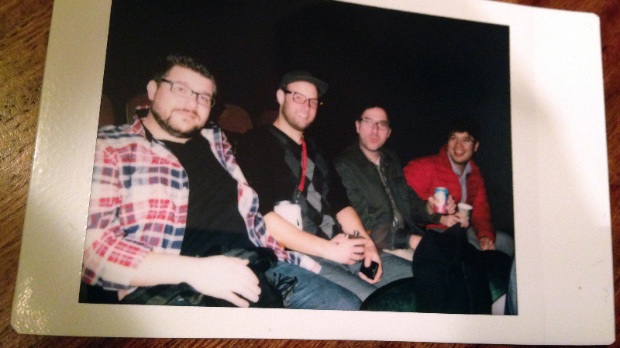 by Michael Vollman
in Sundance, Sundance Features
on Feb 5, 2015

Well, that’s a wrap! The Sundance Film Festival came to a close this weekend, and my filmmaking partner, Chris James Thompson and I are already back with our families in Milwaukee. We attended three of the five scheduled screenings for our film, The 414s: The Original Teenage Hackers. The week was sometimes intense, sometimes boring and often enlightening.

By our second day it became clear why people love the Sundance Film Festival; the film screening portion of the fest is pure cinema. The hot and sweaty pop-up theaters are always full as volunteers pack in human bodies like Tetris pieces, and the audience members are true cinephiles who enjoy watching three to four to five films a day. Once the lights go down there is a striking absence of extraneous advertisings, trailers and hoopla before the films begin, and afterwards few members of the audience vacate, but instead sit intently asking and listening to dozens of thoughtfully proposed questions. Every screening is a truly informal and intimate affair, like eavesdropping on filmmakers talking amongst friends in their living rooms. Sometimes fights even break out!

Outside on Main Street things felt quite different – exclusiveness and wealth reign supreme. We felt it first hand; after our premiere we walked with a couple friends up and down the hill trying to find a celebratory cocktail, but were turned away from private party after private party. Our film credentials were of little use here where giant corporate sponsors and bouncers combine to form a bizarro mini-Hollywood. Amongst the glowing Christmas lights on the sloped darkened mountain it was obvious it was more about who you know, instead why you were there. I can see how a first-time filmmaker could feel defeated by the scene, but for us Sundance was less of a final destination and more like a stop on a long difficult road of making truly independent films.

If I had any ill feelings after our fiasco-ed attempt at partying, they were erased the following morning. I had been invited to spend the morning at the Sundance Mountain Resort where over 120 directors filled three coach buses and trekked almost an hour to the isolated compound for brunch. After mimosas and Bloody Mary’s, Robert Redford appeared at the podium and explained why it was necessary to have us travel the distance to this meeting spot. Here, he said, was where the true spirit of Sundance radiated from, where creativity, heart and nature take precedent over everything that was happening over on Main Street. He shared how the initial philosophy of Sundance was to create a safe place where filmmakers could express themselves, be bold, and take risks.

I took his words to heart as I stood amongst so many talented and accomplished peers. His words grounded me, and reminded me that the true beauty of cinema isn’t in the parties, or the brunches, or even the sold-out screenings. The beauty of cinema – personally – is in making it. It’s sharing talents amongst friends, building each other up, and growing together by challenging each other. It’s laughing together through late-night, exhausting color corrections and sound mixes, and overcoming our own perceived limitations while learning about the world, and how it turns. Chris and I will continue to make films because we love the process of making them, and if we ever happen to be invited back to Sundance to premiere another film, that will be icing on the already delicious cake.

We would like to thank Ilinca Calugareanu and Mara Adina for allowing our film to play before their lovely feature documentary Chuck Norris Vs. Communism; to share the screen with Irina Nistor’s story for even a moment was a real treat.

And to Matthew Broderick – if our agent Andrew Swant calls – let’s make The 414s feature!