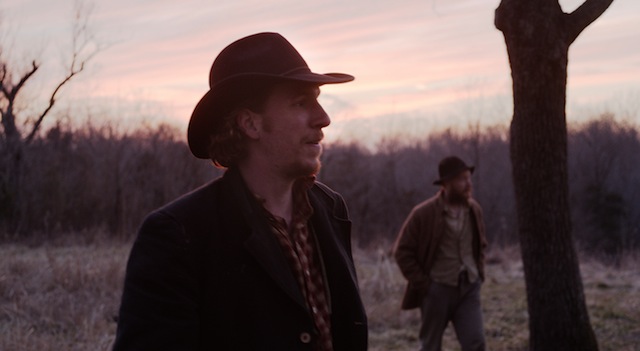 by Sarah Salovaara
in Directing, Director Interviews, Filmmaking
on Apr 17, 2015

Hats off to director Zachary Treitz and co-writer Kate Lyn Sheil for sidestepping the more introspective, resource heavy trends of much contemporary independent filmmaking, and swinging for the fences with their Civil War period piece, Men Go To Battle. Set in 1861 Kentucky, the brothers Francis and Henry Mellon (Tim Morton and David Maloney) are desperate to scare up some funds for their overgrown farm before winter arrives, but the pair’s constant quarreling is a hindrance to much progress. Eventually fed up with Francis’ heavy drinking and general flippancy, Henry takes off to join a far more populated battle amidst the Confederate army.

Gorgeously lensed by Brett Jutkiewicz, Men Go To Battle successfully juggles the intimacy of a fraught fraternal drama with the implications of its loaded historical setting. Filmmaker spoke with Treitz and Sheil about the extensive logistics behind a low budget period piece, narrowing the film’s scope, and more. Men Go To Battle world premieres in Narrative Competition tonight at the Tribeca Film Festival.

Filmmaker: Period pieces alone are ambitious undertakings on a relatively low budget, but this one covers so much ground. What were some of the challenges you faced in rendering several settings from the mid-1800s, and how were you able to circumvent them?

Zachary Treitz: We wanted to create the sense that the story could go anywhere, that nothing in the characters’ lives is predetermined. We didn’t want this feeling to be limited by our budget, which meant seeing a lot of different locations and environments.

Kate Lyn Sheil: The movie hinged on whether or not we could find our two main locations: the cabin and the town. Zach and I drove all over Kentucky, Indiana, and Virginia searching, but we were coming up dry. There are plenty of dilapidated log cabins, but the trick was in finding buildings that were period appropriate and also in good shape, could pass for relatively new. We were about two weeks out from our first big shoot and still hadn’t locked down our location, the home of the two main characters, when our producer Steven Schardt called. He had been on a nature walk at a farm just outside Louisville and stumbled across a stone cottage, the one you see in the film.

Treitz: It was the kitchen of a stage coach stop in the early 1800s, and had survived because it was stone. Jake Heustis and the rest of our art department then had to take off a 1970’s porch addition, replace the roof, etc., until it looked like it was actively lived in.

They thought that was bad, but then they met the real nightmare: creating a small 1861 town. One of our actors knew this small town that a lawyer named Bob Griffith had preserved. But it was on a main highway outside of Fort Knox and we knew we would have to cover the road with dirt…we calculated about 13 tons of dirt. But once we started putting up signs to warn people about this, that’s when the local newspaper articles started showing up, then the editorials, then the calls from state senators, and finally the death threats. People really didn’t want us to close the road for a day, which I understand, but threatening to shoot someone over a 20-minute inconvenience seemed a little extreme, even for Kentucky. It probably didn’t help that it was hunting season. We moved around our schedule to accommodate the locals before the dirt went down. There were a few people who drove right through our barricade to show us who was boss, but most everyone else was simply interested in what we were doing.

One of our first thoughts for how to pull off the feeling of this huge world was to shoot at Civil War reenactments, but we had never been to one. The reenactment community is pretty wary of outsiders, and it took a lot of explaining and convincing until they let us in. Just a few of us would show up, dressed up in 1860s civilian clothes, pretending to be war correspondents, as we followed our actor Tim around for these long weekends. By the end of that first weekend, which was a huge event with thousands of reenactors, several of the soldiers came up to us and told us they hadn’t ever seen a camera crew that was so inconspicuous and respectful, and we went from there.

Filmmaker: I believe this is both of your first times co-writing a script, so can you speak about that process? Would you write individually and then piece scenes together?

Sheil: Zach and I would work on the outline together then write scenes individually. We’d then hand those over for revision to the other person. Once scenes were placed in the script, we’d read it top to bottom, whatever we had at that point, and discuss how we felt about it. It was an evolving process that was informed by research and eventually by rehearsal with the actors.

Filmmaker: I wanted to ask about your decision to leave out one of the defining points of the Civil War — slavery — and the economic impact that would have had on a town like the Mellons’. When Francis tries to sell his land, there are some intimations as to why nobody’s buying, but nothing explicit.

Treitz: We wanted to tell the story through the eyes of these two brothers who are further down in rural Kentucky society than they’d like to be. We researched what they would see and experience by combing through archives of unpublished diaries and letters of the time, and doing a fair amount of background research. The story takes place in the Upper South, and in the county in particular that we were imagining, the population was about 13 percent slaves. Henry and Francis do not own slaves, but when they go to a more affluent family’s house, there are certainly slaves. We wanted to see the culture and society of the time through the eyes of the characters. The lack of judgment from the characters in the story to me makes something like slavery all the more horrifying… that you can have these seemingly nice people who own human beings, and everything else that goes along with that.

Sheil: We never wanted to make a movie about the Grand Old South. The story is a very middle class one, very regionally specific to Kentucky. The area where the movie takes place was not one of a plantation culture and the two main characters of the film are too poor to be slave owners. That having been said, slavery was something that we obviously thought about constantly and never took lightly. We didn’t want to let any of our characters off the hook by allowing them to have moments of uncharacteristic foresight or intelligence; we didn’t want to ignore the terribly racist climate of the time, but we also didn’t want to artificially impose scenes on the movie where we, as twenty-first century filmmakers, expressed our disapproval, guilt and shame through the mouths of characters from whom those sentiments would seem uncanny.

Filmmaker: The cinematography is really strong. What were some of your reference points — historical or filmic — in shaping the texture of the film?

Sheil: To my memory, the primary movie references for us were Peter Watkins’ Edvard Munch and Andrea Arnold’s Wuthering Heights. We wanted to buck the oppressiveness of the period piece by shooting close, divorcing ourselves from the most “beautiful” visual approach by resisting the urge to fetishize the landscape.

Treitz: It’s hard to make a preindustrial period piece without referring to how Kubrick shot with candles in Barry Lyndon. But we were aiming for something a little less formally composed, something a little rougher. Brett Jutkiewicz, our cinematographer, really created a way of working with the actors and the environments that felt alive and nimble. And he can’t seem to help but make things beautiful, even if it wasn’t our first concern. Brett was a collaborator on the entire project.

Filmmaker: A successfully cast period piece requires little suspension of disbelief, and the two leads certainly fit the bill, which may have been helped by the fact that I’d never seen them in anything before. How did you find Tim Morton and David Maloney, and, broadly, where did the idea to shape the film around two brothers come from?

Treitz: I know Tim and David from growing up in Louisville, Kentucky. David and I made a couple short films over the years, and the two of them were good friends who grew up together. They made a lot of incredible little movies together in high school and had a shared sense of humor, and nearly identical voices and speech patterns. To make them brothers was not far-fetched, and putting these two in 1860 makes just as much sense when you see them. Something between their physiognomy and their slightly insidery way of talking between each other really fit the time and place.